A Conservative election candidate has apologised to his Labour rival after accusing the Sikh of ‘talking through his turban’ at a campaign hustings.

Phillip Dunne, who has been the MP for Ludlow in Shropshire since 2005, faced calls to be binned by the Tory party after making the ‘extremely insulting’ jibe to Kuldip Sahota last night.

After the public church hall debate, Mr Sahota wrote on his Facebook page: ‘Dunne insults Kuldip: “Kuldip you are talking through your turban”.

‘Only after prompt by Kuldip did Dunne offer “unreserved apology”. Appalling!’

The former Conservative defence minister has not disputed the Labour would-be MP’s version of events, and today expressed regret.

Phillip Dunne, who has been the MP for Ludlow in Shropshire since 2005, faced calls to be binned by the Tory party after accusing his Sikh Labour rival of ‘talking through his turban’ at a campaign hustings 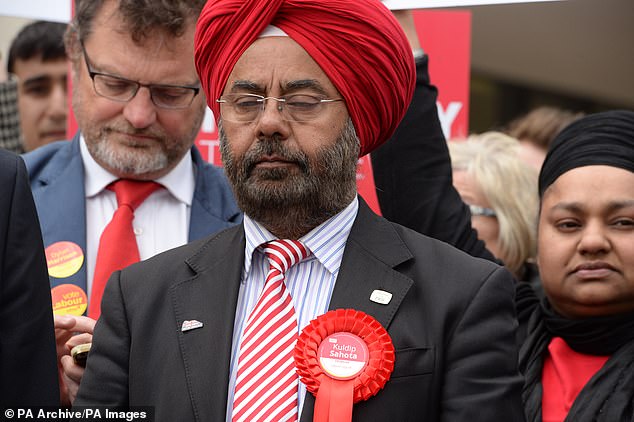 Mr Dunne said: I apologised to Kuldip Sahota for my comments last night. I apologise again unreservedly for the offence caused.’

But Mr Sahota claims that the Tory only apologised some 20 minutes after making the turban remark.

He said: ‘He jumped up and said, “sorry”, he apologised. But he didn’t apologise straight away,’ according to the Shropshire Star.

‘He was on the microphone a couple of times after his remark and did not apologise.

He added: ‘I was shocked and deeply hurt that someone who was an MP for 14 years would make such a derogatory comment about the Sikh faith.

‘This is extremely insulting to the Sikh community.’

Angry voters bombarded Mr Sahota’s Facebook post with scolding comments aimed at Mr Dunne, which included calls for the Tory to be axed as a candidate.

Jen Cox, who claimed to be in the audience at the hustings, said: ‘This was absolutely appalling, and the lack of reaction from most of those there was just as bad, seemed only a few of us were shocked.’

After the public church hall debate, Mr Sahota wrote about the ‘appalling’ remarks on his Facebook page

Tanmanjeet Singh Dhesi, Labour candidate for Slough who memorably challenged the Prime Minister over racism in the Commons chamber, piled in with the criticism

Members of his own party even rounded on Mr Dunne, with the Sikh Tories condemning his comments as ‘simply unacceptable’.

The group tweeted: ‘We’re disappointed by the offensive remarks made by Philip Dunne at the Ludlow hustings.

‘These comments are simply unacceptable. We recognise he has already apologised, and hope he and others will consider their words before referring negatively to the Sikh crown in future.’

And Tanmanjeet Singh Dhesi, Labour candidate for Slough who memorably challenged the Prime Minister over racism in the Commons chamber, piled in with the criticism.

He tweeted: ‘Appalled by Tory candidate’s humiliating remarks about a Sikh turban, which we consider a crown. So many fought and died for Britain wearing that very turban.

‘Boris Johnson any action being taken or are you letting racism fester further within your Party?’