Tory donors say May must prepare no deal Brexit

A Tory donor has blasted Remain-backing Cabinet minsters for being too soft on the EU in trade talks – comparing them to people with Stockholm syndrome.

Conservative funders say Theresa May should walk away form Brexit negotiations rather than accept a bad deal from the bloc.

Jeremy Hosking said some ministers sound so pro EU they appear like they suffer from Stockholm syndrome – when hostages bonds with their captors.

The Vote Leave and Tory donor said Britain must be prepared to walk away if it looks as if the bloc is determined to ‘kick us in the teeth’ and give us a punishment deal.

The comments are a sign of the growing frustration among the pro-Brexit wing of the Tory Party after EU leaders continue to refuse to move on to trade talks despite a strong of major compromises by Mrs May.

The Brussels club is continuing to press Britain for more money for the divorce bill before it  moves on to the next phase of talks.

Theresa May, pictured with her husband Philip heading to church in Maidenhead this morning,  has been urged to walk away from with no Brexit deal rather than accept a bad one

He said: ‘The EU is stonewalling on the divorce bill, increasing intolerably the political pressure on Mrs May, and we still have no idea whether the trade deal will be beneficial to the UK, or whether they will kick us further in the teeth when we are down.

‘Maybe our EU friends will squeeze us on trade as well as on alimony? They have repeatedly said that Brexit must be bad for us.

‘Maybe our own Remainers will cajole us into a high exit fee and an disadvantageous trade deal? It’s not apparent in the Brexit context that our European partners wish us well.

‘Clearly we are now in a vulnerable position and some members of our own team, including Cabinet ministers, appear to be keen to increase our fragility.

‘Is it any wonder that talk of Brexit sabotage stalks the land? One is reminded of Stockholm syndrome.’ 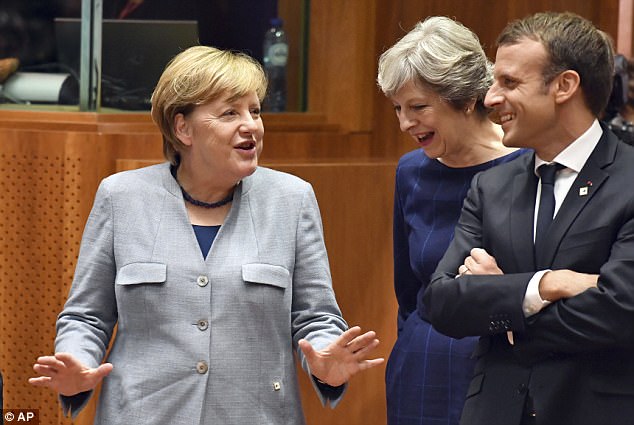 Theresa May met with Angela Merkel and Emmanuel Macron when she visited Brussels earlier this month to urge EU member state leaders to move on to post-Brexit trade talks. But they rebuffed her request

David Lilley, another donor to the Conservatives and Vote Leave, said: ‘Why would there be any motivation for the EU to give any deal concession if they know that we can’t walk away?

‘The only people who should logically take the position of seeking to make the UK unable to reject unfavourable and punitive terms are those who are negotiating for the EU. It would not be a logical position for anyone who has the UK’s best interest at heart.’

Mrs May travelled over to Brussels earlier this month to go over the head of the EU and appeal directly to member state leaders to move on to trade talks.

But her plea was rebuffed and the countries refused to start the negotiations with Britain – instead saying they would merely have talks between themselves to prepare their position.

The negotiations have become so dragged out that many believe that trade talks will not start now until after Christmas.