Jeremy Hunt today demanded that Boris Johnson stop being a ‘coward’ – as Sky News was forced to cancel a TV debate after the front runner declined to take part.

In an extraordinary full-frontal assault, Mr Hunt also taunted Mr Johnson that he was ‘going to lose’ the battle for the leadership.

The dramatic escalation came as Mr Johnson came under intense pressure to sign up for a Sky New head-to-head debate tomorrow – with the broadcaster complaining that his refusal was forcing them to cancel the showdown.

Mr Johnson has been accused of hiding in his bunker by avoiding the face-off, as well as shunning interviews – including with Piers Morgan – and limiting questions from journalists. Mr Johnson has agreed to an ITV debate on July 9, but some activists will already have voted by then.

At hustings over the weekend, Mr Johnson flatly refused to address the explosive row with his girlfriend Carrie Symonds at their south London flat. Neighbours called the police, who took no action, before handing the recording to the Guardian.

In a round of broadcast interviews today, Mr Hunt said: ‘On the question of debates, he is being a coward.

‘It is very disrespectful to say that you’re not going to appear in any head-to-head debates in the two weeks when (party members) can see you before they’ve actually voted.’

‘People need to know what you’re going to do and you need to answer those questions,’ 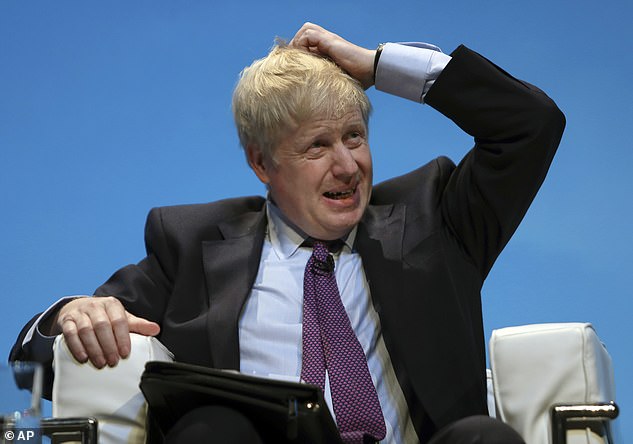 Boris Johnson (pictured at hustings in Birmingham on Saturday) said the UK had to be out by Halloween ‘come what may’, urging his colleagues to keep their ‘eyes on the prize’ 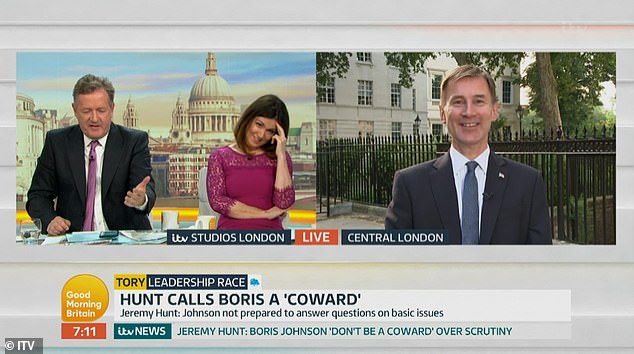 Mr Johnson remained tight-lipped about the spat with Miss Symonds when he was grilled at a hustings for party members in Birmingham over the weekend.

But MailOnline today obtained exclusive images of the couple hand-in-hand and smiling in the Sussex countryside yesterday afternoon, undermining claims their relationship is in crisis.

A friend dismissed claims they were splitting up as smears and revealed the Tory leadership favourite, 55, intends to marry his girlfriend ‘as soon as the time is right’ after his divorce from second wife Marina goes through.

What happens now?Tory leadership rivals face three weeks of hustings in front of the party faithful

Jeremy Hunt and Boris Johnson face four weeks of campaign events where they will set out their stall to the 160,000 Conservative members who will decide who enters No10.

The party has organised 16 hustings events across the country – with the first having taken place in Birmingham over the weekend.

There are also a series of head-to-head TV debates mooted. Mr Johnson has refused to sign up to a Sky News show tomorrow, but is expected to take part in an ITV special on July 9.   A new leader will be announced on the week of July 22.

Mr Hunt, who has insisted Mr Johnson should answer questions on ‘everything’, said today that his opponent was trying to ‘slink through the back door’ of No 10 and avoid public debate.

‘One of the strengths of our system is that we scrutinise our politicians with more intelligent ferocity than anywhere else in the world. But in this case it just isn’t happening,’ he said in an article for The Times.

‘Nothing could be worse for a new prime minister in these challenging times than to come to power with a fake contest.

‘I am not interested in debating Boris’s private life. But I do want to quiz him on how he can ‘guarantee’ we will leave the EU on October 31 if Parliament votes to stop a No Deal Brexit, as it did in March.

‘I want to know what he really means by ‘reviewing’ HS2 or his ‘grave reservations’ about the third runway – surely he has had long enough to decide what he thinks?

‘Don’t be a coward Boris, man up and show the nation you can cope with the intense scrutiny the most difficult job in the country will involve.’

‘You cannot become Prime Minister and not answer questions about the decisions you are going to have to make about Brexit immediately.

‘The real danger we have got with Boris not coming on the show is that he is going to come to power on a very fragile coalition. ‘

Interviewed by Piers Morgan and Susanna Reid on ITV’s GMB, Mr Hunt said Mr Johnson was stoking up trouble as his supporters included people who want No Deal taken off the table, as well as those who favour it.

‘Sometimes in politics you can fudge and get away with it, but in the case of Brexit, you are going to have to make decisions immediately and that very fragile coalition will collapse immediately,’ he said.

‘If that happens, we won’t have another leadership contest, we will have Jeremy Corbyn in Number 10 and then there won’t be any Brexit at all. One thing he won’t be able to do is deliver Brexit.’

Sky News said Tuesday’s planned debate would not go ahead unless Boris Johnson agreed to take part, but offered an alternative date of July 1 in an effort to get both candidates to appear. 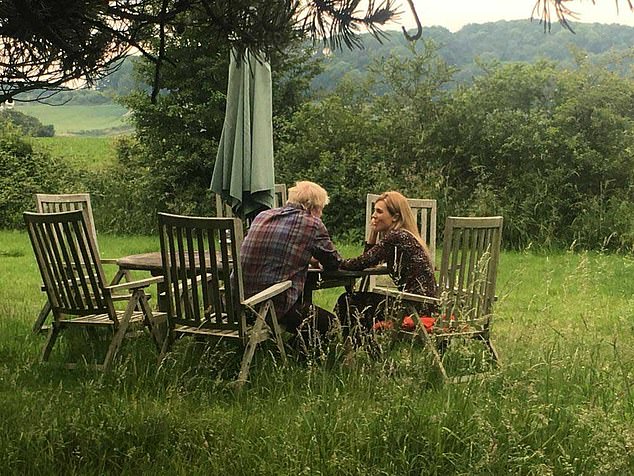 Mr Hunt said Mr Johnson (pictured with Carrie in Sussex at the weekend) appeared cowardly, and wanted to ‘slink through the back door’ of No 10 and avoid public debate 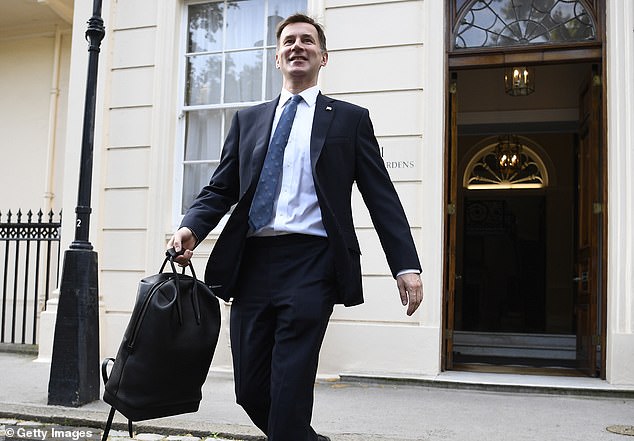 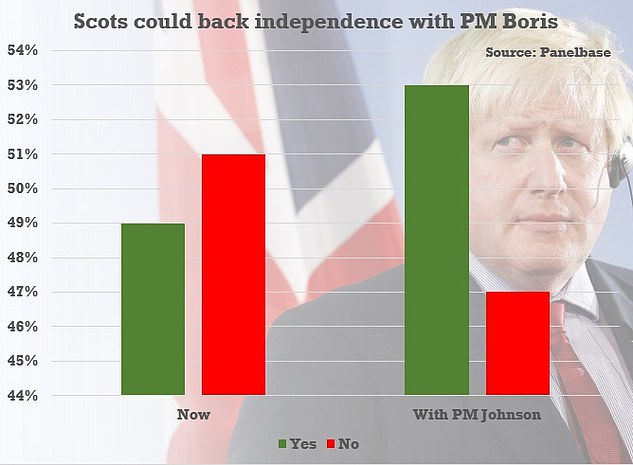 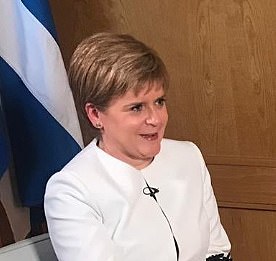 Nicola Sturgeon has gloated that Boris Johnson will be a ‘disaster’ for the Tories – as a poll found Scots could vote for independence.

A spokesman said: ‘Sky News has been planning to hold a debate tomorrow between the two remaining candidates in the Conservative leadership election.

‘Jeremy Hunt has agreed to take part but Boris Johnson has so far declined the invitation.

‘We stand ready to host a debate tomorrow evening if both candidates make themselves available. ‘Without both candidates, tomorrow’s debate will not take place.

‘But we will reissue our invitation for Mr Hunt and Mr Johnson to debate live on Sky News next Monday, July 1.’

A source on the Hunt campaign said: ‘Bottler Boris and his complacent campaign have shown they can’t trust their candidate to turn up and perform.’

Dr Fox told the BBC yesterday: ‘I think it is always easier to just give an explanation. It is inevitable there is a focus on private lives. That does not concern me. What I am concerned about are the issues.’

Tory grandee Sir Malcolm Rifkind said: ‘If you are a candidate to be prime minister and the police have been called to your house – fairly or unfairly – the fact is there was a police visit. You don’t just say ‘no comment’.

‘That implies you may have something you don’t want to disclose. It was a lack of judgment to refuse to even make a short comment.

‘All he could have said, quite reasonably, would have been that in all relationships there are occasionally outbursts of anger and disagreement.’

He rejected the idea that Mr Johnson should be allowed to draw a distinction between his private and public life.

But Chief Secretary to the Treasury Liz Truss, who is backing Mr Johnson, yesterday insisted the altercation was not of public interest.

She said: ‘I believe it’s a private matter. I don’t think the public are concerned about that. I think Boris is somebody who for eight years as mayor of London did a brilliant job, he served as foreign secretary, people know what he’s like in office, and that’s what’s important.’

She warned against complacency as she suggested it was not certain that Mr Johnson would become the next Tory leader – and prime minister.

Boris and Carrie still ‘very much in love’

Boris Johnson and his girlfriend Carrie Symonds have been spotted looking smitten with friends saying they are still ‘very much in love’ despite a late-night row that saw the police called in by neighbours.

Today new and exclusive images of Boris and Carrie have emerged showing them hand-in-hand and smiling in the Sussex countryside yesterday afternoon, undermining claims their relationship is in crisis.

A friend of the couple has told MailOnline that claims they are splitting up are smears and revealed the Tory leadership favourite, 55, intends to marry his girlfriend ‘as soon as the time is right’ after his divorce from second wife Marina goes through.

On Friday the couple were spoken to by police after a blazing row and have now been forced to flee their South London home after a gang of anarchists set up camp on their doorstep yelling abuse and slapping ‘f*** Boris’ stickers on the front door.

‘It’s always dangerous to be complacent and believe that things are inevitable,’ she said.

Miss Truss also said Mr Johnson would call the bluff of rebel Tory MPs threatening to bring down the Government if he pushed through a No Deal Brexit, adding: ‘My view is that Boris Johnson is somebody who is capable of commanding the support of the country and the support of the parliamentary party and I don’t believe my colleagues would vote no confidence and risk a Jeremy Corbyn government.

‘We need a leader with the determination to follow through, go through to the 31st October, leave preferably with a deal, but without a deal if necessary – and I do not believe in those circumstances those Conservative colleagues would seek to bring a Conservative government down and let in Jeremy Corbyn and his Marxist agenda.’

But Mr Fox warned that Mr Johnson’s claim that World Trade Organisation rules could be used to avoid tariffs under No Deal was false. He rejected the suggestion that the UK could secure a ten-year standstill in current arrangements if it left without a deal. He also said Mr Johnson’s argument that under No Deal the country could use a transition period to negotiate a free-trade agreement ‘doesn’t actually hold’.

‘If you don’t get the withdrawal agreement through Parliament, there is no implementation period during which we can do anything at all,’ Mr Fox told the BBC.

Boris Johnson today vowed not to ‘bottle’ leaving the EU in October – despite warnings that least a dozen Tories are willing to torpedo his government if he tried to force No Deal.

The would-be PM said the UK had to be out by Halloween ‘come what may’, urging his colleagues to keep their ‘eyes on the prize’. 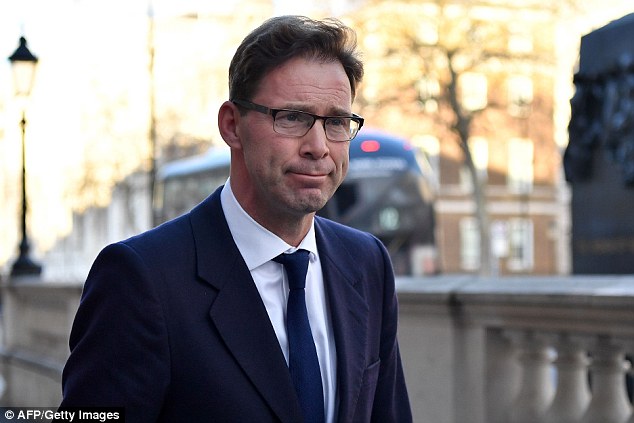 Former Cabinet minister John Nott today suggested that Mr Johnson was only pretending to want an agreement with the EU, and would prefer to leave without.