Tory leadership rivals stick the knife into May

The Tory party was in open rebellion against Theresa May tonight as six Cabinet members rebelled against the PM to back a failed Brexiteer amendment and another minister resigned to oppose a no-deal Brexit.

Sarah Newton quit her job at the Department for Work and Pensions in order to defy a last-ditch Government whip and vote against no-deal.

Four Cabinet ministers – David Mundell, Amber Rudd, David Gauke and Greg Clark – and Claire Perry, who attends Cabinet, abstained on the motion, which passed by 321 votes to 278 and makes a Brexit delay likely.

The rebellion for a soft Brexit left Mrs May battling on two fronts after six of her Cabinet ministers backed the hardliners’ so-called Malthouse compromise.

As Tory leadership rivals jockeyed for position, Foreign Secretary Jeremy Hunt and Home Secretary Sajid Javid were among 164 MPs who voted in favour of the failed Brexiteer plan.

Defence Secretary Gavin Williamson also backed the Brexiteer amendment, as did Commons Leader Andrea Leadsom, who challenged Mrs May for the leadership in 2016. 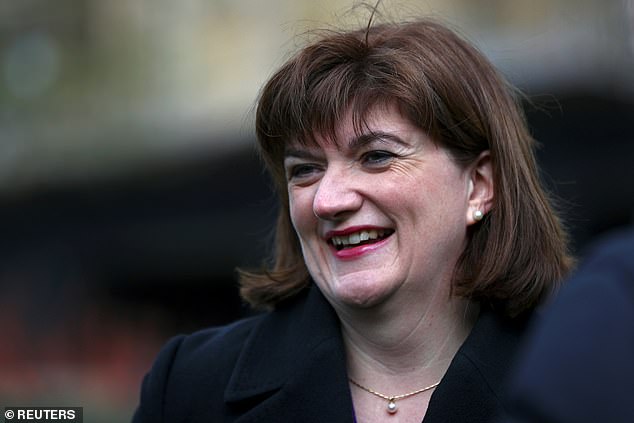 Nicky Morgan, the former education secretary, said senior ministers and other top Tory figures needed to have a ‘conversation’ about Mrs May’s future if sh lost a strong of Brexit votes this week

The Malthouse amendment, which would allow a no-deal Brexit but delay it until May, was heavily defeated in the Commons.

But the support from high-profile ministers will undoubtedly do their leadership credentials no harm among the party rank and file.

Including parliamentary private secretaries, who are expected to vote for the Government, there were 17 rebels on the final no-deal vote.

Fifteen including Miss Rudd abstained, while two – Ms Newton and Paul Masterson – voted against the Government.

Cabinet ministers were earlier urged to tell Mrs May to step down if she loses more votes this week.

Nicky Morgan, the former education secretary, said senior ministers and other top Tories should have a ‘conversation’ about her future if this week goes catastrophically wrong.

Ms Morgan, a Remainer who has in recent weeks seemed to ally herself with hardcore Brexiteers to help generate the Malthouse Compromise plan for a managed no-deal Brexit, spoke against the Prime Minister on Newsnight.

The Loughborough MP said: ‘I think her position is going to be very difficult if after the end of this week she has lost tonight and then the votes later on in the week go against her.

‘It will be up to the Cabinet to have that conversation. You have to do it as a collective, the Cabinet have to be working together on that.

‘The chief whip, the chair of the 1922 committee … If I was in Cabinet, I would be having those conversations.’

Meanwhile Chancellor Philip Hammond appeared to go off-script during his Spring Statement on Wednesday to make a veiled call for a softer Brexit.

The unabashed Remainer called for a compromise on what the Commons can agree to in the national interest to avoid a no-deal Brexit. 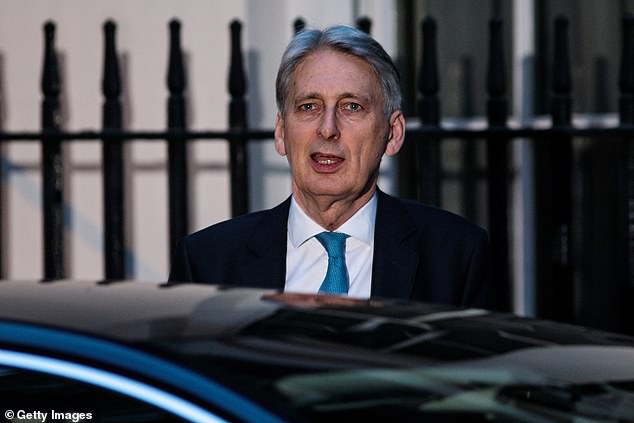 Mr Hammond today told MPs: ‘Tonight, we have a choice: we can remove the threat of an imminent no-deal exit hanging over our economy’

Treasury sources were quick to jump on suggestions of a fresh rift at the top of Government after he pleaded with MPs to lift the ‘uncertainty’ that ‘hangs over’ the UK because of the no-deal threat.

Mr Hammond had earlier warned Britain will face ‘significant disruption’ in the short and medium term if it crashes out of the European Union without a deal, as he called for no-deal to be taken off the table.

The Chancellor, delivering his Spring Statement to MPs, said there would be a ‘smaller, less prosperous’ economy in the long term, with higher unemployment, lower wages and higher prices in shops.

He said: ‘Our economy is fundamentally robust but the uncertainty that I hoped we would lift last night still hangs over it.

‘Tonight, we have a choice: we can remove the threat of an imminent no-deal exit hanging over our economy.

‘Tomorrow, we will have the opportunity to start to map out a way forward – towards building a consensus across this House for a deal we can collectively support, to exit the EU in an orderly way to a future relationship that will allow Britain to flourish.’

A Treasury source insisted Mr Hammond supported the Prime Minister’s deal, saying: ‘He has been very clear that he supports the PM’s deal but he has also been saying for months that compromise is how we get through this and he is calling for compromise.’ 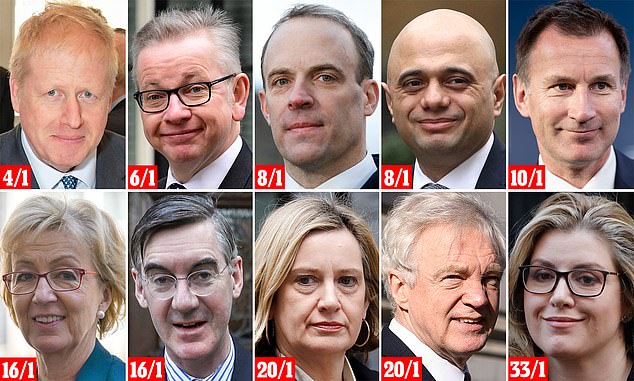 A host of senior Tory MPs are in the running to replace Theresa May before the next general election, including Boris Johnson, Michael Gove, Dominic Raab and Sajid Javid

Mrs May is facing increasingly heavy calls to step down in a matter of just weeks after her Brexit deal was rejected a second time by MPs tomorrow.

Mrs May agreed last December to step down before the next General Election, in a plea deal that saw her win a confidence vote of Tory MPs.

The hapless duo of Transport Secretary Chris Grayling and Northern Ireland Secretary Karen Bradley – both of whom would be out of a job were Mrs May not in charge – are said to be her only remaining loyal ministers.

Hardline Brexiteers have been calling for weeks for her to step down, saying they want one of their own to lead the next stage of negotiations with the EU.

But now it seems that a wider swathe of the party feels that they are in the dying days of the May administration.

One of her own MPs said that within months ‘the only negotiations Theresa will be doing are how much she can get for an appearance on Celebrity Bake Off’, according to the Guardian.

Others see a shorter time frame with some Cabinet ministers reportedly discussing whether she should step down at the end of this week.