Tory minister Claire Perry sparked a row on Question Time last night after she accused David Dimbleby of ‘hating it when women talk’.

The energy minister lashed out at Dimbleby when he cut across her as she tried to defend Theresa May’s divisive Brexit deal.

The veteran BBC host hit back, calling the claim ‘outrageous’ and asking the Tory MP to ‘accept there are five people on the panel’.

Miss Perry was speaking in support of the PM’s Brexit proposals after a day of political drama in Westminster which left Mrs May’s career hanging by a thread.

During last night’s show Miss Perry was defending Mrs May, saying: ‘We have a workable deal on the table and the alternative is inflicting needless harm on hundreds of thousands of people’s livelihoods’.

As she moved on to speak about a possible general election, Dimbleby tried to stop her mid-flow and let another panellist speak.

Looking at the audience, Miss Perry said: ‘I know you hate it when women talk’, prompting oohs and nervous laughter from spectators.

She turned to Dimbleby and laughed, but the 80-year-old BBC presenter was unimpressed, saying: ‘That’s outrageous. That is outrageous.’

Miss Perry tried to defuse the tension, saying: ‘I love you really’, but Dimbleby continued to defend himself.

He said: ‘I don’t want you to love me, I want you just to accept that there are five people on the panel and maybe the conversation should be in fifths.’ 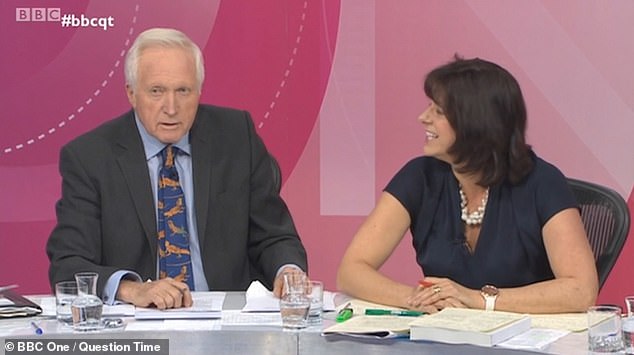 Veteran BBC host Dimbleby (left) hit back at Perry (right), calling the claim ‘outrageous’ and asking the Tory MP to ‘accept there are five people on the panel’ 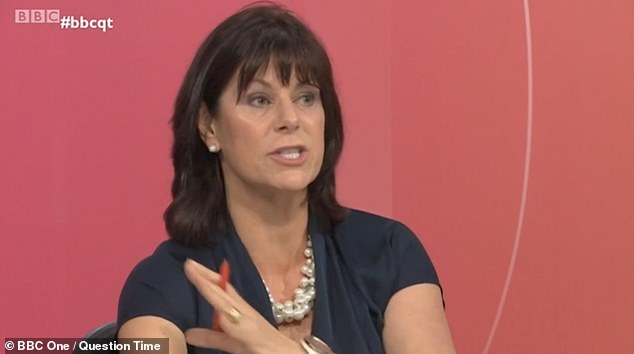 Labour MP Chris Williamson slammed her contributions, saying: ‘It was utterly contemptible for Claire Perry to resort to despicable smears on Question Time tonight when she was unable to defend her govt’s abject failure on Brexit.’

In an earlier Question Time appearance Miss Perry told Piers Morgan that ‘sometimes you have to actually listen to women’ when the Good Morning Britain host appeared on the show.

The 54-year-old was one of the ministers to come to Mrs May’s defence during Wednesday’s marathon Cabinet meeting.