A Tory minister’s researcher has appeared in court after he was accused of sexually assaulting a woman in the Houses of Parliament.

Callum Warren worked as a researcher for Chris Skidmore who represents the constituency of Kingswood, South Gloucestershire and was recently appointed Minister of State for Universities, Science, Research and Innovation.

The 26-year-old from Bristol, is charged that on July 12 he sexually assaulted a female in Room 220, of the Norman Shaw North building.

Today (December 27) at Westminster Magistrates’ Court, Warren spoke only to confirm his name, date of birth, address and nationality during the short hearing and was dressed in a blue suit, white shirt and blue patterned tie. 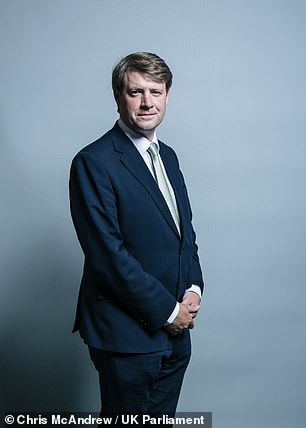 Chris Skidmore (pictured above) had employed Callum Warren as a researcher

Warren was notified of today’s court date by postal requisition and his lawyer Tom Warden indicated the charge would be fought.

‘There was no penetration and any sexual contact was consensual,’ he told District Judge Nina Tempia.

The judge told Warren not to contact the complainant, directly or indirectly by phone, email or social media to prevent further offences or interference with the witness.

He was bailed by Westminster Magistrates’ Court to appear at Southwark Crown Court on January 24.