A Conservative MP hit out of the BBC for ‘making Boris Johnson look like Hannibal Lecter’ in a bizarre interview – as allies of the PM defended him after a bruising confidence vote showed 41 per cent of his own MPs do not support his leadership.

After 148 MPs voted to remove him from office, supporters of Mr Johnson were quick to do media interviews trying to downplay the significance of the poor result.

One striking interview on BBC’s Newsnight had Tory MP Adam Holloway claiming that the corporation’s flagship news programme has made Mr Johnson look like fictional cannibal Hannibal Lecter and saying that voters knew that Mr Johnson was not a ‘Jesuit priest’ when he was elected.

In the now-viral interview, Mr Holloway said: ‘This programme that I am on now showed pictures of [Boris Johnson] looking like Hannibal Lecter’

In the now-viral interview, Mr Holloway said: ‘This programme that I am on now showed pictures of [Boris Johnson] looking like Hannibal Lecter.’

When challenged by the programme’s host, the MP for Gravesham doubled-down, showing a picture of the graphic on his tablet to the camera.

He then strangely asked: ‘Does that guy look like somebody who’s been given a birthday cake or someone who has just been locked up for something at the Old Bailey.

‘The British people knew when they voted for him and gave him an 80-seat majority that they weren’t voting for a Jesuit priest.’

He accused the ‘drip, drip, drip’ of Partygate stories of not amounting to anything despite the over 100 fixed penalty notices given out to staff over the scandal.

It was not the only notable appearance by a Conservative supporter of Mr Johnson during the day with Education Secretary Nadhim Zahawi also peculiarly declaring that Johnson’s damaging night would have seen Ukrainian President Volodymyr Zelensky ‘punching the air’. 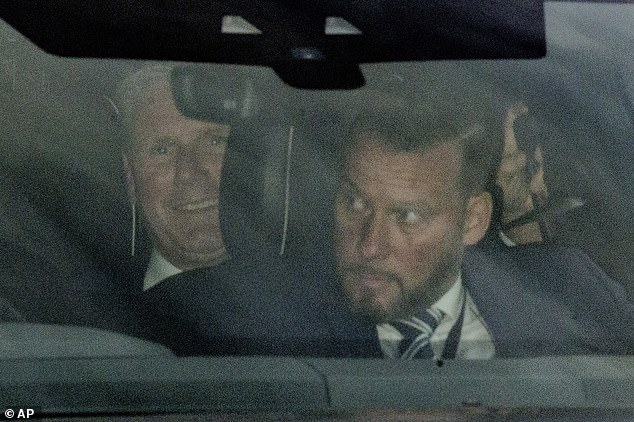 In an interview with Sam Coates of Sky News, the former vaccines minister called the tentative victory for Johnson in the confidence vote this evening ‘handsome’.

This analysis came despite it being lower than the margin of victory for Theresa May in 2018 which saw her premiership suffer and her resignation shortly after.

Culture Secretary Nadine Dorries said it is ‘time to get back to the job of governing’ after Boris Johnson won a confidence vote on Monday.

The Conservative MP for Mid Bedfordshire tweeted: ‘The person Starmer doesn’t want to face at an election is Boris Johnson who secured the biggest Conservative majority since 1987 and the highest share of the vote (43.6 per cent) of any party since 1979, with 14 million votes.

‘Time to get back to the job of governing.’

This was despite Starmer having consistent poll leads over Johnson in both voting intention for their parties and likeability of the pair as individuals.

Despite attempts to move on, Mr Johnson’s political opponents rounded on him to capitalise on the vote.

Labour leader Sir Keir Starmer said Mr Johnson was ‘utterly unfit for the great office he holds’ and accused Tory MPs of ignoring the British public after the vote.

He said: ‘The Conservative Government now believes that breaking the law is no impediment to making the law.’ 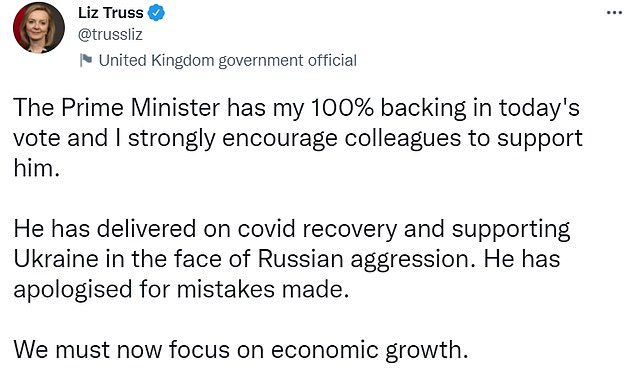 How does Boris’s result compare to previous Tory confidence votes?

Sir Ed said: ‘[Conservative MPs] have narrowly voted to keep a lawbreaker and liar in Number 10.

‘Whilst Boris Johnson has clung on today – make no mistake, his reputation is in tatters and his authority is now totally shot.

‘It’s clear that the Prime Minister and the Conservative Party are laughing at the British public.

‘Every Conservative MP who cares about integrity and decency must do the right thing, resign the whip and sit as an independent. For the sake of our country, this failing Prime Minister cannot be propped up any longer.

‘Johnson is teetering on the brink. He is too cowardly to resign – the people of Tiverton and Honiton will speak for Britain in giving their verdict on Boris Johnson in two weeks time.’

Scottish First Minister Nicola Sturgeon tweeted: ‘That result is surely the worst of all worlds for the Tories.

‘But much more importantly: at a time of huge challenge, it saddles the UK with an utterly lame duck PM.

‘And for Scotland, it just underlines the democratic deficit – only 2 of (Scotland’s) 59 MPs have confidence in the PM.’

Despite both reportedly harbouring leadership ambitions, Liz Truss and Michael Gove tweeted their support for Boris Johnson after his narrow victory.

The Foreign Secretary tweeted: ‘Pleased that colleagues have backed the Prime Minister.

The Housing Secretary said it is time to ‘focus on the people’s priorities’ now that the Prime Minister has ‘secured’ the trust of his MPs.

Gove wrote: ‘The PM has secured the support of Conservative MPs – now we must carry out what we were elected to deliver – levelling up, cutting crime, securing the benefits of Brexit and improving public services.’

‘Let’s get on with delivery and focus on the people’s priorities.’