Tory MP Nick Boles (file)  is pushing for a ‘Plan B’ Brexit if Theresa May’s deal fails said the proposals had ‘evolved’ today to make them easier to adopt.

A Tory MP revealed today he was ‘evolving’ a ‘Plan B’ Brexit to make it easier to agree with Brussels if Theresa May’s deal fails in Parliament.

Nick Boles, a former minister under David Cameron, said instead of trying to negotiate a brand new trade deal in just two years Britain should join a group called the European Free Trade Association (EFTA) in 2021.

This is a group of countries around the European Union which have close economic ties to the bloc but who are not full members. It includes Norway and Switzerland.

Joining EFTA would mean Britain continuing to follow many EU rules and staying in the single market – including keeping free movement.

It would still allow the UK to leave EU rules on agriculture and fisheries as planned, while keeping open the border between Northern Ireland and the Republic.

Mrs May dismissed the idea today as ‘not delivering on the vote of the British people’.

Mr Boles said if Britain signs up to the group after the Brexit transition period ends in December 2020, it will not ever have to use the Irish border backstop.

EFTA is a four member organisation that allows countries to trade inside the EU single market without having to be full EU members.

It currently includes Iceland, Lichtenstein, Norway and Switzerland and operates trading rules in parallel with the EU.

EFTA members are allowed to enter into trade deals with other countries, unlike EU member states – but members are expected to coordinate their activity.

Britain was a founding member in 1960 but quit the group to become a full member of the then European Economic Community, a pre-cursor to the EU.

He admitted today Britain would have to sign up for an ‘indefinite’ period without a planned exit unlike the backstop plan – but said it would avoid the complex arrangements for Northern Ireland critics claim damage the Union.

Mr Boles insisted Britain could still negotiate a new trade deal in future, using EFTA as a ‘platform’ to negotiate.

Some members of the Cabinet are said to be backing the ‘Plan B’ amid wide expectation Mrs May’s deal is doomed to defeat in Parliament on December 11.

Mr Boles said: ‘Good to see that people are taking Norway Plus seriously as a Plan B.

‘But important to note that it is very unlikely that Norway and other EFTA states will accept temporary membership. If we join it will need to be an indefinite commitment.

‘The Norway option has evolved in response to feedback from EFTA states and EU experts as well as understanding of the position of the different parties in Parliament.’ 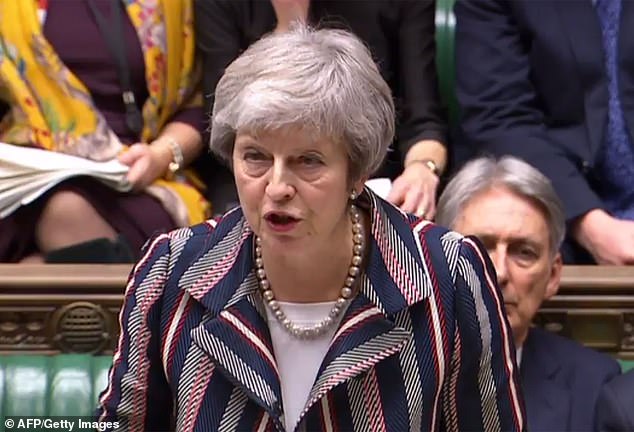 He added: ‘Customs union until new arrangements have been agreed to the satisfaction of UK, Republic of Ireland and EU. Anybody’s guess how long that will take.’

DUP leader Arlene Foster hinted yesterday she could back a ‘plan B’ Brexit if Ms May’s deal is destroyed in the Commons.

Mrs Foster told the BBC’s Andrew Marr she would consider any plan that did not separate Northern Ireland from the mainland UK.

She insisted the deal negotiated by Mrs May in Brussels, endorsed by EU leaders at an historic summit this morning, clearly breached the red line.

Mrs Foster told Marr: ‘I believe we should use the time now to look for a third way, a different way, a better way.’