A Tory MP who beat ex-Cabinet minister Chris Grayling to the chairmanship of the powerful Intelligence and Security Committee has been kicked out of the party for ‘working with Labour and the opposition.’

Dr Julian Lewis secured the role despite widespread expectation that Mr Grayling would receive the backing of the Conservative-dominated Intelligence and Security Committee.

In a move that caught Westminster by surprise tonight, the Tory leadership took disciplinary action against Dr Lewis as sources said the MP had ‘acted with the opposition for his own advantage’.

After the Tory whip was removed from Dr Lewis, a senior Government source said the removal of the whip was because the MP was ‘working with Labour and other opposition MPs for his own advantage’.

Prime Minister Boris Johnson was widely believed to want former transport secretary Mr Grayling to become the chairman of the body which oversees the work of MI5, MI6 and GCHQ.

It is thought Dr Lewis had only nominated himself for the role this afternoon after it became clear he would have the backing of all four Labour and SNP votes.

With the Conservatives enjoying a majority – with five out of nine places on the committee – there had been concern at Westminster that the Tory members would be ‘whipped’ to support Mr Grayling despite concerns about his expertise.

Former national security adviser Lord Ricketts warned that Mr Grayling – who earned the nickname ‘Failing Grayling’ during a chequered ministerial career – does not ‘match up’ to the authority and reputation of former chairs.

Following Dr Lewis’s success, Lord Ricketts said the body was now in the ‘hands of someone with much wider experience of defence and security’.

Mr Johnson has faced criticism over the delay in appointing the committee which has not met since the last parliament was dissolved in November last year. 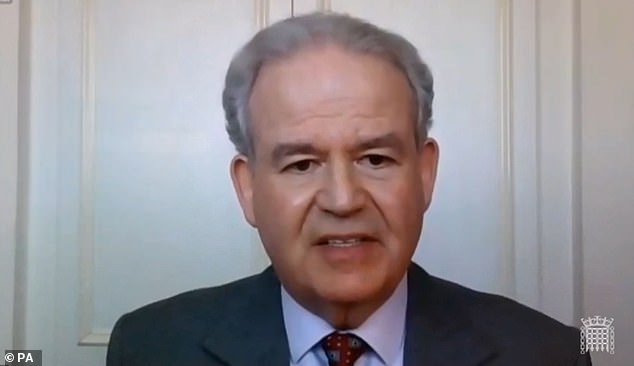 The committee has yet to publish its long-awaited report into Russian interference in UK politics after Mr Johnson refused to clear it for release before last year’s general election.

A committee source said: ‘This was a secret ballot but clearly for him (Mr Grayling) to lose, some Tories decided not to vote for him.’

Liberal Democrat foreign affairs spokesman Alistair Carmichael said Mr Johnson had appointed ‘yes men’ to the ISC but ‘true to form, however, failing Grayling has been undone in his bid to be chair’.

‘I hope we now have a committee with real teeth that can hold this Government to account,’ he added.

‘That starts by publishing the report into Russian interference of our democracy before the summer recess so MPs can scrutinise it fully.’

Mr Grayling had nominated himself yesterday and was said to not be expecting a challenge.

The former Cabinet minister had been widely expected to win the role after it became clear that he was Number 10’s preferred candidate.

A parliamentary source told Sky News: ‘Someone lays out a red carpet for you and you manage somehow to trip over it and set it on fire.’

The ISC, which is tasked with scrutinising the work of the UK’s intelligence services, has not been convened since December 2019 after it was dissolved for the general election.

It elected its members from across the House of Commons and the Lords earlier this week.

Now that it has a chairman it will be under pressure to quickly publish a long-awaited report into Russian interference in UK democracy.

The Lib Dems foreign affairs spokesman Alistair Carmichael said: ‘With the ongoing pandemic, people are rightly worried. That is why it is more important than ever before that people can have faith in Government.

‘Sadly, we have seen Boris Johnson drive a coach and horses through public trust by appointing yes-men to the intelligence committee. True to form, however, failing Grayling has been undone in his bid to be Chair.

‘I hope we now have a committee with real teeth that can hold this Government to account. That starts by publishing the report into Russian interference of our democracy before the summer recess so MPs can scrutinise it fully.’