The wife of Tory MP Owen Paterson has been found dead at home on her husband’s 64th birthday, it was revealed today.

In a statement, Mr Paterson, a former cabinet minister under David Cameron and Conservative MP for North Shropshire, said the loss of his wife, Rose, also 63, had come as a ‘terrible shock’ to the family.

Mrs Paterson, the daughter of the fourth Viscount Ridley, was the chairman of Aintree Racecourse and a Jockey Club board member. The couple married in 1980 and had two sons and a daughter.

Her death came as she became embroiled in planning row alongside housing secretary Robert Jenrick, who has called in an application by the Jockey Club for 300-plus homes and a hotel at Sandown Park, which was unanimously rejected by Surrey councillors last year

Mr Paterson said today: ‘It is with great sadness that I must inform you that my wife, Rose, has been found dead at our family home in Shropshire.

‘Rose and I were married for 40 happy years. She was a wonderful, caring wife, mother and grandmother. Her death has come as a terrible shock to us all’.

It is not known how Mrs Paterson died – MailOnline have contacted police for a comment.

The wife of Tory MP Owen Paterson, Rose Paterson, pictured together in 2011, has been found dead at home 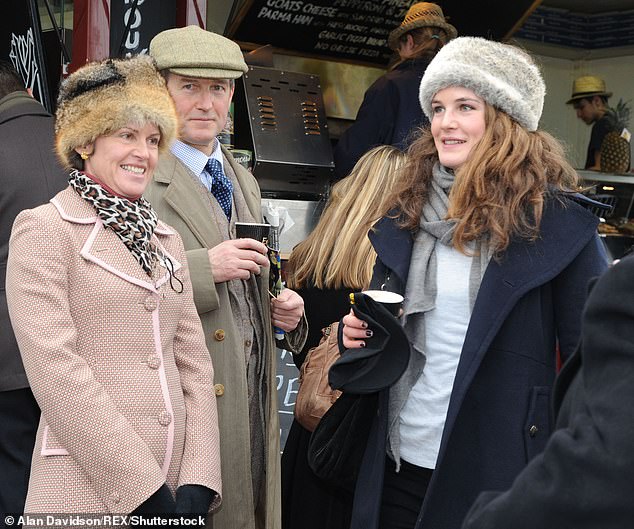 Mr and Mrs Paterson have three children, a daughter Evie, right with her parents, and two sons

Rose was appointed Chairman of Aintree in 2014, having been a Racecourse Committee Director at the famous home of the Randox Health Grand National since 2005. She was appointed a Steward of The Jockey Club in 2019.

Paying tribute, Sandy Dudgeon, Senior Steward of The Jockey Club, said: ‘This is tragic news and our thoughts go out to Rose’s husband Owen and all members of her family.

‘Rose was a wonderful person and involved in so many aspects of our sport. She was a skilled Chairman at Aintree, a valued member of our Board of Stewards and headed up our Horse Welfare Group. She also enjoyed participating at grassroots level over many years.

‘We appreciated her contribution very much and my fellow Stewards and I looked forward to hearing her sound views on a subject, where she was always sensitive to the best course of action for racing. She will be missed greatly for the person she was.’

Mrs Paterson was in the news this week after Housing Minister Robert Jenrick was facing questions over a second planning row, involving the Jockey Club, which she is on the board of.

Mr Jenrick has called in an application for it to build 318 homes and a hotel at Sandown Park in Esher, Surrey. The intervention has raised concerns about conflicts of interest because of the Jockey Club’s links to senior Conservative figures and donors.

Its board includes Tory peer Baroness Harding, who oversees the Government’s coronavirus test and trace programme, Rose Paterson, and Peter Stanley, who last year donated £5,000 to Health Secretary Matt Hancock’s constituency office in Newmarket, where the Jockey Club is based.

The Ministry of Housing, Communities and Local Government has insisted that ‘each planning appeal is taken on its own merits’.