Tory MP reveals how colleague told her to leave the party

A Conservative Party MP who backed Rory Stewart in the contest to replace Theresa May has revealed how she was told to ‘leave the party’ by one of her colleagues.

Antoinette Sandbach, who represents Eddisbury in Cheshire, posted a screen grab from WhatsApp which she claimed was sent by a male Tory MP, calling her a ‘disgrace’.

She said she was travelling on the train when she received the messages.

According to Ms Sandbach: ‘Barely is the ink dry on the results and the dark ops begin. This from a male conservative MP to me as I sit on the train home.’

Conservative MP Antoinette Sandbach has tonight accused a fellow Tory MP of urging her to quit the party, branding her ‘a disgrace’. Ms Sandbach publicly supported Rory Stewart for the leadership

Referencing the defection of former Tory MPs Heidi Allen, Anna Soubry and Sarah Wollaston, she continued: ‘It’s bad enough when you get it from complete strangers. Is it any wonder three female MPs left.’

Ms Sandbach posted a grab of two messages. One which arrived at 7.51pm which claimed ‘You too are a disgrace’. A second which arrived a minute later said ‘time you left the party I think’.

Ms Sandbach did not name the male MP who sent her the messages although she indicated on Twitter she would be reporting the matter.

Tory leadership hopeful Jeremy Hunt said the message sent to Ms Sandbach was ‘so wrong’ and called for unity in the Conservative Party. 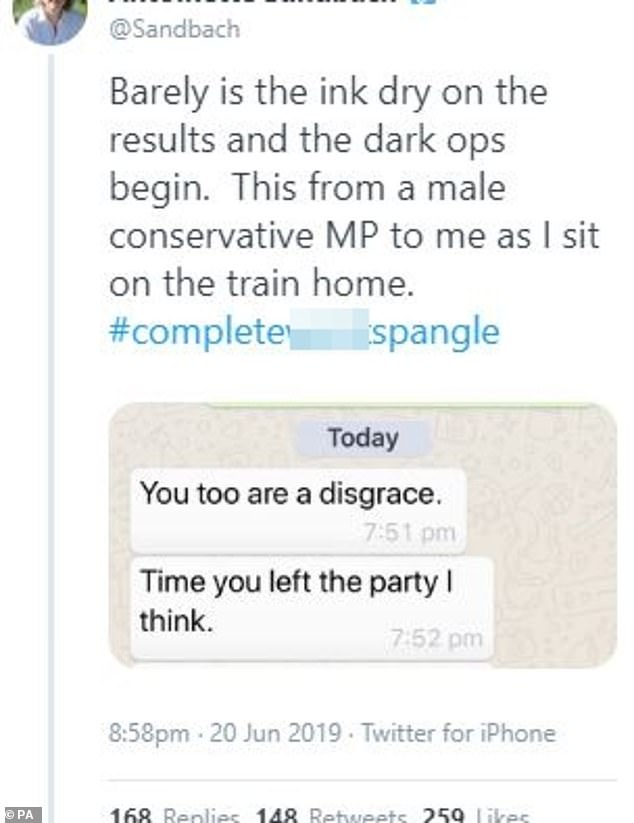 He tweeted: ‘This is so wrong! We have to come together as a party…’

MailOnline contacted the Conservative Party who said they have no comment to make on the allegations.