A Tory MP’s general election expenses form was forged, a handwriting expert has told the court.

Craig Mackinlay, 52, is on trial alongside staff accused of overspending in his successful bid to beat the then UKIP leader Nigel Farage to the seat of South Thanet, Kent, in 2015.

The declaration submitted to authorities for the ‘long campaign’ period of the run-up to the election was likely a forgery, Southwark Crown Court was told on Monday.

As election agent, Gray was to produce and sign the declaration and, to the untrained eye, his signature appeared on it.

But Oliver Thorne, a forensic scientist specialising in handwriting, said this was an ‘imitation’ and that there were also ‘significant differences’ to show the writing on the form was forged too.

‘There’s strong support someone other than Nathan Gray both wrote and signed that form,’ he said.

The culprit is not likely to be Little or Mackinlay, he added.

Trevor Burke QC, defending Gray, questioned whether he would have been able to ‘crack this case’ if he was provided with examples of writing from the forger.

Mr Thorne said he could, and perhaps in the space of a ‘couple of hours’.

Mackinlay, an accountant by profession, was elected to Parliament on May 7 2015 with a majority of around 2,800 from an electorate of 70,000.

Declared spending came in under the strict £52,000 limit. 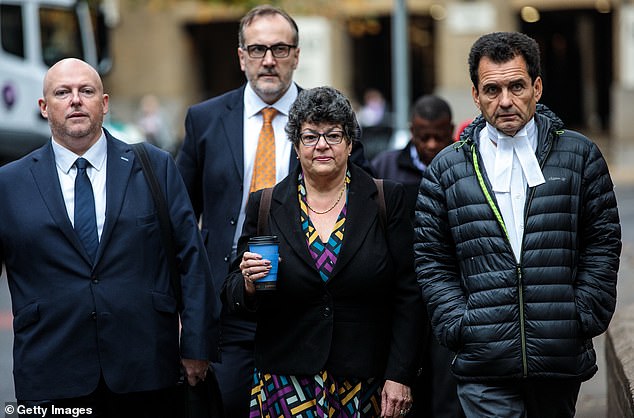 But jurors have been told his victory could have been made void if up to £66,000 of undeclared spending on staffing, accommodation and advertising was included on returns.

Mackinlay, from Ramsgate, Kent, denies two charges of making a false election expenses declaration under the Representation of the People Act 1983.

Gray, of Hawkhurst, Kent, denies one charge of making a false election expenses declaration and a further charge of using a false instrument under the Forgery and Counterfeiting Act 1981.

Little, of Ware, Hertfordshire, denies three counts of intentionally encouraging or assisting an offence under the Serious Crime Act 2007.

The defendants are all on bail while the trial, expected to last until December, continues.