George Osborne faced growing Tory dissent over his cuts to disability benefit today as a letter circulated urging him to change course.

In an echo of the damaging row over tax credits last year, Brigg and Goole MP Andrew Percy said higher petrol duty would have been a price worth paying to protect vulnerable people.

And the chief executive of the MS Society warned today that people suffering from the chronic disease could lose up to £150 a week from the latest cuts.

The Chancellor confirmed the cuts in yesterday’s benefit and today insisted it was to ensure the disability budget was spent helping the most needy.

No 10 today pointed to a study which showed 96 per cent of disabled people who need support would be better served by one off payments instead of a weekly allowance.

Tory MP Andrew Percy today signalled at Tory unease over the cuts as he suggested a rise in fuel duty would have been a price worth paying to protect the disability element in the personal independence payments (PIP).

He said: ‘If I can be honest, I’d rather have a penny or two on fuel if it protects PIP. A point a made in weeks running up to budget.

‘The reason I say that is because I do feel if opposing something, we should also identify where else it could be funded from.’

Another Tory MP, Johnny Mercer, also voiced concerns over the latest cuts to disability benefits, taking to Twitter to say: ‘We must look after our most vulnerable at every turn.

‘No doubt welfare spend still too high, but for those who really need it,it is lifeline.’

‘I think it sends out the wrong message about the priorities of the Government.’

Tory MP Andrew Percy today signalled at the unease on the Tory benches about the cuts to disability benefits, tweeting an increase in fuel duty would have been a price worth paying

Mr Percy continued: ‘There are some changes within the whole package that you can argue that about, but the fact is the package as a whole goes too far.

‘I think the savings that it makes are not appropriate and I don’t think can be justified so it’s just not acceptable now.’

Speaking in the House of Lords today, Michelle Mitchell, chief executive of the MS Society, said: ‘The changes to personal independence payments will reduce weekly support for some people by over £50 a week.

‘In the very worst cases, we estimate people with MS could lose up to £150 a week – to say these are ‘not cuts’ is beyond belief.

‘These changes will have a very real and damaging impact on the lives of the disabled people affected.’

He said: ‘The truth is the Tories have targeted thirty billion pounds worth of cuts on disabled people since 2010.

‘These latest cuts, hitting those who need help managing toilet needs and getting dressed, are beyond cruel’.

Asked on BBC Breakfast about whether cuts to PIP were harming the most vulnerable in society, Mr Osborne said: ‘We have got to make sure we have a system that works.

‘I’m always happy to listen to proposals about how improve on that but we have got to control our disability budget and make sure help goes to the people who need it most.’ 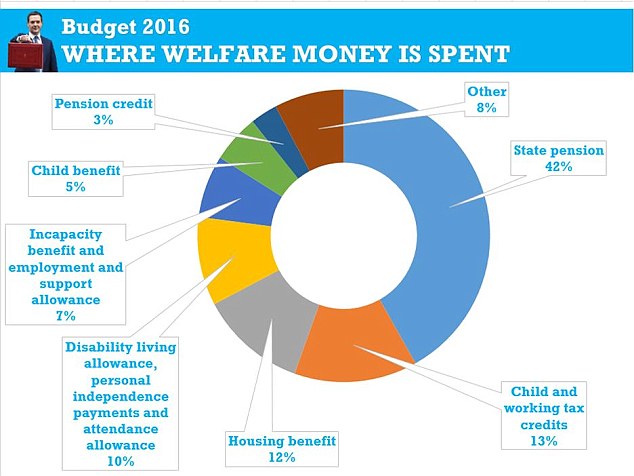 George Osborne announced that the Disability Living Allowance, part of the section marked yellow, will be cut by £1.2billion. The state pension accounts for by far the largest slice of the welfare budget, worth more than 40 per cent of the budget this year, but is protected from cuts. Source: IFS pre-election analysis

He added: ‘We’ve got to make sure we control our disability budget so that as it rises – and I stress this point – as it rises it absolutely goes to the people in our society who need it most.’

The Prime Minister’s official spokeswoman added: ‘The Government are clear on why we are proposing these changes.

‘Spending on main disability benefits has gone up and we don’t think the personal independence payment is working as well as it could at making sure the money that is going into this is being focused on the right people.’

She added: ‘Health professionals were asked to review cases where people qualified for personal independence payments based on the need for aid and applicances for their disability.

‘What they found was in 96% of cases they were unlikely to have ongoing extra costs – so for example they might have needed to have a hand toilet rail fitted in their home.

‘Once that was completed they were unlikely to need significant extra costs over a sustained period that would justify a weekly allowance.’