Tory MPs tell Theresa May not to water down Brexit

By Jason Groves, Mario Ledwith And Claire Ellicott For The Daily Mail

Sixty-two Tory MPs have written to the Prime Minister, warning her not to water down Brexit.

Details of the letter emerged last night as senior ministers prepared to hold eight hours of talks at Chequers in a bid to thrash out an agreement on the Government’s demands to Brussels.

Theresa May has summoned members of her Brexit ‘war cabinet’ to her country retreat in a bid to resolve tensions over Britain’s future relationship with the EU.

The letter from the European Research Group, led by Jacob Rees-Mogg, made clear that Eurosceptics will not tolerate any backsliding. It warns Mrs May it is vital she secures ‘full regulatory autonomy’ as part of any divorce deal, leaving Britain free to set its own laws without Brussels interference.

They warned the UK will be ‘legally barred’ from striking free trade deals if it remains in the single market or customs union.

The letter, co-ordinated by former minister John Penrose, continued: ‘Leaving them both isn’t a question of ideology but practicality – we can’t strike those free trade deals if we don’t.’

The MPs also warn that the UK must be free to start trade negotiations with other countries at once. The move comes amid German claims that Boris Johnson privately described Brexit as ‘a mess’.

The Foreign Secretary allegedly aired his personal concerns about the UK’s negotiating position in the hope of encouraging Germany to take a softer approach.

German government sources said he had appealed to senior figures in Angela Merkel’s administration to help ‘make a win-win out of this mess’.

One senior Tory last night accused Berlin of ‘mischief-making’ in a bid to undermine Mr Johnson. 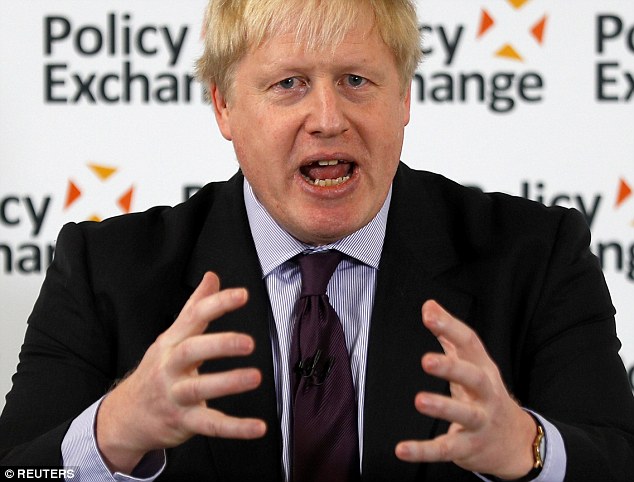 A friend of the Foreign Secretary said: ‘These old claims will be rightly dismissed as nonsense by anyone sensible. Boris knows Brexit will be a great success and is committed to taking back control of our money, laws and borders.’ But the claim is potentially embarrassing for Mr Johnson, coming just days after he set out an upbeat vision for the Brexit divorce.

The meeting is designed to agree the basis of the Government’s negotiating position as ministers prepare for the start of talks on a future EU trade deal next month.