A source in the ERG group of Tory Brexiteers has promised ‘guerrilla warfare’ against the Prime Minister despite her having won a confidence vote. Prominent ERG member Jacob Rees-Mogg (pictured) said it was a ‘terrible result’ for the PM

Tory Brexiteers have pledged to wage ‘guerrilla warfare’ against the Prime Minister despite having failed in their attempt to unseat her with a vote of no confidence.

One MP said the Mrs May had been badly wounded and would ‘bleed out slowly’ while Cleethorpes Martin Vickers called her a lame duck.

Jacob Rees-Mogg claimed the 200-117 outcome in favour of Mrs May was a ‘terrible result for the Prime Minister’ and that the ‘overwhelming majority of her backbenchers have voted against her’.

Mr Rees-Mogg said: ‘Of course I accept this result, but Theresa May must realise that under all constitutional norms she ought to go and see the Queen urgently and resign.

‘She doesn’t have the confidence of the House of Commons and should make way for someone who does.’

He argued the ‘payroll vote’ – of MPs whose jobs depend on the patronage of the Prime Minister – was around half the Party and that the result showed as many as three quarters of backbenchers oppose Mrs May and her Withdrawal Agreement.

It followed an ill-tempered day in which MPs on both sides made public statements which risk widening further the seemingly-irreconcilable gulf between the two wings of the Conservative Party.

Remainer Philip Hammond, the Chancellor of the Exchequer, said the vote was a perfect opportunity to ‘flush out the extremists’ in party – which prompted a backlash from Leavers so severe that Mrs May was forced to tell a 5pm crunch meeting: ‘There are no extremists in this party’.

Richard Harrington, the Europhile industry minister, said that hardliners would be ‘shown up for what they were: a minority of a minority. They are like student union kids.’ 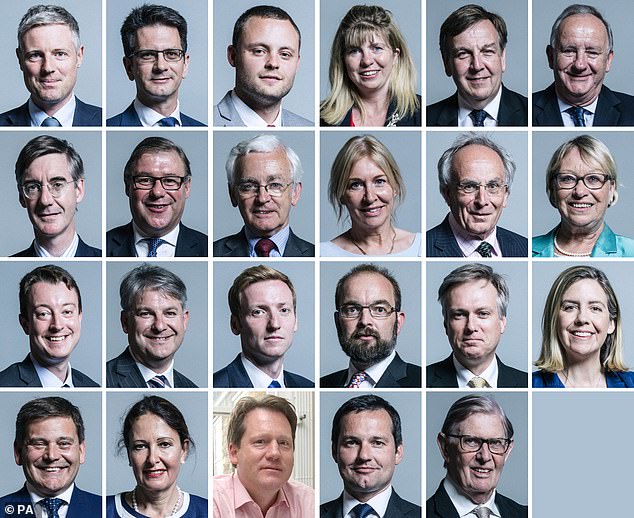 A source in the European Research Group (ERG) of Tory hardline Brexiteers told the Daily Mail their implacable opposition to the Withdrawal Agreement would go on.

‘The campaign of guerrilla warfare will continue,’ he said.

‘Why on earth does anyone think anyone opposed to the Withdrawal Agreement would drop their fight should May be confirmed in place as leader?’

May’s backers hit back at the rebels, with Work and Penions Secretary Amber Rudd, saying Eurosceptics in her party were ‘always going to be very difficult to please’ and Remain-backing Tory MP Anna Soubry describing the ERG as ‘a rump of hard right, hard Brexiteers’ who ‘should have been booted out by previous leaders.’

It came after Theresa May escaped the attempt to oust her from No 10 tonight as the Brexiteer plotters bungled their best chance to remove her.

The Prime Minister was forced to pledge to her MPs she would quit before the 2022 election – and was slammed by critics in a packed Commons committee room.

But amid the high drama of the confidence vote receiving only 117 votes against her buys Mrs May a year of relative safety at a crucial point of Brexit. Tory rules prevent another vote by Conservative MPs for 12 months.

Tonight’s vote leaves the Prime Minister free to travel to Brussels tomorrow for the EU summit as she continues her scramble to shore up the divorce deal.

The failure to remove Mrs May or make her position as PM untenable is a second embarrassing blow for the Brexiteer European Research Group (ERG) since Mrs May’s divorce deal was first unveiled in mid November.

Sources close to the group insisted it was a ‘good result’ and vowed to fight on for Brexit – but they also know they have used their one shot at ousting Mrs May. 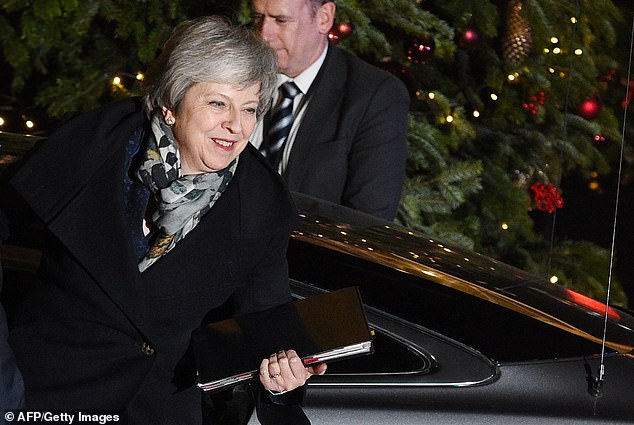 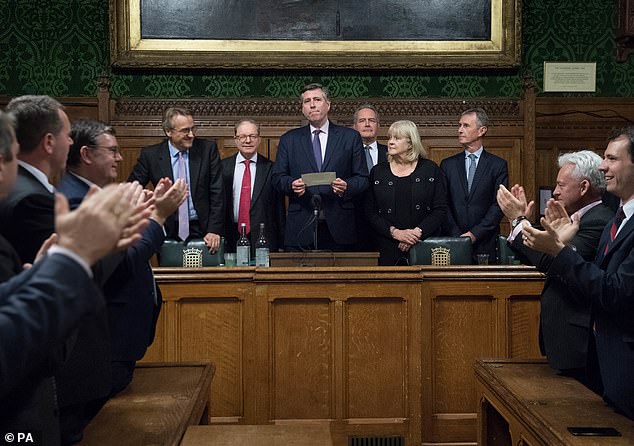 Jacob Rees-Mogg announced the first push to remove Mrs May on November 15, holding a press conference on the steps of Parliament calling for letters of no confidence.

How the Brexiteer coup emerged – and how it collapsed

Theresa May has been dogged by rumours of a coup by angry Brexiteers since the snap election surrendered the Tory majority – but the plot exploded when her deal emerged.

November 13: A draft deal is struck in Brussels and begins to leak. Brexiteers react with horror at the state of the Irish border backstop.

November 14: May secures agreement for the deal after a marathon and fractious Cabinet meeting.

November 15: Dominic Raab and Esther McVey resign from Cabinet over the deal, branding it a surrender to Brussels.

Jacob Rees-Mogg goes public with a move against May, calling on Tory MPs to submit letters of No Confidence.

Brexiteer plotters insist they still want to remove the PM but admit they do not have the necessary 48 letters.

November 25: At a special EU summit, the divorce deal is rubber stamped.

December 4: May opens a five day debate on her Brexit deal ahead of a planned vote. Opposition is mounting rapidly, with dozens of Tory MPs pledged against it.

Tory MPs rebel to help Labour hold the Government in contempt of Parliament amid three humiliating Commons defeats for May in 63 minutes.

December 10: May calls off the vote, admitting there is ‘significant’ opposition to the deal.

December 11: Rumours spread rapidly that letters of no confidence are finally mounting up as MPs lose patience with May’s insistence she can salvage her deal.

December 12: A vote of no confidence is finally called  – and is held within hours as May vows to fight on.

Support for the Brexiteers falls flat, leaving May safe from party procedure for a year and free to keep shoring up her deal despite rage in her party.

When the 48 letters failed to emerge, the Brexiteer ring leader confessed the plotters were something of a ‘Dad’s Army’ – even admitting to his admiration for Captain Mainwaring, the hapless officer from the BBC sitcom.

Sources did say despite the ‘stuttering’ effort to call the confidence vote in the first place, the move by scores of MPs against the Prime Minister once they did would be enough to stop her delivering a ‘Brexit In Name Only’.

There was frustration among Eurosceptics tonight’s ballot was called so quickly – with many expecting the vote to have been held as late as Monday to give critics more time to mobilise.

Instead, the Government was able to put on a huge show of force after Mrs May addressed the nation in Downing Street this morning.

Tory ministers and loyalists dominated the airwaves all day – with backbencher Simon Hoare making amid the most lurid claims that the rebels ‘may have forgotten to take their meds’ and branding the ringleaders the ‘three stooges’.

By the time Mrs May arrived to address the 1922 Committee at 5.06pm, the whips had organised a noisy round of desk banging to welcome her to a packed Committee Room 14.

Former Brexit Secretary David Davis left at 5.20pm declaring the PM to have made a ‘good speech’.

The Prime Minister was said by some observers to have ‘lost the room’ when Cornish MP Steve Double demanded she explain what she might have done differently since entering Downing Street.

Another critic, Lee Rowley, warned Mrs May that ‘stamina is not a strategy’ while Adam Holloway demanded more detail on exactly when she would go.

But an emotional PM left Home Office Minister Victoria Atkins with tears in her eyes as she said she would not lead the Tories into the next election.

She told her party: ‘In my heart I would have loved to have led us into the next election, but I realise that we will need a new leader with new objectives for the 2022 election.’ 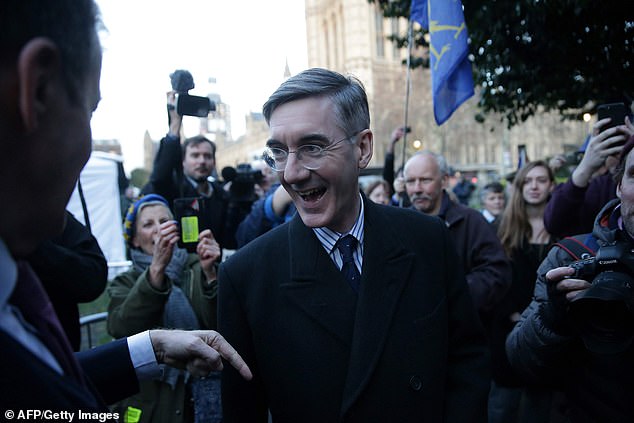 Jacob Rees-Mogg announced the first push to remove Mrs May on November 15, holding a press conference on the steps of Parliament calling for letters of no confidence 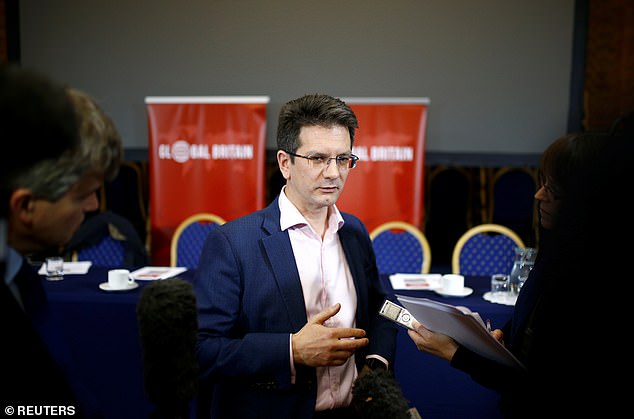 Sources said the ‘stuttering’ effort to call the confidence vote in the first place, despite pleas by ringleader Steve Baker (pictured last month), the vote against Mrs May should kill off a ‘Brexit in Name Only’

The promise was not enough for some – with Mr Rees-Mogg dismissing Mrs May’s intentions as a ‘politician’s answer.

But after the meeting Work and Pensions Secretary Amber Rudd insisted she gave the assurances that MPs wanted when ‘she was very clear that she won’t be taking the general election in 2022’.

Bizarrely the loudest support on the night was for Charlie Elphicke and Andrew Griffiths, two suspended MPs returned to the Tory whip just hours before the vote.

Tory MPs queued up to cast their ballots – on embossed 1922 Committee stationery – and were even asked to show photo ID before placing them in one of three ballot boxes.

The votes were counted by Sir Graham Brady and his two vice-chairmen of the 1922 Committee, Dame Cheryl Gillan and Charles Walker.

Sir Graham read out the result live from Committee Room 14, sealing Mrs May’s immediate future by declaring: ‘The parliamentary party does have confidence in Theresa May.’ 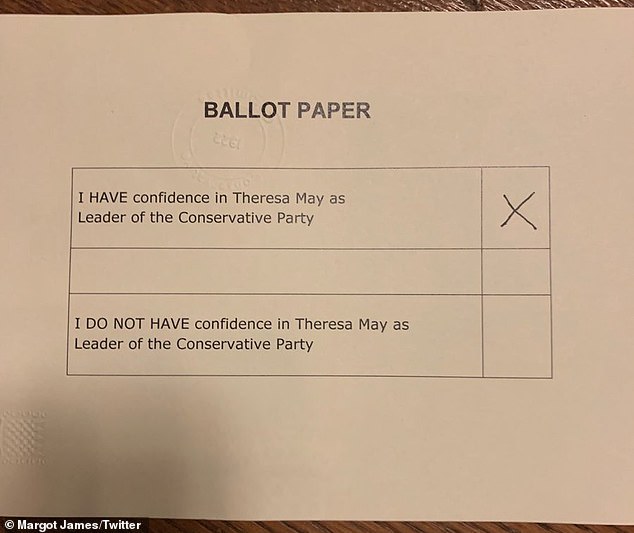 The votes were counted by Sir Graham Brady and his two vice-chairmen of the 1922 Committee, Dame Cheryl Gillan and Charles Walker (pictured is the ballot of Margot James’s vote for the PM)

The office of Tory leader Iain Duncan Smith was used for a meeting by some of the rebels ahead of the vote, City AM revealed.

Mr Duncan Smith has repeatedly insisted he would not personally send a letter of no confidence in the PM after his own party leadership was terminated by the process in 2003.

Others present included Sir Bernard Jenkin – among those to have publicly confirmed he voted against Mrs May – and other Brexiteers Simon Clarke, Anne-Marie Trevelyan and Steve Baker. 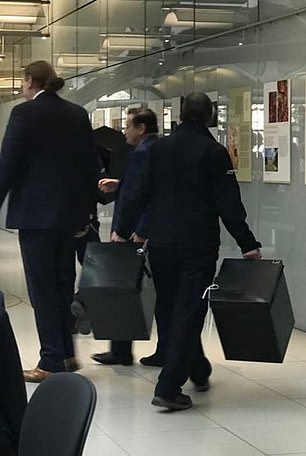 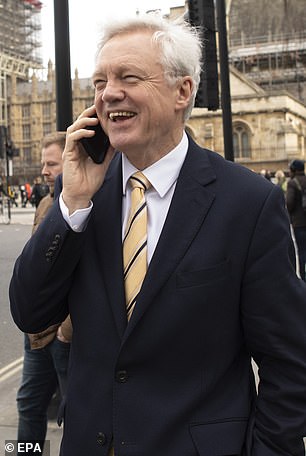 The ballot boxes used in last night’s secret ballot of Conservative MPs (pictured left). David Davis (right), one of three men to serve as Brexit Secretary since July, hinted he might vote against Mrs May

One Brexiteer MP predicted to MailOnline at lunchtime the rebels would secure around 100 votes – a figure critics had hoped would have been enough to dislodge her.

Sources did say despite the ‘stuttering’ effort to call the confidence vote in the first place, the move by scores of MPs against the Prime Minister must be enough to stop a ‘Brexit In Name Only’.

The ERG also believes it retains the strong support of the DUP – claiming Mrs May had alienated the Northern Irish party further by promising her MPs she had given reassurances to the Unionist group.

But one rebel admitted the coup had failed and warned: ‘We’re going to be back here in a month when the Brexit deal fails, but without any mechanism to get rid of her.’