A Tory rising star has said it would be ‘great’ to be Prime Minister and lashed ‘noisy’ Boris Johnson for telling jokes that undermine him as a ‘serious’ Foreign Secretary.

Tom Tugendhat, the chairman of the Foreign Affairs Committee, is touted as a future star of the Conservative Party. He beat party veteran Crispin Blunt to the position in a post-election contest.

The Tonbrdge and Malling MP told The House magazine he would serve at whatever level he was asked to – including the top job.

Mr Tugendhat, the son of High Court Judge Sir Michael Tugendhat, enjoyed a 10-year career in the Army before entering politics, rising to be a Lieutenant Colonel.

Asked if he would repeat comments saying he wanted to be Prime Minister, the Tonbridge MP said: ‘What I meant by that is I got into politics to serve.

‘And it’s a huge privilege to be serving, because parliament has asked me to chair the Foreign Affairs Committee. That’s absolutely my focus, for the next few years anyway.

‘But I will serve wherever it is. And would it be great to be PM? Yep, it would be.’

He added: ‘Would it be great to be a minister of any kind? Yes, because all of those opportunities to serve are very much winning a lottery in what is frankly a fantastic opportunity to serve our country in a different way.’

In what is likely to be seen as a warning to Foreign Secretary Boris Johnson, Mr Tugendhat said humour did not translate internationally. 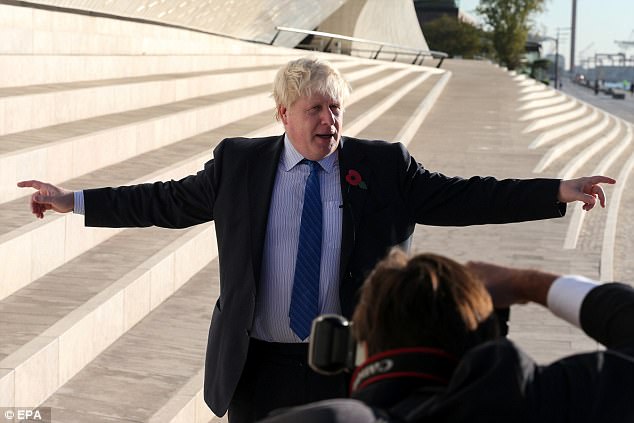 In what is likely to be seen as a warning to Foreign Secretary Boris Johnson (pictured today in Lisbon), Mr Tugendhat said humour did not translate internationally

Referring to Mr Johnson, the Tory MP said: ‘He’s certainly got a lot of passion for the United Kingdom and has a way of expressing himself which certainly carries a lot of noise.

‘There are many people who don’t understand quite how difficult it is to translate humour, because humour is fundamentally cultural. It is really, really hard to do cross-cultural humour.

‘I think there are ways of doing diplomacy.

‘I’ve done it in Afghanistan, in Iraq and Saudi (Arabia) and across parts of Africa and most of the Middle East, and I just think that it’s very, very hard to make humour work in international environments, which is why very few serious politicians try it.’