A teenage Conservative faced horrendous online abuse after her parents gave her a Brexit cake for her 18th birthday.

Poppy Millward was sent dozens of abusive messages for uploading a picture of herself with the cake, which features an edible Boris Johnson and the slogan ‘Let’s get Brexit done’.

The A-Level politics student, from Buckley, Flintshire, was so upset by trolls she claims she had to take days off college.

The politics student is a staunch Conservative Party and Brexit backer, despite being too young to vote in the 2016 referendum and living in a traditionally Labour-supporting area of Wales.

Poppy Millward, 18, of Flintshire, Wales was sent dozens of abusive messages for uploading a picture of herself with her birthday cake, which features an edible Boris Johnson and the slogan ‘Let’s get Brexit done’

She posted a picture of her and the cake on her Snapchat story on January 10.

But it was later re-uploaded by her classmates and posted on Twitter, triggering floods of hateful messages and adding to her anxiety.

@FarisSaifelden shared the image of the cake with the caption: ‘F*** right off as if a Tory has actually got this cake for their 18th. 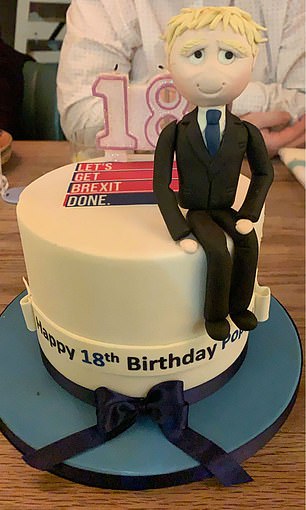 ‘Needs a wee kerb-stomping if you ask me.’

Lewis Keegan added: ‘That’s taking it too far, sort it out inbred.’

@lunaline wrote: ‘Literally couldn’t think of anything more depressing than receiving this vile piece of s*** (no offence to the cake makers).’

Gary Burgess said: ‘What a sad state of the UK when this is the sort of thing the young C***-servatives are asking for in their birthday cakes.’

Megan Rose-Taylor posted: ‘The screenshots have a point, you are an inbred.’

And Conor Adams commented: ‘I like how you make Boris skinny. Blatantly lying to look good does fit well with the Tory theme.’

But some people rushed to Poppy’s defence.

Tom Bowell replied: ‘I’m a proud Labour member and strongly dislike the Tories for their disastrous record in government but this tweet is rather mean.

‘It does nothing for our movement and is just plain nastiness for the sake of it.

‘Grow up and cut it out man, let’s focus on the important things to criticise!’

The A-Level student, from Buckley, Flintshire, was so upset by trolls she claims she had to take days off college

A distraught Poppy posted an emotional status the next day calling out the abuse.

She wrote: ‘That’s it, I’m name calling. This is disgusting. The birthday cake was a surprise off my parents because it’s my hobby and subject choice and I was really happy with it.

‘Why is it funny to make fun of someone’s 18th birthday cake and ruin their happiness about it because of your political opinion?

‘This isn’t a ‘oh just ignore them thing’, this is the stuff that solidifies anxiety I have and makes me think about for weeks.

‘This is the stuff that makes me scared to go outside and it’s not me being over-dramatic.

There were some who rushed to her defence online, including a local Labour member

‘This will lead to me being scared to be happy and believe what I want to believe.

‘I literally feel so ruined and i’m not going to not share this because it’s not something I can ignore.

‘It was my 18th birthday, and it made me happy. Sorry you feel the need to make fun.’

Speaking today, she added: ‘It started with me just posting the cake and getting 30 screenshots on my snapchat, but that didn’t bother me because obviously my area is a Labour area.

‘Then I came home from work and saw the tweets trying to publicly embarrass me, saying I should be ‘curb stomped’ and I’m ‘inbred’.

‘I made the status to effectively do what they did to me – call them out. The only difference was that they were the ones who had done something wrong.

‘I suffer from anxiety as mentioned, and it lead me unable to go to sixth form for a few days following it.

‘Now every time I’m there I usually have my coat up and sit away from public areas.

‘I was really nervous to be in public for a while and it felt like everyone’s eyes were on me.’ 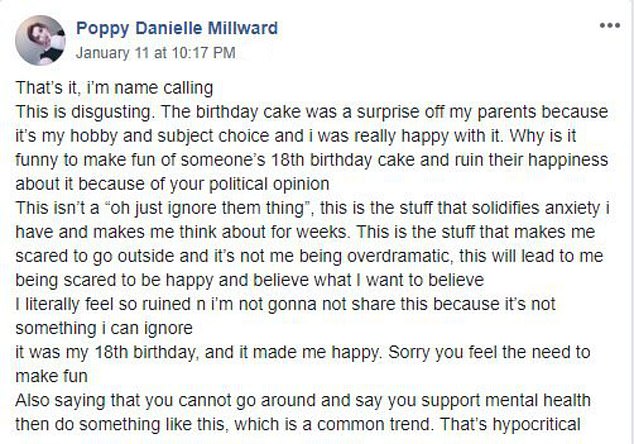 Poppy, 18, hit out at trolls the day after she uploaded the picture to her Snapchat story