Official statistics published by the Department for Transport this week confirmed a significant decline in deaths on Britain’s roads last year during a Covid-hit 12 months – but there was a massive 41 per cent jump in cyclist fatalities despite the huge drop in motor vehicle use.

Government records show there were an estimated 1,460 road deaths in 2020, which includes a total of four months of national lockdown.

But while deaths of people travelling by car fell from 736 to 618, cases of cyclists being killed increased from 100 to 141 as more people got on their bikes to avoid public transport when the pandemic took hold.

The numbers show that around 23,529 people were killed or seriously injured on Britain’s roads last year – a year-on-year decline of 22 per cent – and there were 115,584 casualties of all severities on our roads in 2020, down by a quarter on 2019.

Commenting on the figures, Edmund King, AA president, said it is clear that lockdown travel restrictions during the pandemic helped the year-on-year fall in casualties and warned that the shrinking death figures for 2020 should not be accepted as an achieved improvement in road safety.

‘Rather than simply accepting this as a dip in the records, we should use this moment as the catalyst to reset ‘zero’ road deaths as the target for the end of the decade,’ he said.

The most alarming stats from the published figures was the rise in cyclist casualties despite there being far fewer motors on the road.

Not only were deaths two fifths higher than in 2019, they were 27 per cent up when compared to a decade before. 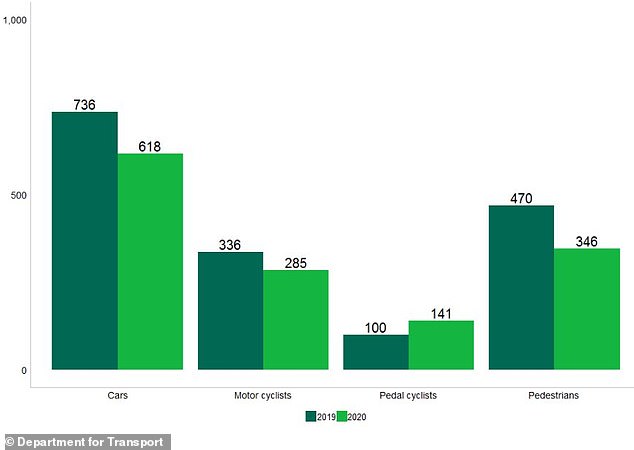 DfT said it was due to a 46 per cent increase in cyclist traffic last year with Britons clocking an estimated 5.03 billion miles on their bikes in 2020 – up from 3.45 billion in 2019 – as bicycle use soared during the pandemic.

In comparison, all motor vehicle traffic combined decreased by 21 per cent last year as a result of national lockdowns, the records show.

This tallies with official stats from a year ago, which showed that in April 2020 traffic levels were down by more than 80 per cent across the country.

Yet while the figures might point towards an increase in cyclist fatalities due to the dramatic rise in people using bikes, all cyclist casualties – covering everything from deaths to minor injuries – fell year-on-year to 16,294, down from 16,884 in 2019.

It points to there being fewer accidents involving cyclists but a greater risk of loss of life. 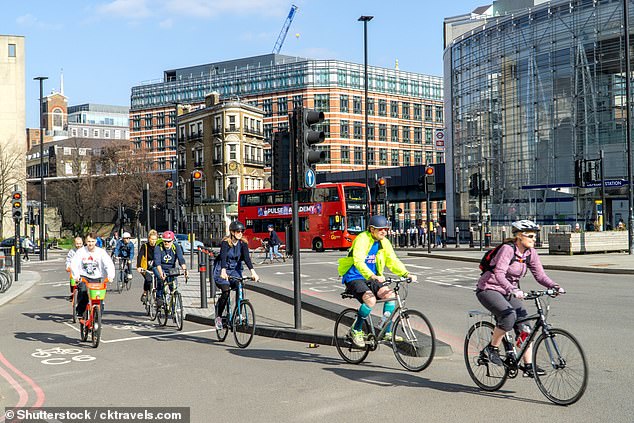 DfT said the spike in cyclist deaths was down to a 46% rise in bicycle miles last year. People in Briton pedalled 5.03 billion miles in 2020, up from 3.45 billion a year earlier

The Royal Society for the Prevention of Accidents (RoSPA) said it is ‘deeply concerned’ about increases in the number of fatal collisions involving cyclists.

David Walker, head of road and leisure safety at RoSPA said: ‘We welcome the fact that more people have been getting out on their bikes and recognise the reduction in the rate of deaths per mile travelled.

‘However, this should not distract from the shocking fact that more cyclists died on our roads than in the previous year.

Department for Transport figures show that these are the total cycling miles (in billions) covered in Britain each year since 2010 – and shows the dramatic increase in bicycle use last year:

‘At RoSPA we believe that having more cyclists and pedestrians should not result in an increased number of serious and fatal accidents involving vulnerable road users.

‘We must continue to act decisively if we want to maintain the position of British roads being among the safest in the world.’

Edmund King added: ‘While we don’t have the detail behind every single death, all drivers need to ensure they look for cyclists and ‘think bikes’, especially when turning at junctions and at roundabouts.

‘Potholed roads need to be restored to prevent cyclists coming off their bikes or swerving into the path of vehicles.’

Cycling groups, however, said the figures raised ‘serious questions about the provision of safe routes for cycling’.

Keir Gallagher, Cycling UK’s campaigns manager, said he was concerned about the safety of cyclists in rural areas, especially direct routes into towns, which people are likely to rely on for commuting and other essential journeys.

‘It also raises questions about whether a default speed limit of 60mph on winding and often relatively narrow rural roads is appropriate,’ he said.

‘It’s clear from these figures that we urgently need more investment in safe space for cycling across the country, and rural communities must not be left behind.

‘Statisticians might expect this increase of cyclist casualties at the same time as more people took to their bikes during lockdown, but 141 deaths is still 141 tragedies that could have been avoided.

‘The DfT statistics also show that motor traffic was 21 per cent lower in 2020 than in 2019. With traffic now returning to pre-pandemic levels, the need for safe cycling space is even more urgent.’ 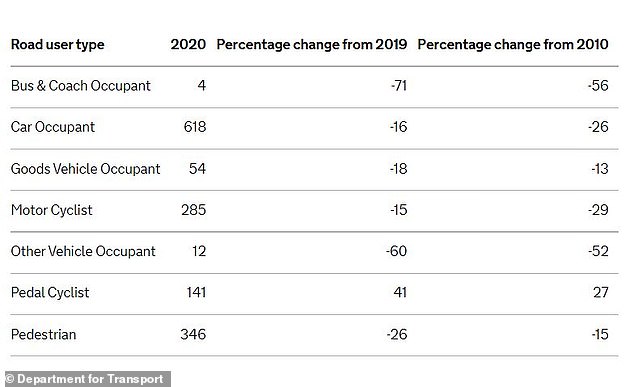 Deaths of cyclists were not only higher than 2019 but up by 27% on a decade ago, official figures suggest

That breaks down into 21 cyclists, 22 people in vehicles and 57 pedestrians, according to figures from the DfT.

A staggering 383 riders were themselves injured in accidents last year – and one was killed.

This year, another rider, Shakur Pinnock, 20, died in June six days after he was involved in a crash with a car in Wolverhampton.

And in July 2019, YouTube star and TV presenter Emily Hartridge, 35, died after she was struck by a lorry while riding an e-scooter at a roundabout in Battersea, south London.

Of the 57 pedestrians injured after being hit by e-scooters in Britain last year, thirteen of the casualties suffered injuries described as ‘serious’.

The majority of victims of e-scooter collisions were at least 40 years old, including nine in the 70 and above category.

Eight children under 10 were also injured.

Some older e-scooter riders were also among the casualties, including three aged 60 to 69 years and one who was at least 70. 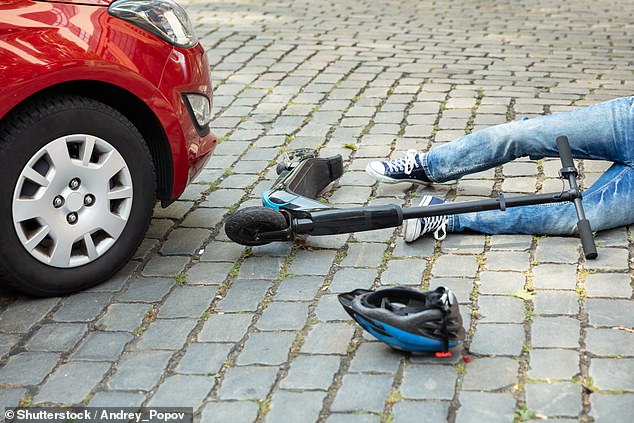 The DfT figures also confirmed that 57 pedestrians were injured after being hit by e-scooters in Britain last year, with thirteen of the casualties suffered injuries described as ‘serious’

The figures do not distinguish between incidents involving privately-owned e-scooters and rental e-scooters.

Private e-scooters which cannot legally be used in the UK except on private land, but are often used on roads and pavements.

Dozens of legalised e-scooter rental schemes have been launched in urban areas across Britain since July 2020 as part of Government trials, despite long-running safety concerns about the contraptions.

Charity Guide Dogs has called for the sale of private high-speed e-scooters to be banned, and expressed fears that their use means some people with sight loss are being forced to change their route or avoid independent travel altogether.

Drink driving on the rise in Scotland, government figures show

Driving under the influence (DUI) increased by a shocking 23 per cent compared with the previous year, according to the latest report from the Scottish government.

Recorded Crime in Scotland figures published this week show that 8,097 DUI offences were recorded by police in 2020/2021, up from 6,594 in the previous twelve months.

The figure is nine per cent higher than 10 years ago, despite increased awareness of the dangers of getting behind the wheel while intoxicated and Scotland having a stricter drink drive limit than the rest of the UK.

A recent poll of 2,000 drivers in in England, Scotland and Wales found that 39 per cent of Scots admitted their alcohol consumption increased during lockdown. 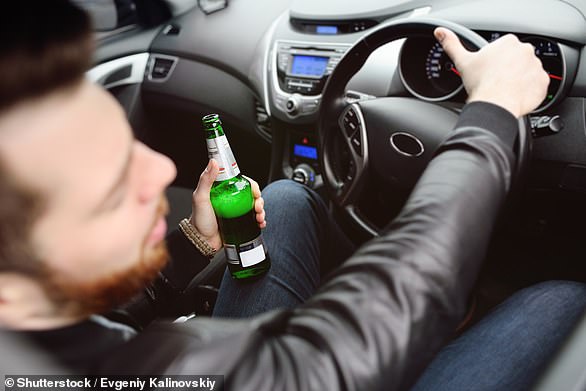 Figures published by the Scottish Government said there had been a 23% rise in drink driving in 2020/21 with a total of 8,097 DUI cases

‘With pubs and restaurants closed, people were drinking more at home and then finding themselves still over the limit the next morning,’ explained Hunter Abbott, MD at breathalyster firm AlcoSense.

‘If you drink four pints of medium-strong beer or four large glasses of wine, it can take as long as 14 hours for the alcohol to clear your system.’

The poll also found that a third of Scots (34 per cent) think their ability to drive is only impaired if they are over the legal drink drive limit.

But with just 10mg of alcohol in your blood (one fifth of the Scottish limit) you are 37 per cent more likely to be involved in a fatal crash, according to scientific research.

The Scottish drink drive limit was lowered in December 2014 from 80mg of alcohol in 100mL of blood to 50mg.

However, a recent study published in the Journal of Health Economics suggests there has been no change across all types of accidents involving alcohol following the introduction of the stricter limit.