Known as one of gaming’s most influential figures, TotalBiscuit announced in May 2018 that he would be retiring from game criticism.

John Bain was diagnosed with bowel cancer in 2014 and although the cancer went into remission, it later returned and spread to his liver and spine. But who was TotalBiscuit?

John Bain, otherwise known as TotalBiscuit lost his battle with bowel cancer and has died

John Bain was a YouTuber and PC computer game critic who went by the name TotalBiscuit and had more than 2 million subscribers on the video sharing website.

After being laid off from a financial advisory company, he started uploading videos which later catapulted him into online fame and was invited to other gaming networks, as well as partnering with Sony Entertainment.

Dubbing himself as ‘The Cynical Brit’, TotalBiscuit became a viral sensation after posting his hard-headed reviews of new indie games.

He was also a game curator on the platform for buying new games, known as Steam, and also hosted a gaming podcast.

TotalBiscuit won the Fan’s Choice accolade at the 2014 The Game Awards and a 2012 Battle Royale, but donated his winnings to charity.

Genna Bain is the wife of TotalBiscuit and also the CEO of Cynical Brit and Axiom eSports, the latter being a South Korean StarCraft II team that she formed with Protoss player CranK, with John as a sponsor.

She introduced herself as a ‘gamer, voice actress, former podcaster, event makeup artist, SC2 tournament organizer, eSports agent and now a team owner’ on Reddit in 2013 and went on to voice many characters in games such as World of Warcraft.

Genna and John met back in 2005 at a video game convention called BlizzCon and they kept in touch over the next two years, before TotalBiscuit moved from the UK to the US to be with Genna.

As John was in the US on a visa-waiver program, he could not work and stayed at home to take care of her son Orion and worked on amateur broadcasting.

There was a time when he would fly and back forth between both countries every three months to abide by US law.

Genna later revealed that because of her husband’s fame, she would receive death threats from people who didn’t like his videos, or on the flip side, she would be hounded by fans wanting to take photos and videos.

After getting married, in 2011 John revealed on Team Liquid that again, because of visa issues, he had only seen his wife twice in two years and hadn’t seen his son Orion since 2008, which was difficult for the YouTuber as he considered him his own child.

TotalBiscuit also spent some time in an immigration detention centre before being sent back to the UK.

In the post, he explained that after being invited to Blizzcon, he was stopped at the airport by Homeland Security, was questioned for two hours and asked why he had entered through Mexico, even though he had not.

It has not been confirmed whether or not Genna will take over the TotalBiscuit channel, but John gave her permission in his Reddit retirement post.

After being diagnosed with terminal cancer in 2015, his failing health resulted in John Bain announcing his retirement on Reddit less than a month before he died.

‘When I went into hospital a week or so ago, it was accompanied by the news that conventional chemotherapy’s effectiveness had been exhausted.

‘My body has become resistant to all forms of it according to my oncologist. 46 chemo treatments, 138 days plugged into a pump. Let nobody ever say I wasn’t stubborn.

‘Unfortunately this was followed up a couple of days later with some more bad news. My liver is failing and its effectiveness has lowered past the point where the clinical trials I had been offered would take me on.

‘Yes apparently there are things that are too dangerous for even the terminal. Obviously we’re going to keep looking for other trials but I’m currently coming to terms with the fact that I don’t have long left and right now at any rate, there is literally nothing I can do about it other than try to manage the pain as best as possible and stay as hydrated as possible to ease the pressure on the liver,’ the post read. 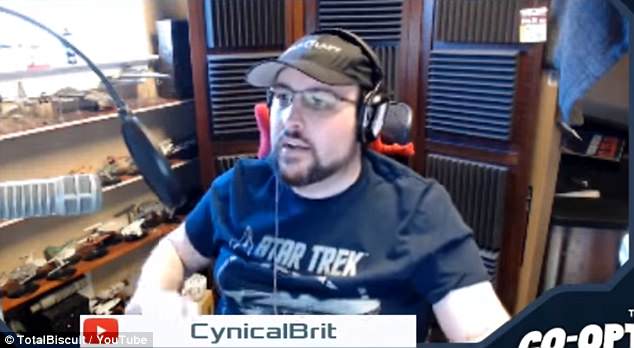 John Bain passed away on May 24, 2018 and Genna posted a poem to mourn her loss on Twitter

TotalBiscuit ended the post with: ‘Conventional treatments ineffective, liver too damaged for clinical trials that we know of. I’m retiring as a critic to spend whats left of my life sharing my love of gaming with my wife and all of you via co-op videos and streams.

‘The podcast will continue every week, with a streamlined two-hour format. We have no plans to launch any kind of donation campaign and suggest above a list of ways to support us if you would like to.

‘Thank you for reading, watching or listening and I will see you soon, along with Genna, on a stream or YT channel near you.’

John Bain passed away on May 24, 2018 and Genna posted a poem to mourn her loss on Twitter.