Finally the knees can stop trembling at Wembley as Harry Kane guaranteed Tottenham’s return to the Champions League.

Kane, who else? Not at his best and yet never shirking. Always willing and to the rescue again with a fabulous strike early in the second half.

It was his 39th goal of the campaign in all competitions and one to rescue Spurs from the brink of the annual wobble. 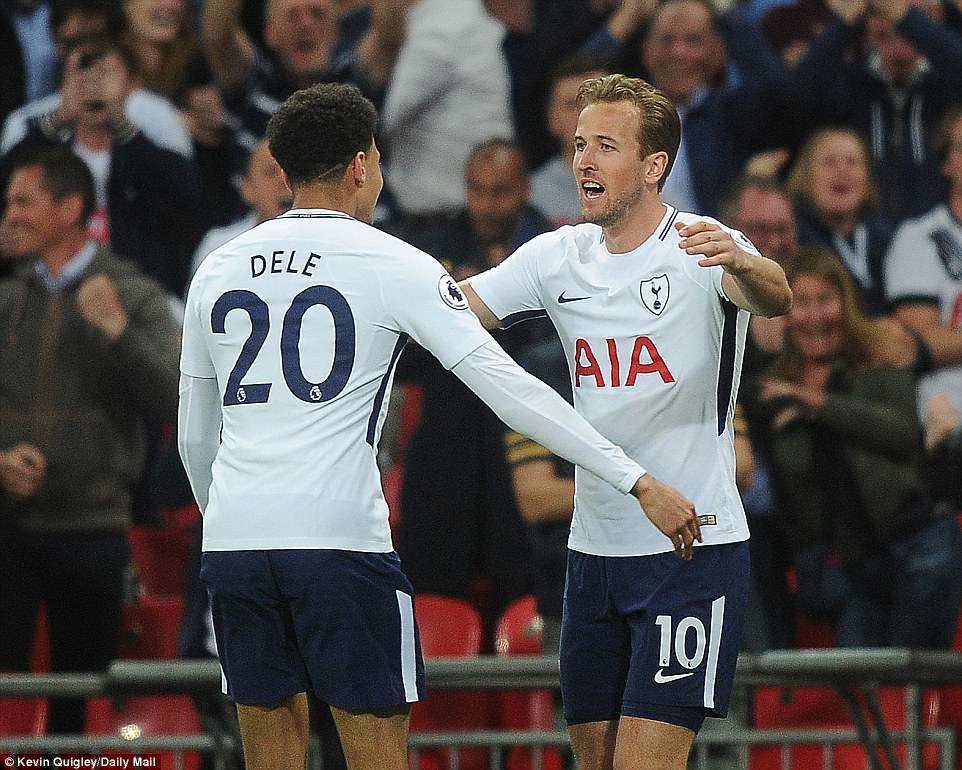 Dele Alli, who was involved in the build up to the goal, goes to hug his England and Spurs team-mate after they go 1-0 up 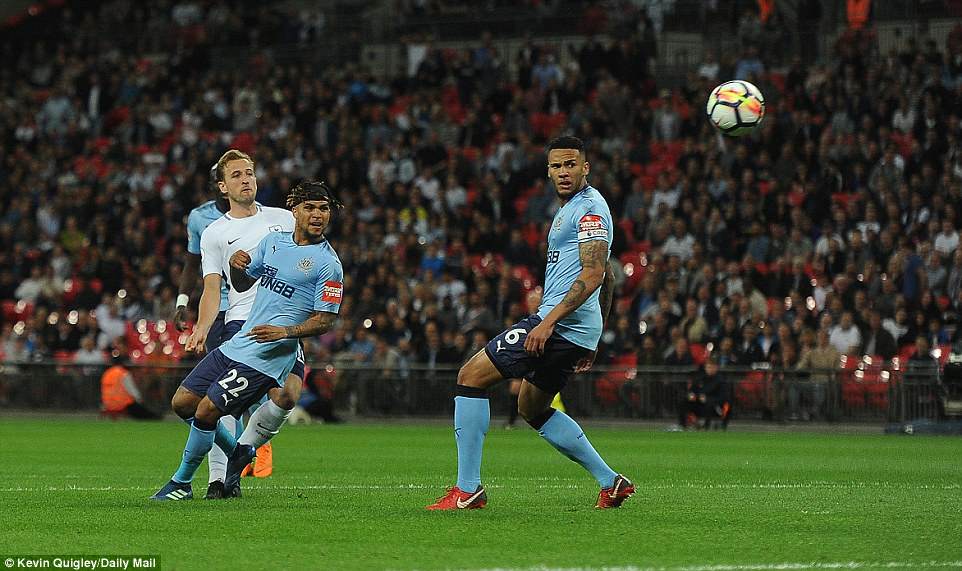 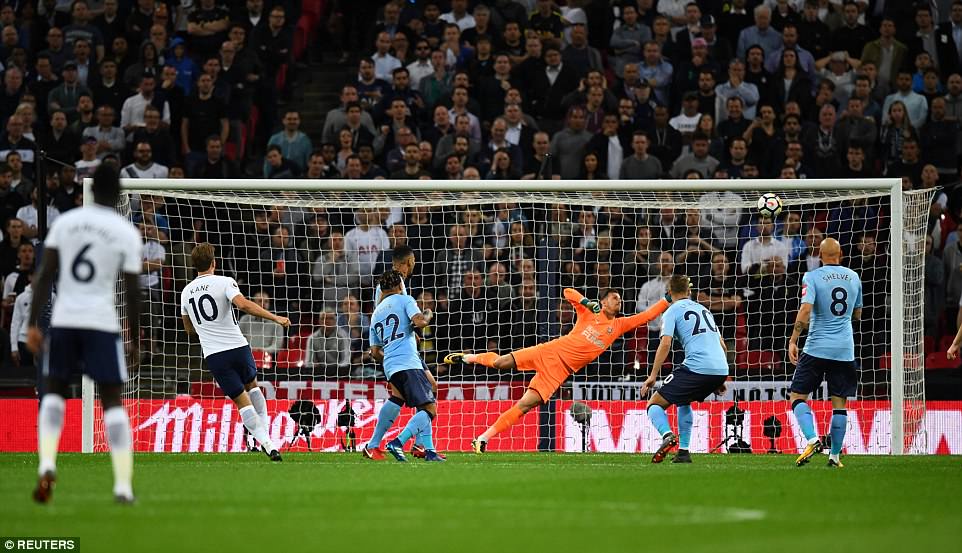 They were jeered off at half-time by a restless home crowd who spent most of the game glancing nervously at Chelsea’s score and transmitting fears to the players on the pitch.

Home fans gasped as they creaked at the back and hailed the splendid saves of their goalkeeper Hugo Lloris.

Newcastle proved dangerous on the counter-attack and Rafa Benitez complained about penalties not given but the visitors were not clinical enough to find the result their performance otherwise merited. 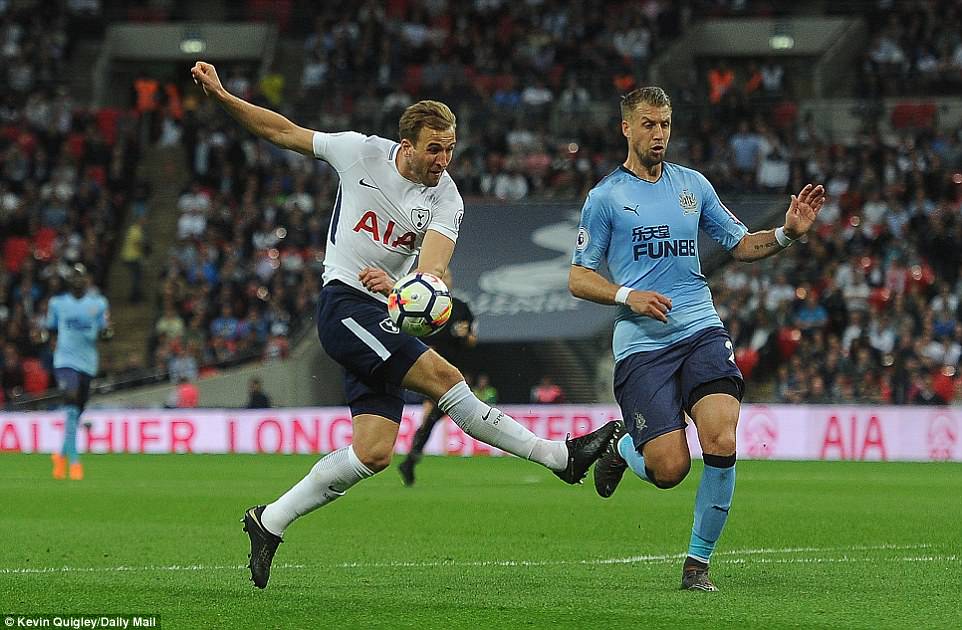 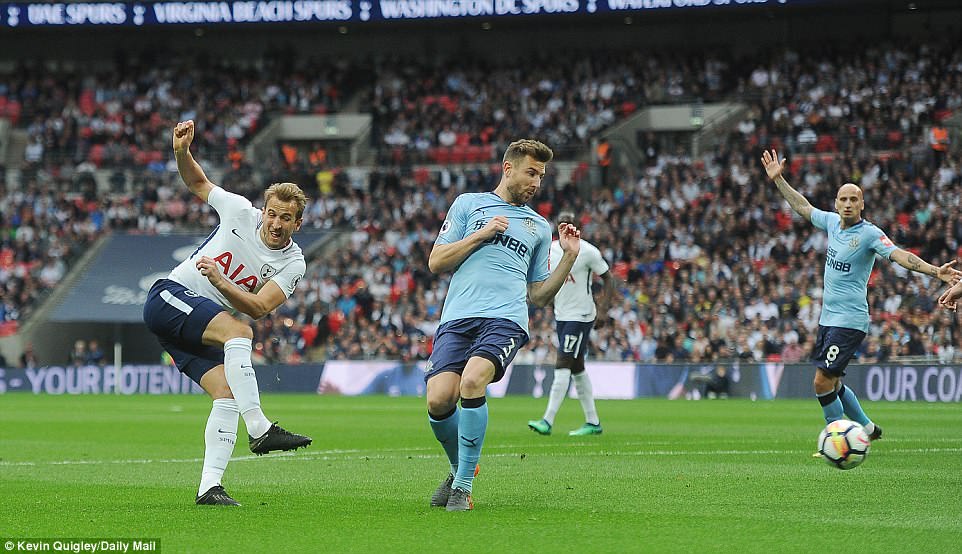 MAN OF THE MATCH:

Dele Alli, Harry Kane and Heung-min Son all link up as the Tottenham striker superbly side foots his effort high into the net. For more of Sportmail’s fantastic MATCH ZONE, click here.

The introduction of Toby Alderweireld as an 82nd-minute substitute, with Kieran Tripper forced off with a knee injury, was greeted with exaggerated cheers.

Alderweireld has been Tottenham’s most reliable defender under Pochettino but was injured in the autumn and has failed to regain a place in the team amid fitness issues and a breakdown in contract talks.

As it turned out, following the final whistle and a wave of relief, it was a night of celebration and not consternation in north London.

Chelsea were the team to stumble and Spurs hopped above Liverpool. 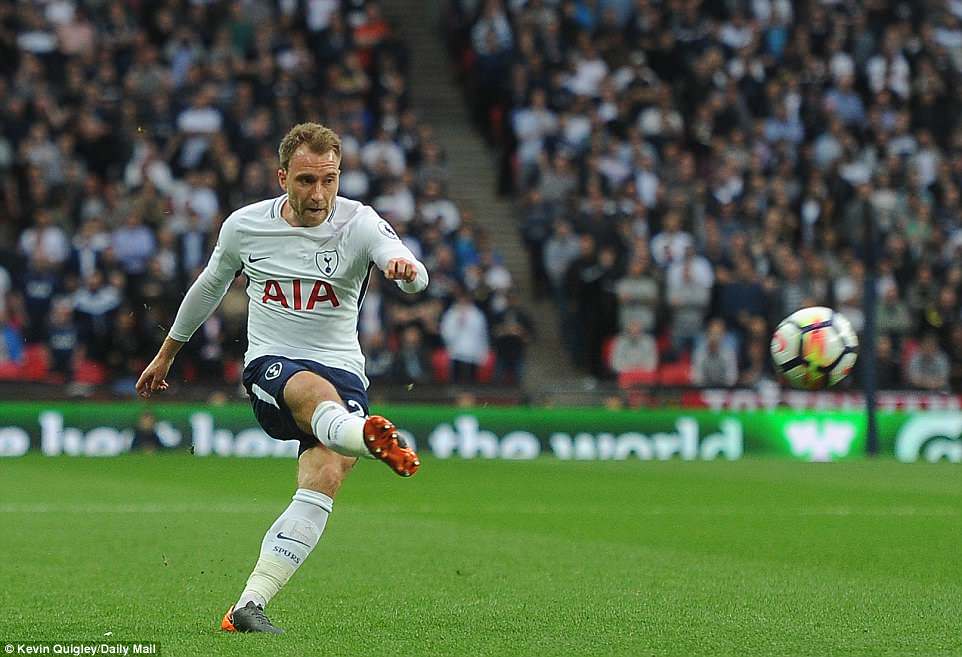 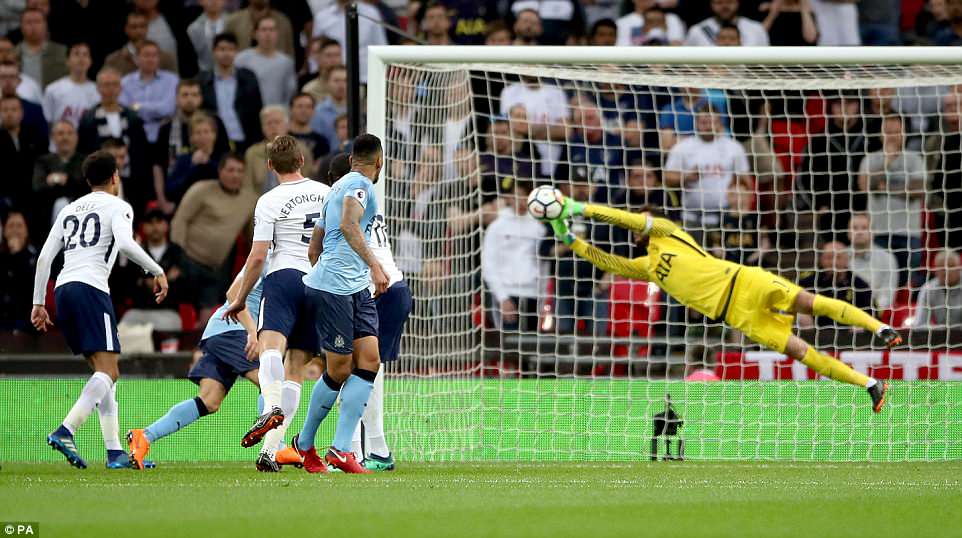 They will end the season as London’s top club and if they beat Leicester at home in their final fixture, on Sunday, they will claim a top-three finish for the third successive year.

More importantly, they can prepare to welcome Europe’s elite to their new stadium at White Hart Lane and to achieve qualification for the Champions League without a true home ground is an achievement which should not be underestimated.

Pochettino and his players have conquered their early fears at Wembley and in the end conquered their own nerves to make it across the line, even though their form has become sluggish.

Here against Newcastle they could easily have conceded the first goal of the game. 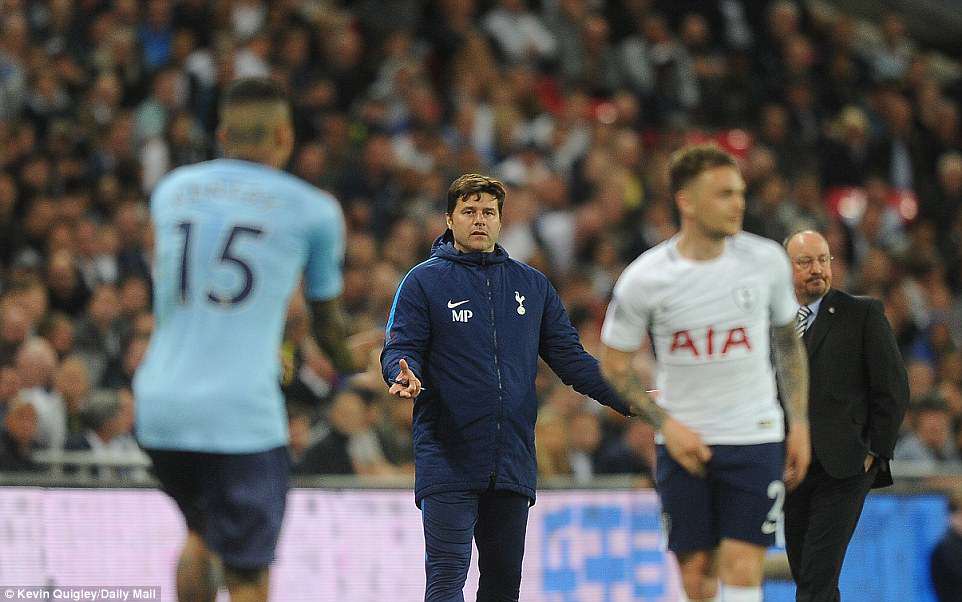 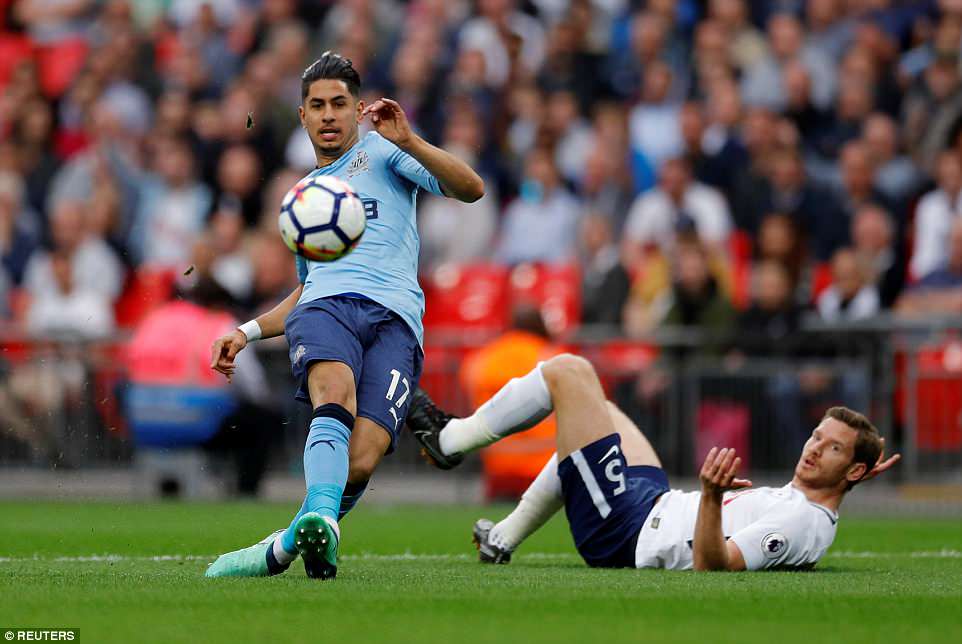 Moussa Sissoko, deputising in central midfield for Eric Dier who was ill, conceded an early free-kick on the edge of his own penalty box and Jonjo Shelvey curled it against a post.

The home crowd, one of Tottenham’s lowest of the season in the Premier League, shifted uneasily.

They had seen their side splutter to victory against Watford, another opponent with seemingly nothing to play for, in their previous home game.

Confidence has drained away and Lloris had to be alert and agile as Newcastle broke through them again.

Jamaal Lascelles met Shelvey’s deep cross at the far post and the Spurs goalkeeper sprang to his right to push his header wide. 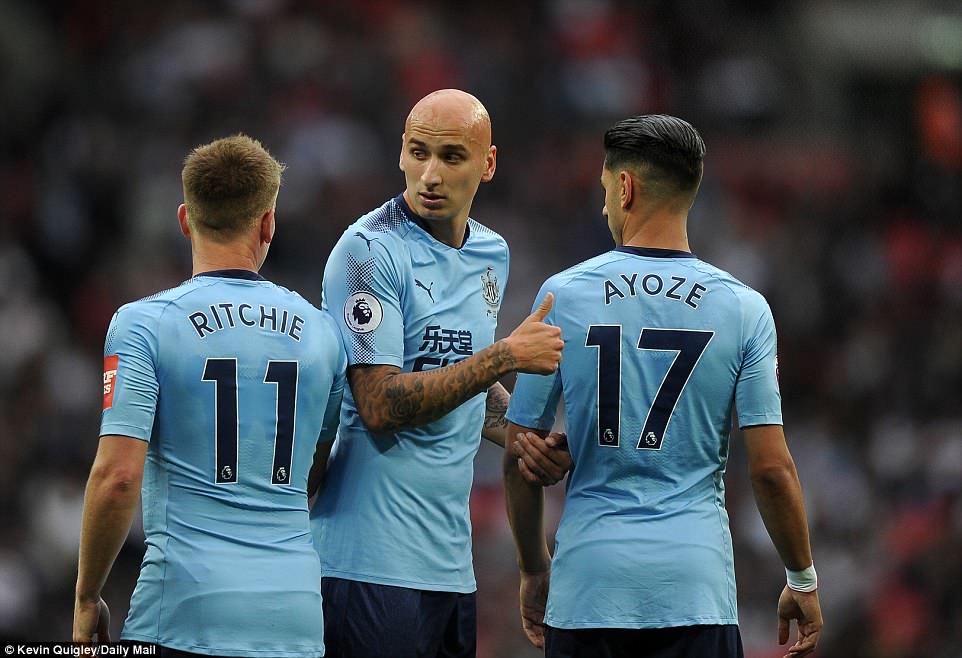 Matt Ritchie, Shelvey and Perez make a three-man wall as they look to keep out a Tottenham free kick in the second half 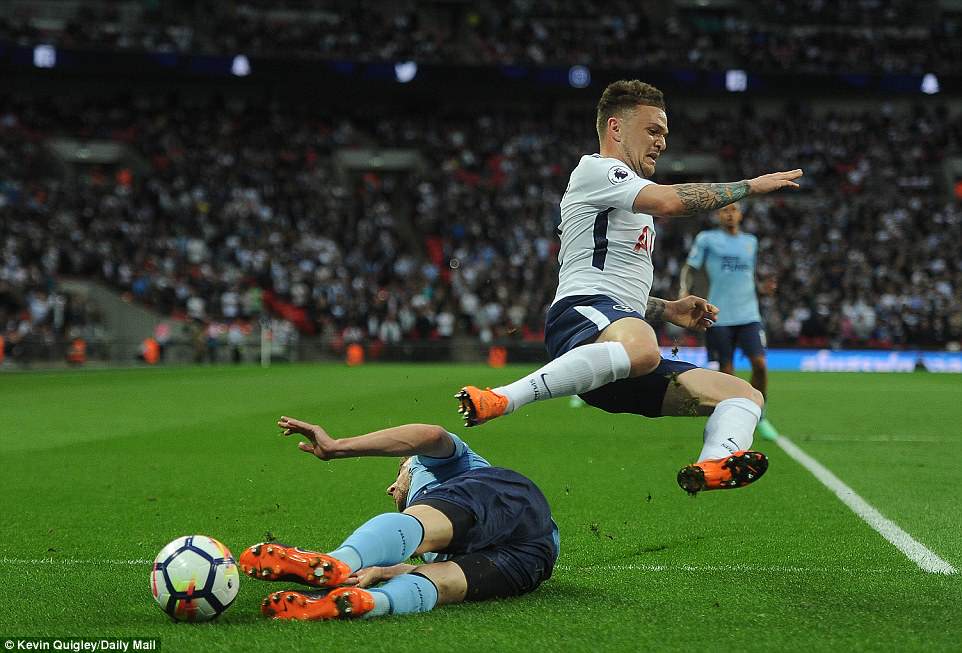 Moments later, another escape, as Dwight Gayle drifted away from Davinson Sanchez in the penalty area only to miss the target with a header from a cross by Ayoze Perez.

Another effort from Gayle was saved by Lloris before the interval.

At the back, Benitez had his team well organised with wingers Matt Ritchie and Kenedy chasing back to track the Tottenham full backs as they sought to advance.

A sure sign that Spurs were finding it hard to create came from Jan Vertonghen who broke out of defence, charged forward and tried his luck from 35 yards. 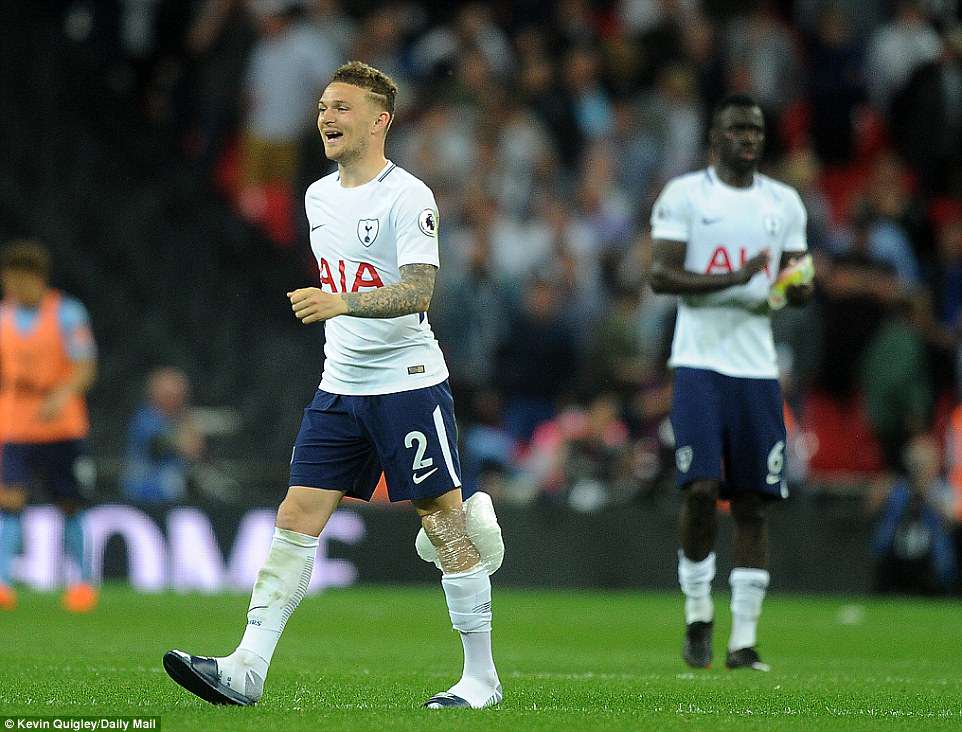 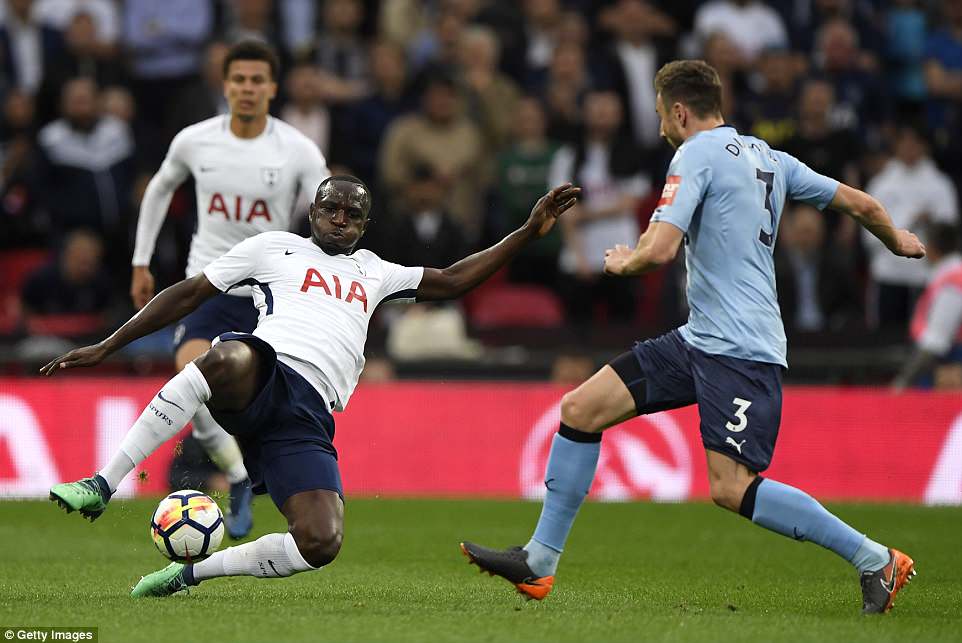 Moussa Sissoko, playing against his former side, lunges in to nick the ball away from defender Paul Dummett

Martin Dubravka made a routine save and was barely extended in the first half.

He cleared a teasing free-kick from Christian Eriksen and escaped when Kane then burst onto a long ball behind Florian Lejeune only to miss his kick completely as he attempted to strike it on the bounce.

When the next opportunity fell to him, Kane’s strike was clean, an exquisite first-time finish, curled into the top corner from just inside the penalty area, after a short pass from Heung-min Son.

He moved onto 28 Premier League goals for the season, but still three behind Liverpool’s Mo Salah in the race for the Golden Boot. 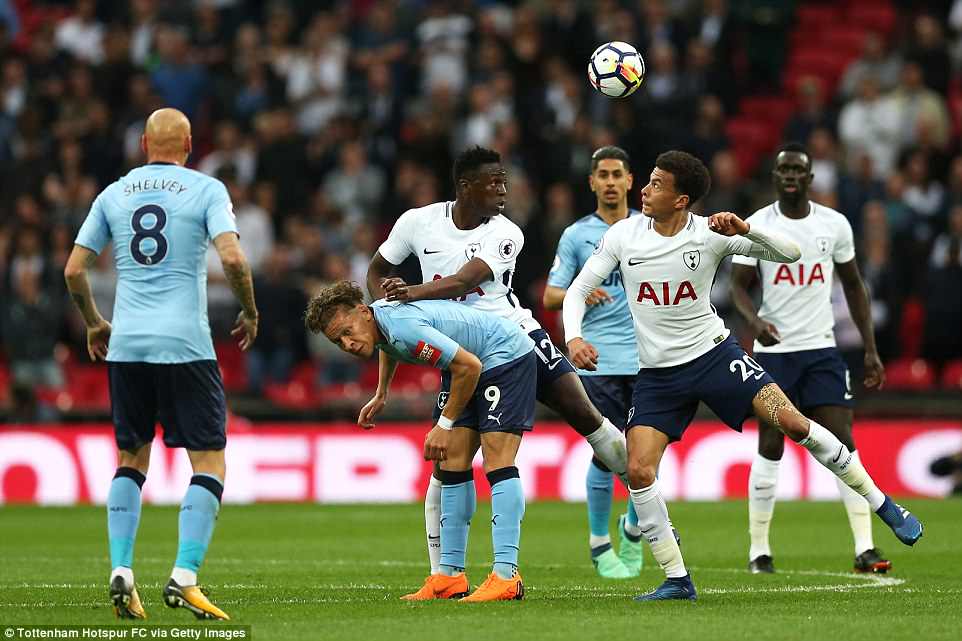 Dubravka denied Vertonghen and Dele Alli as the game opened up but the goal did not mark the end of the jitters.

Perez missed his kick when presented with a glorious chance on his left foot, Kenedy drove wide from the edge of the box and Jacob Murphy sped past Sanchez only to miss the target from close range.

Still Newcastle’s wait for victory at Wembley goes on. They have not won a competitive game at the venue since the 1955 FA Cup final.

This was their first visit since the Twin Towers were demolished.

They played like a team thrilled to be on this stage rather than one supposed to be on the beach, but it was not enough. 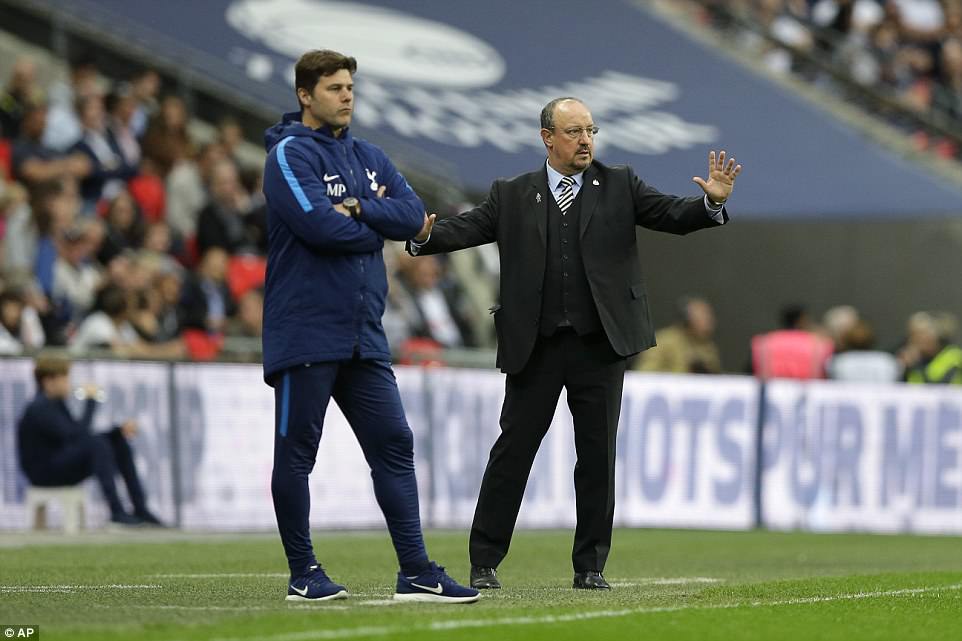