Dele Alli stepped forward to deliver the perfect flourish to his emotional homecoming to Milton Keynes, scoring the winning penalty in a shootout to fire Tottenham into the last-16 of the Carabao Cup.

Paulo Gazzaniga, having made a mistake to concede a late equaliser, restored his reputation by saving two Watford penalties.

Spurs were faultless from the spot and Alli stepped up to clinch victory which at one point seemed out of reach. 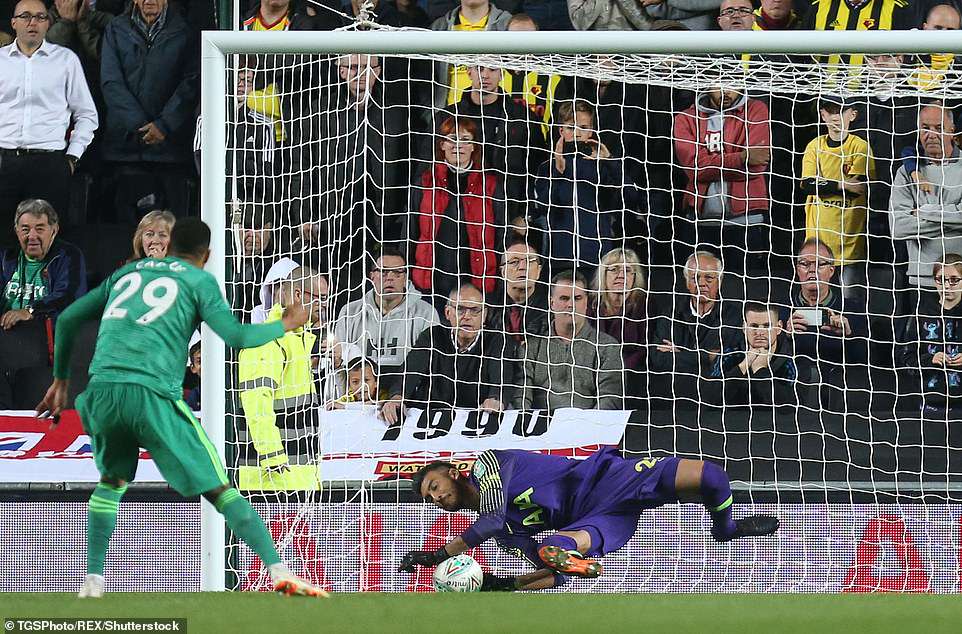 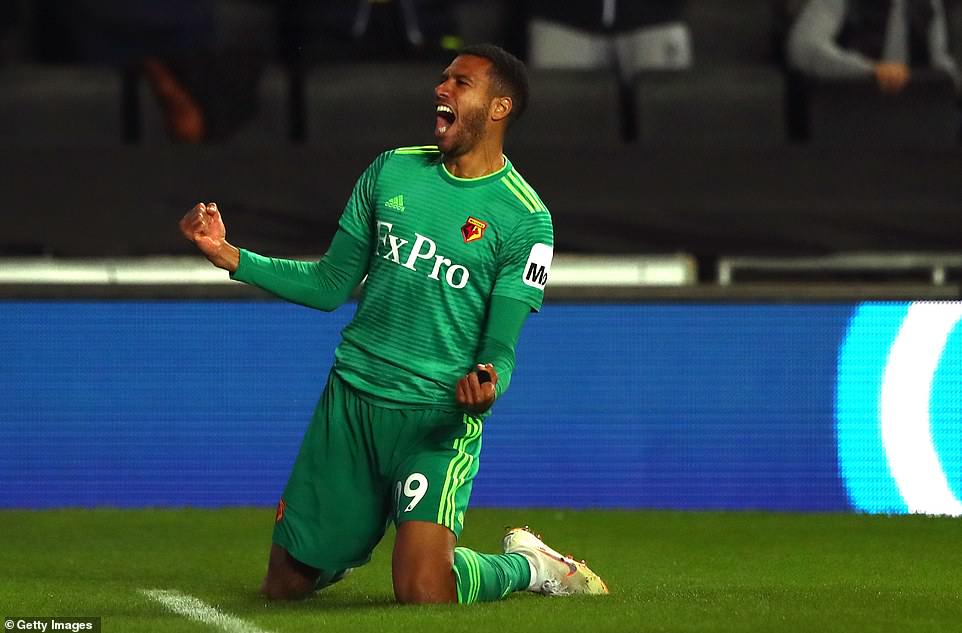 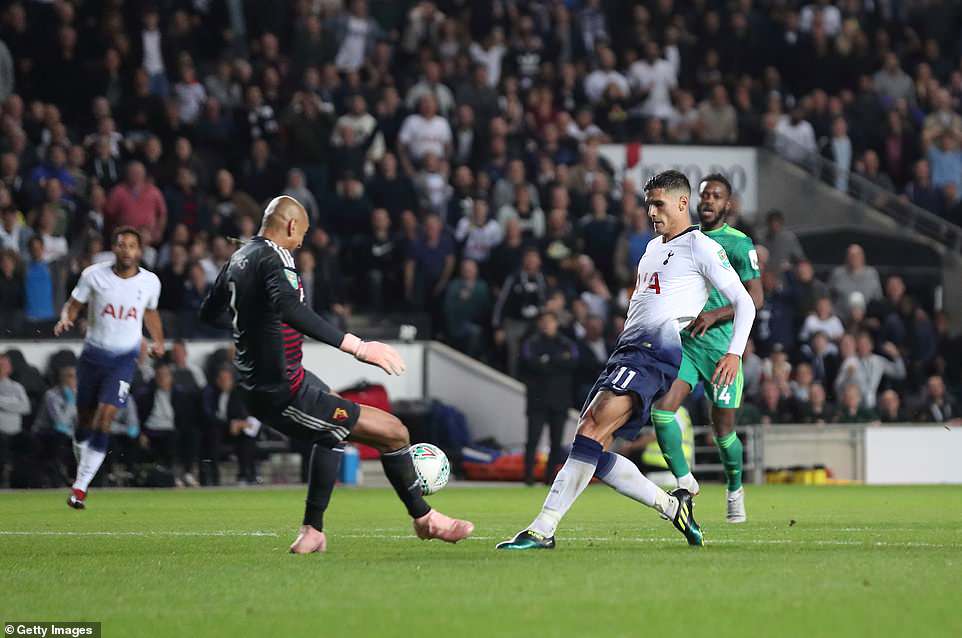 There was Chas ‘n’ Dave and the Danny Blanchflower voiceover before kick-off, Ledley King and the familiar refrain of McNamara’s Band at half-time.

The stylish modern stadium was bedecked in Lilywhite livery with cockerels at every turn and slogans about glory and daring to do.

Perhaps it was all a little too comfortable because Tottenham found it difficult to stir, played like a team in trance until they went behind.

They meandered into the first half as if they had all the time in the world before a place in the last-16 came their way.

And were still snoozing when carved open, just 41 seconds into the second half when Isaac Success fired Watford ahead.

The goal jolted Spurs into life. The manager made changes, sending on the first-teamers from the bench with Fernando Llorente finally providing the team with a focal point in attack.

Tottenham fans came to life with them.

Having battled through M1 roadworks and disruption on the trains from London Euston, there was a strangely subdued atmosphere at times.

‘You’re supposed to be at home’, crowed 4,000 from Watford fans, taunting the predicament of their homeless hosts.

They wanted to play at Vicarage Road. But the official attendance of 23,650 at the stadium:mk was comparable with the 23,926 who turned out to see Tottenham against Barnsley at Wembley, at the same stage of this competition, last season. 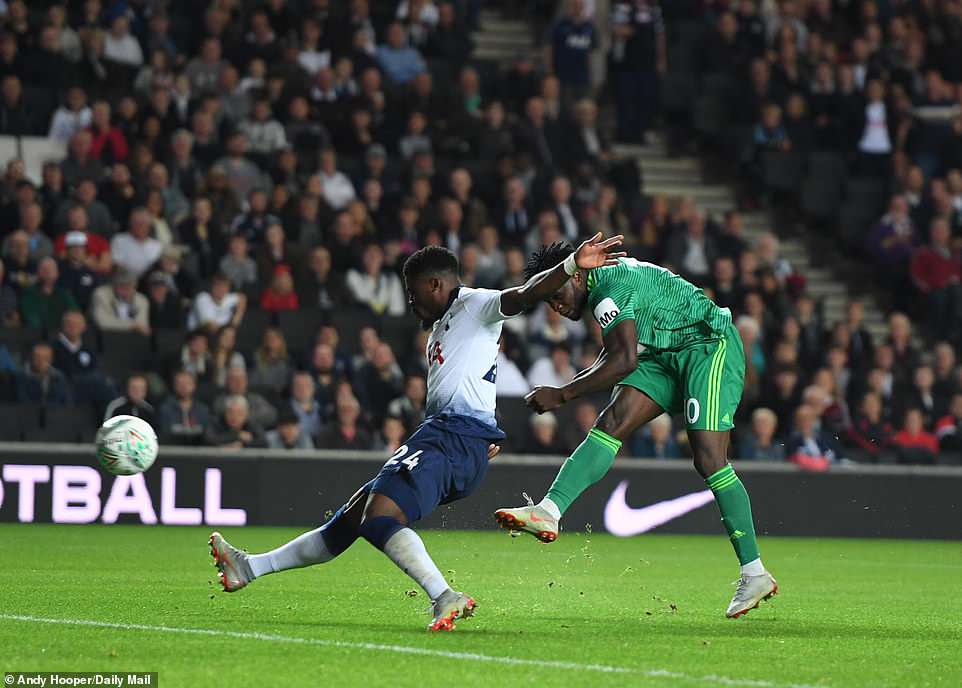 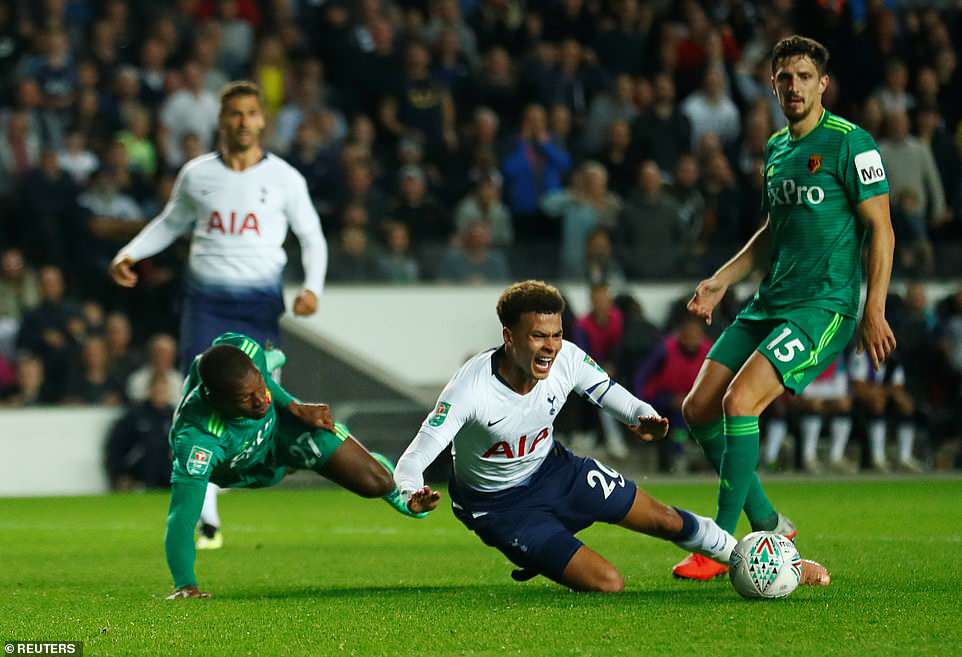 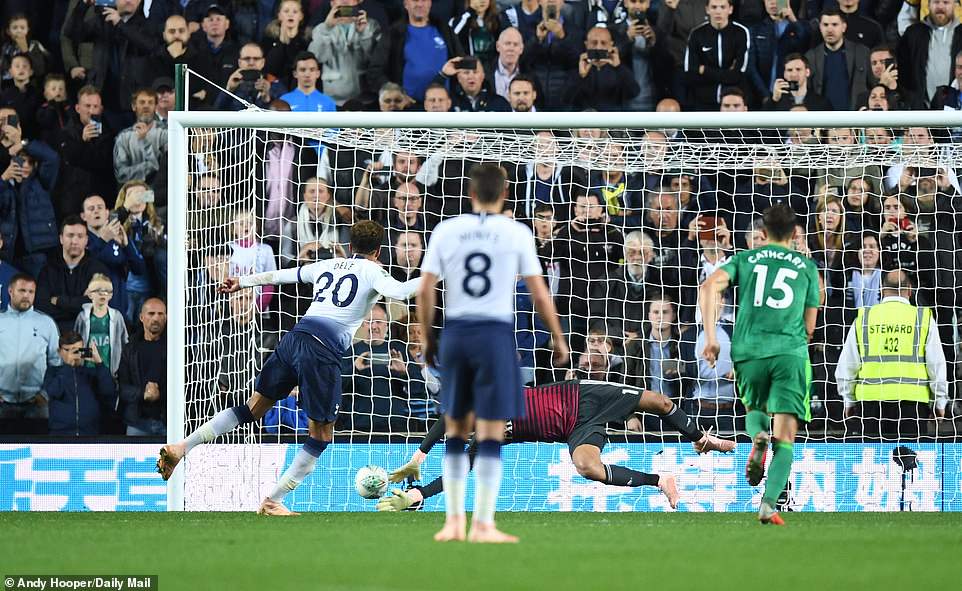 And more than the 20,141 who were at Vicarage Road, when these teams last met in the Premier League.

Watford stunned Spurs with a comeback win in the league but this time the roles were reversed.

Dele Alli levelled from the penalty spot with 10 minutes remaining, after Christian Kabasele fouled him from behind.

Kabasele was dismissed, just three minutes after coming on as a sub, and Erik Lamela grabbed a second with a delectable clipped finish to beat Heurelho Gomes from a pass by Mousa Dembele.

Tottenham thought that would be enough to book a place in the Carabao Cup fourth round but Watford reshuffled and equalised with the help of a mistake by Paulo Gazzaniga, deputising for injured ‘keepers Hugo Lloris and Michel Vorm. 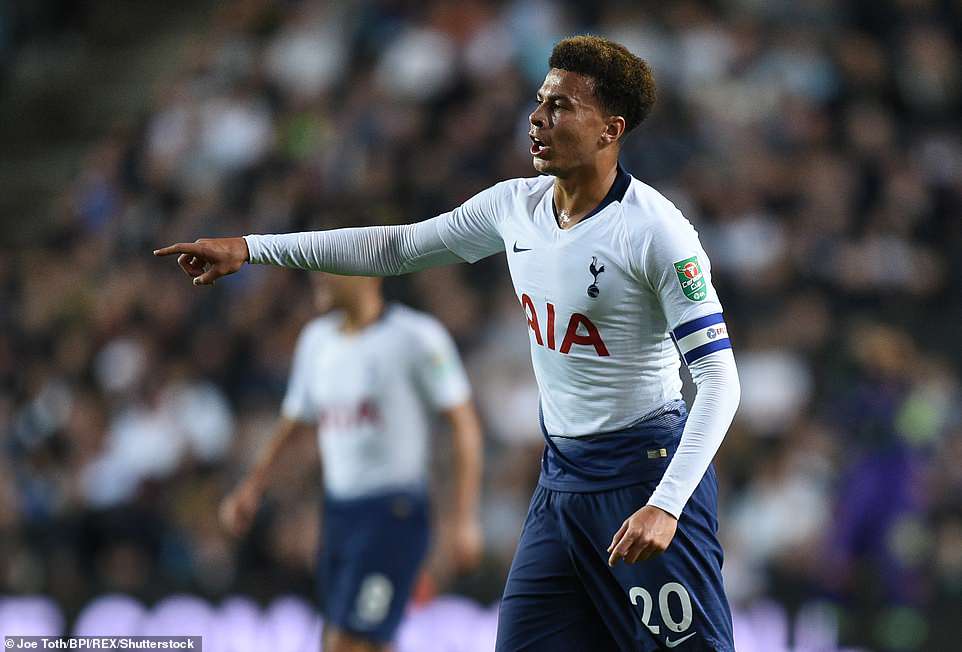 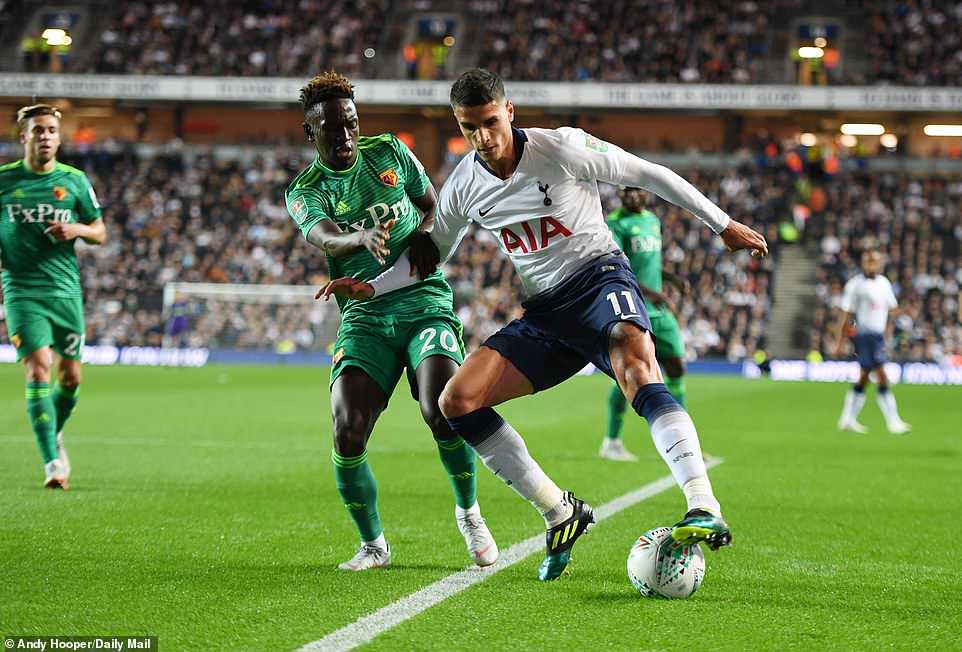 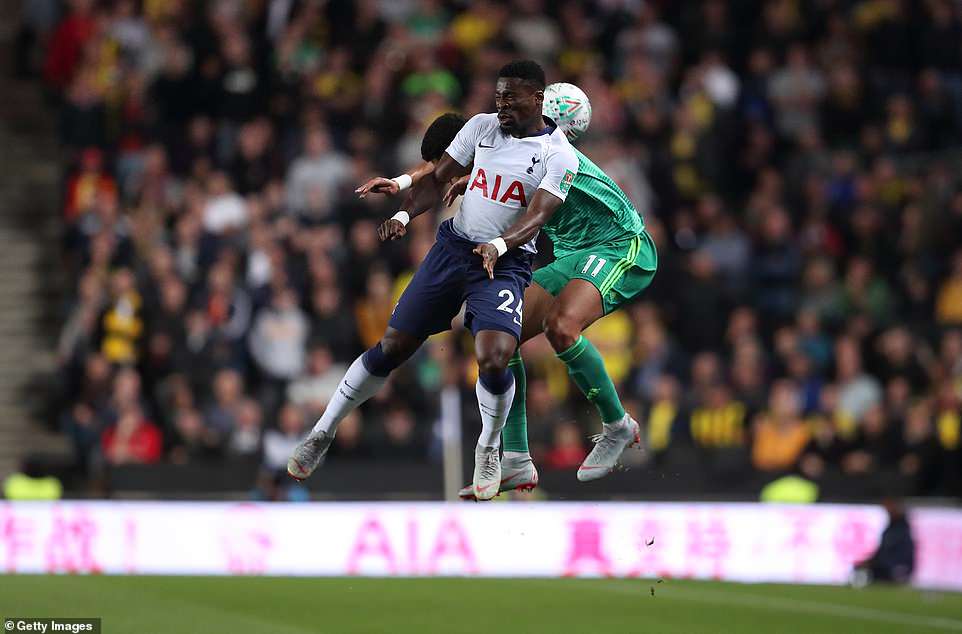 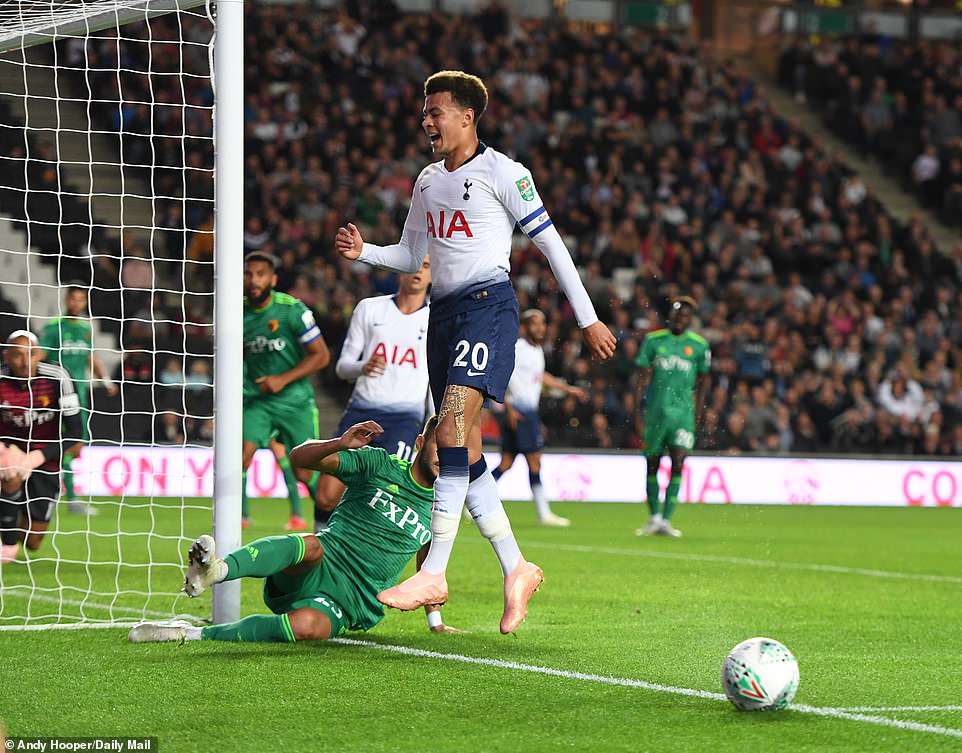 Etienne Capoue’s drive wriggled through Gazzaniga in the last minute and the tie went to penalties.

This high drama seemed a remote possibility as the game opened at a gentle pace, like a benefit match for homecoming hero Alli, who led the team out, making his first start since a hamstring injury he picked up on England duty.

Lamela started up front, through the centre, although, despite eight changes, there was a strong feel to Pochettino’s selection when compared to Watford.

Alli was guaranteed a warm reception, his name was cheered loudest and he stirred the crowd with an early run, collecting the ball on the edge of his own penalty area and accelerating to cover the entire length of the pitch and win a corner.

It is four years since Pochettino came to this same stadium to see him sparkle for Milton Keynes Dons in a 4-0 win against Manchester United in this competition before the manager gave his personal approval to a £5million transfer. 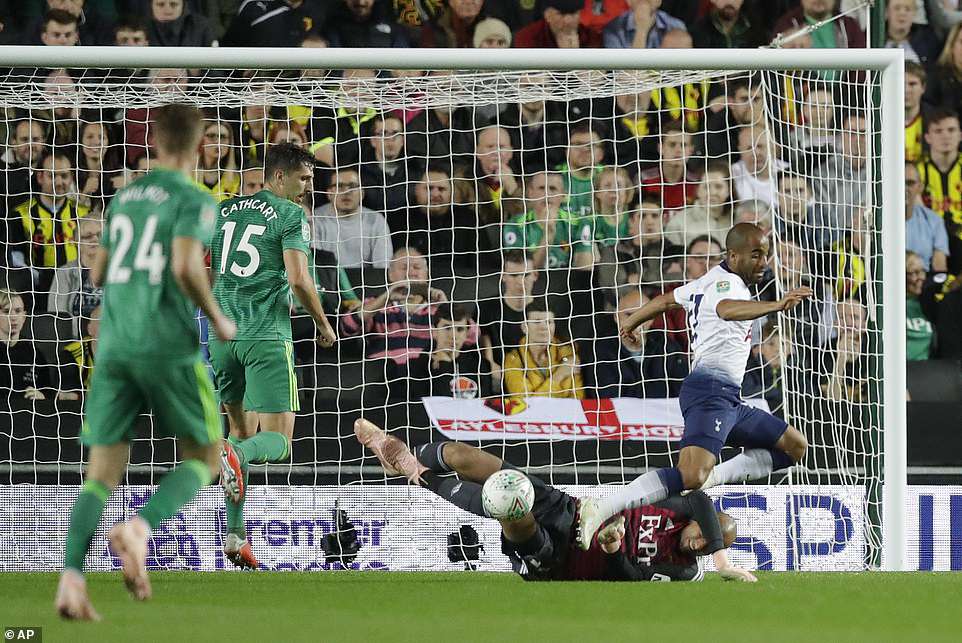 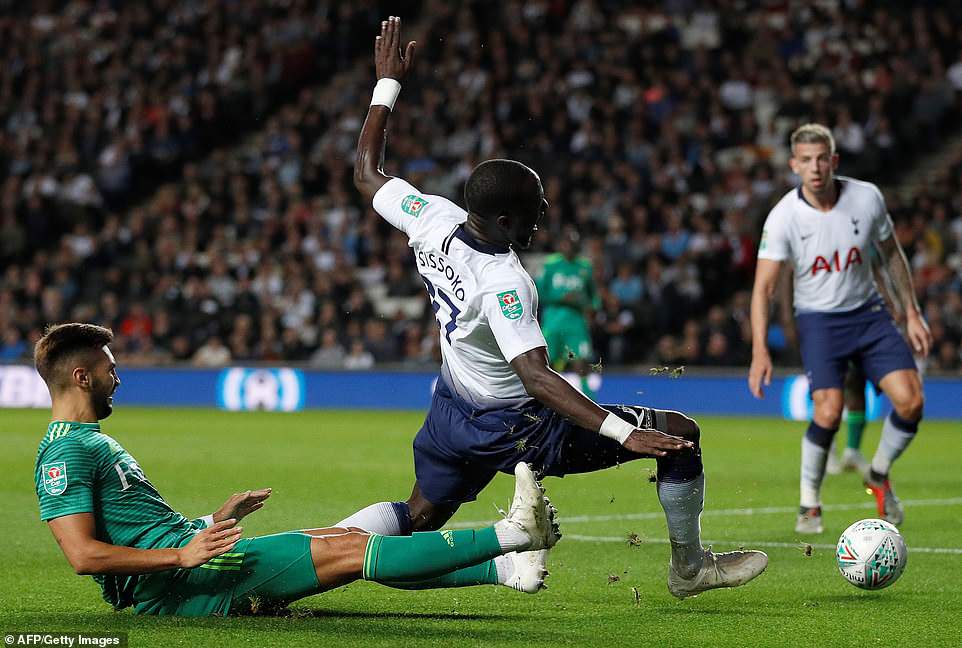 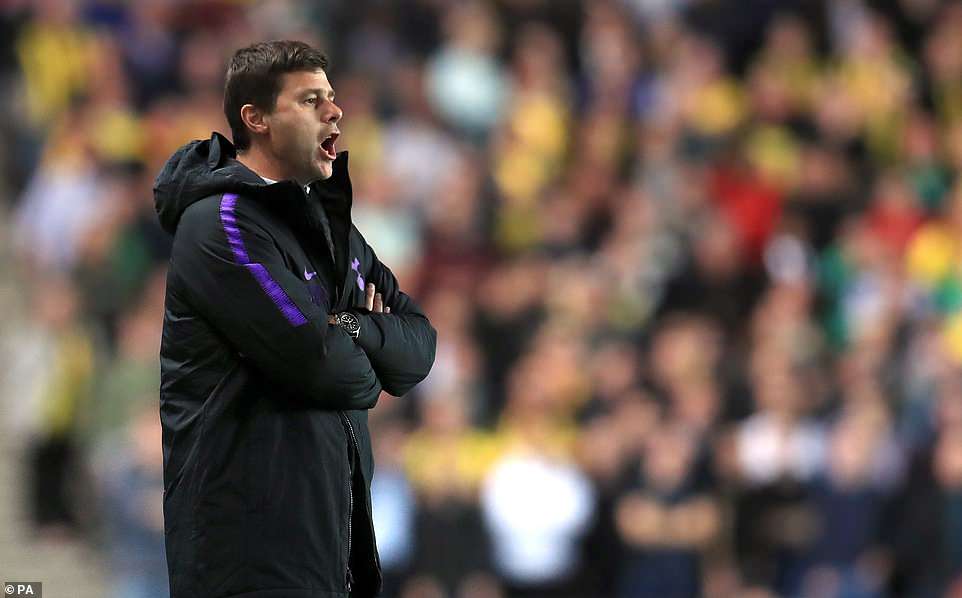 Tottenham dominated possession during the first half but with no zip in the pass and they were prone to over-elaborate around the fringes of the Watford penalty area.

Lucas Moura twisted into space on one occasion only to drag a cross-shot wide, neither on target nor into the path of a teammate. Victor Wanyama fired very high and wide as the interval approached and desperation crept in.

Gazzaniga made the first saves of the contest. First, diving left to deny Success and then scrambling back onto his line to gather an ambitious effort from distance by Marc Navarro.

Watford seemed to take confidence and Navarro connected sweetly with another long-range strike which dipped over Gazzaniga’s goal.

Serge Aurier made a fine recovery tackle to stop Ken Sema applying a finish to good approach play by Success, who found the

The second half was less than one minute old when Success found the net. 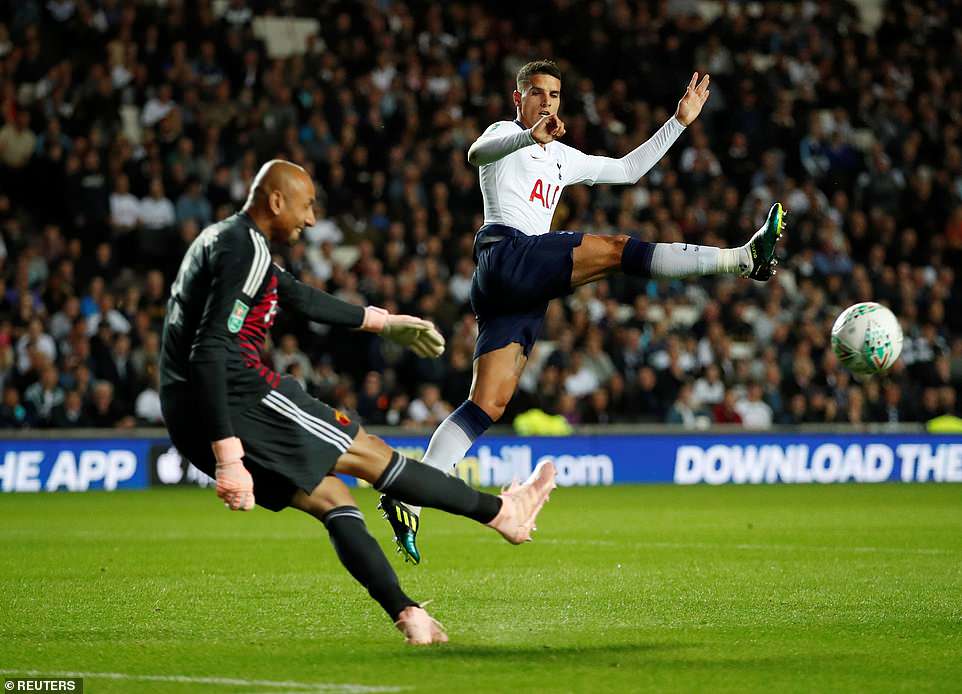 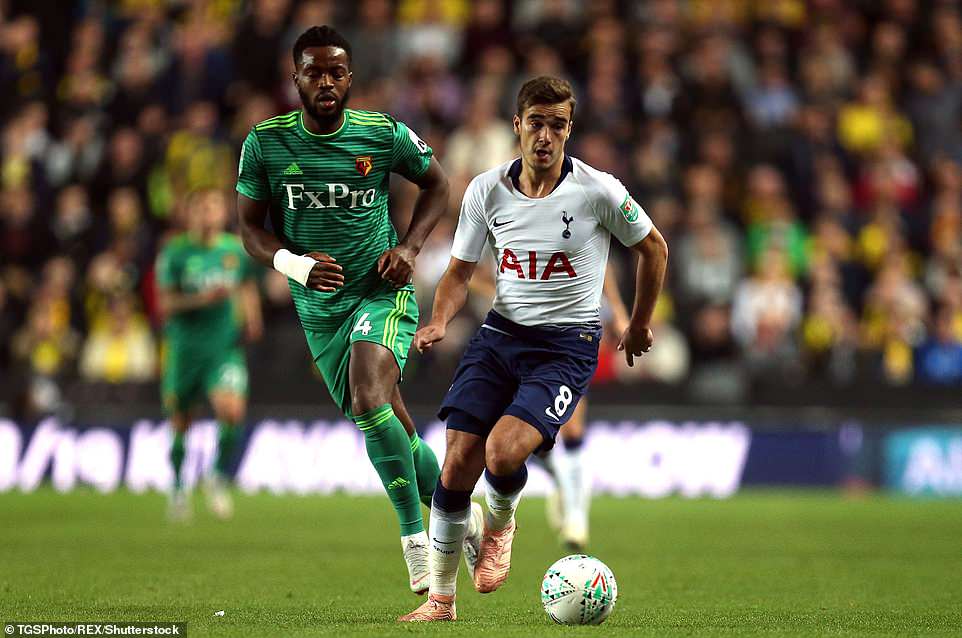 Kiko Femenia carried the ball inside from the right and rolled a pass into his path. Success held off a challenge as he brought the ball under control and smashed it beyond Gazzaniga. The visitors deserved their lead and the goal served to bring the tie to life.

Spurs managed to inject more urgency into their game and threaten Heurelho Gomes in the Watford goal. Alli volleyed over from a cross by Moussa Sissoko and there was a loud appeal for a penalty when Sissoko crashed the ball into Adrian Mariappa. Referee Lee Mason was unmoved.

Dembele, Heung-min Son and Llorente were scrambled from the bench and sent on with instructions to rescue the tie.

Watford sought a second on the counter-attack. All of which made for a thrilling finish. Kabasele committed the foul on Alli from behind which convinced Mason to point to the spot and produce his red card.

Alli stepped up to level, then Lamela put Spurs ahead before Capoue’s late strike and the shootout. 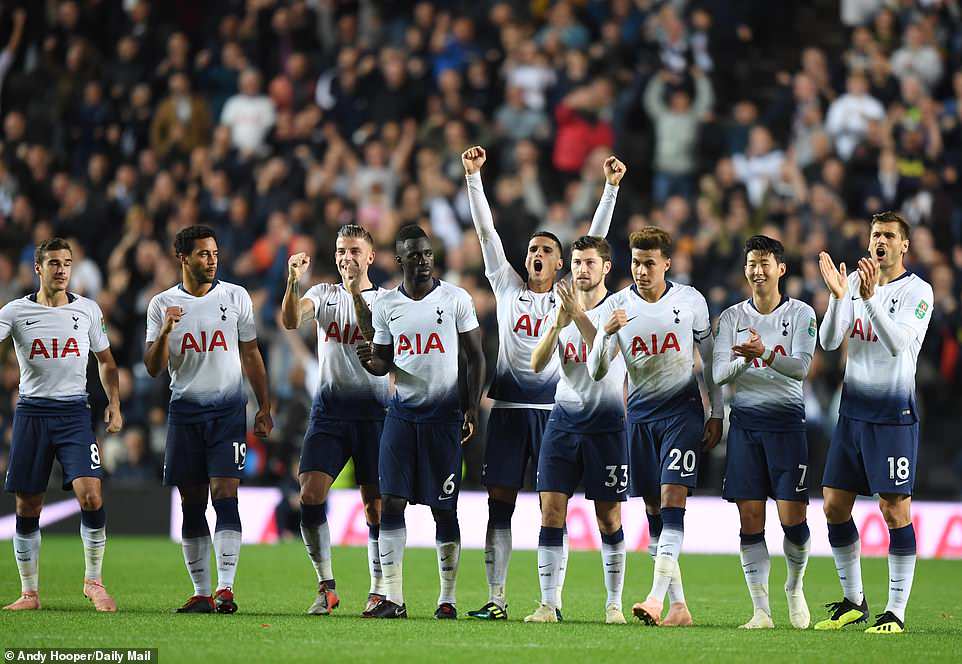 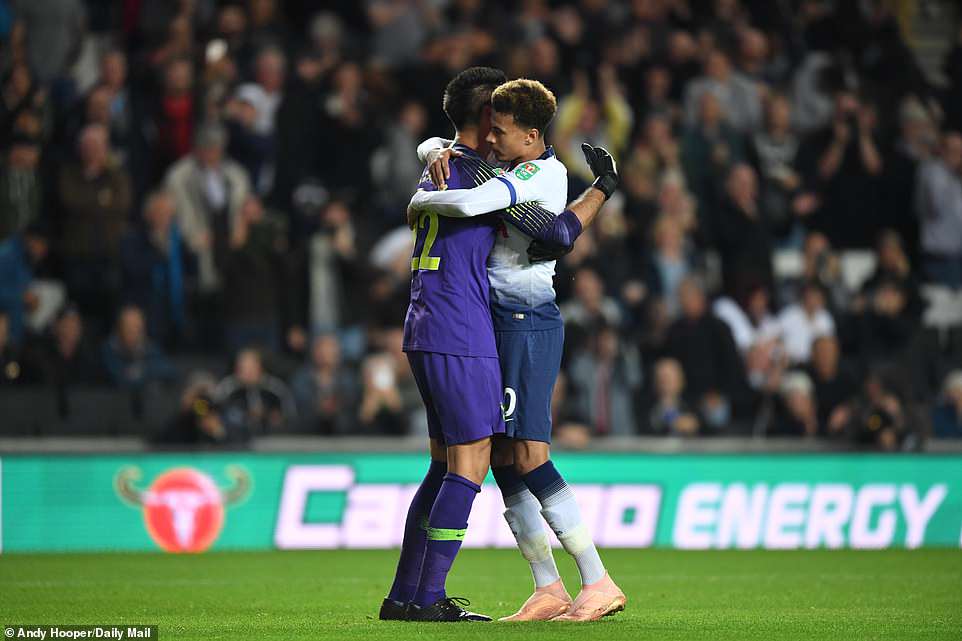