The Football Association have given Tottenham more time to decide whether to renew their occupancy of Wembley amid fears that their new stadium will not be ready for the 2018-19 season.

Spurs were due to tell the FA on Thursday if they wanted to continue using the national stadium next season.

However, Sportsmail understands the deadline has been moved back two weeks, to coincide with the announcement of the Premier League fixtures.

The FA declined to comment while Tottenham were reluctant to rule out the possibility of renewing the tenancy agreement, despite work on their new £800million home continuing at a frantic pace.

But senior football sources are beginning to question whether the 62,000-seat stadium will be ready even after a series of away games in August and the international break at the start of September.

The Premier League will allow Tottenham to play their opening three games away from home when the new season starts on August 11, having made allowances for West Ham, Liverpool and Blackpool in the past.

But if the stadium is not ready by the time the domestic season resumes after England’s European Championship fixture with Switzerland on September 11, it will raise a number of problems.

Premier League rules dictate that the location of a club’s first home game must be their home ground for the remainder of the season. 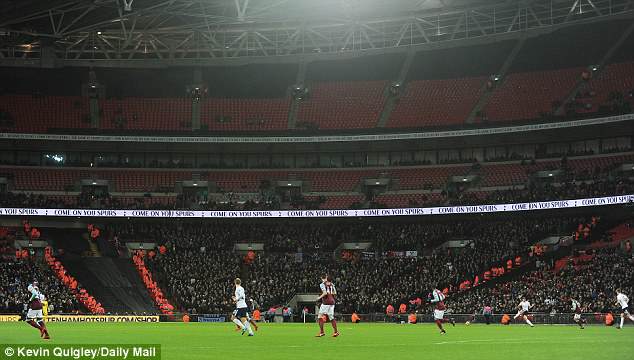 Changing that rule, and allowing Tottenham to play a few games at Wembley, could be discussed at next week’s Premier League summer meeting.

The club have already sold tens of thousands of season tickets for the new stadium, while a number of test events will need to take place for safety reasons.

The first NFL game at the new state-of-the-art Spurs stadium is scheduled for October 14. One option would be to switch that game to Twickenham, which is available.