Tottenham players face a reduction in wages and a loss of bonuses if they fail to qualify for next season’s Champions League.

Chairman Daniel Levy introduced an incentivised pay structure that rewards the squad for success but also protects Spurs financially in the event of missing out on the Champions League.

Their troubled start was compounded on Monday with the news that captain Hugo Lloris is set to miss the rest of 2019 with the dislocated elbow he sustained in the defeat against Brighton on Saturday.

The loss at the Amex Stadium leaves Spurs in ninth place in the Premier League with just three wins and a draw after eight games.

With Chelsea, Arsenal and Leicester all looking capable of sustaining a top-four challenge, Spurs’ four consecutive season stay in the Champions League appears to be under serious threat.

Tottenham’s difficult start to the season has cast doubt over manager Mauricio Pochettino’s future at the club.

But the Argentine’s position is not under any threat from within the Spurs hierarchy. 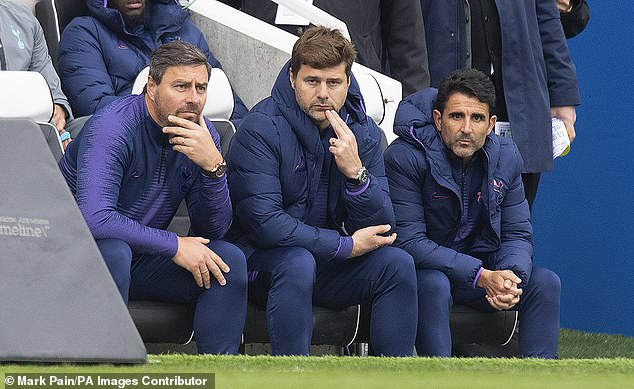 Meanwhile, goalkeeper Lloris will miss the rest of the calendar year with the horror injury he suffered at Brighton on Sunday.

The Spurs skipper’s injury, which will not require surgery, meant he had to pull out of France’s forthcoming games against Iceland and Turkey.

And his national team boss Didier Deschamps said yesterday: ‘It is difficult to say how long he will be out — I am not a an expert on anatomy.

‘As far as we are concerned, he will obviously not be there for these matches, nor the next ones. Protocols will be put in place for his rehabilitation.

‘We are talking about weeks, even months. He will not return to the field in 2019, it is a near certainty.’

Lloris’ injury means understudy Paulo Gazzaniga will now receive an extended run in the starting XI for Pochettino’s side.