Tottenham have taken a dig at their London rivals, Arsenal and Chelsea, with an advert for their new stadium, which boasts that it’s the ‘only place to watch UEFA Champions League in London’.

The North-London side are preparing to move into their brand new 62,000 capacity stadium next season and are still promoting their ‘premium seats’ with adverts on London’s underground.

They will finally be able to play their Champions League home fixtures at their new ground after two years of hosting European ties at Wembley.

Arsenal and Chelsea will play in the Europa League having missed out on the top-four, after both sides had disappointing league campaigns. Though Chelsea did clinch the FA Cup.

Tottenham will be joined in Europe’s elite competition by Manchester City, Manchester United and this season’s runners-up Liverpool.

There is still work to be done on Spurs’ new stadium and with the 2018/19 Premier League fixtures set to be announced on June 14, it is expected that they will play the first four games of the season away from home. 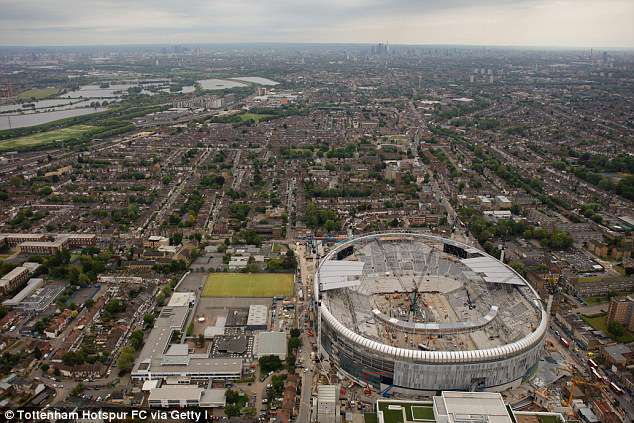 The stadium is currently called ‘The Tottenham Hotspur Stadium’, but it is thought they will follow down a similar avenue to other teams, including Arsenal, by selling the naming rights.

Another deal was completed earlier on Wednesday as Spurs agreed on a revolutionary partnership to supply beer from a local microbrewery.

Beavertown brewery are now the ‘Official Craft Beer Supplier’ for the North Londoners and will operate a microbrewery from inside the new £800m ground.