Touching video reveals paralysed man, 24, laughing with his mother during their morning routine

A touching video has revealed the intimate morning routine of a man who became paralysed after breaking his neck when he jumped into the sea.

Zack Collie, 24, suffered the life-changing injury nine years ago when he was 15 and now requires help with everything in his day-to-day life.

Despite regaining small amounts of movement in his arms and legs, Mr Collie is too weak to hold everyday objects and can’t move his own bodyweight.

Both Mr Collie and his mother can be seen laughing and hugging in the time-lapse video showing them getting him out of bed, showered and dressed for the day.

The emotional video shows Mr Collie and his mother, Amber, laughing and smiling together as they get him out of bed, showered and ready for the day

Although Mr Collie, from Newport Beach in California, is now a C-4 quadriplegic and admits he is living trapped in ‘a body that no longer works’, he said he loves his life.

‘My life has been very difficult since my accident,’ he said. ‘When I was first injured, I had no movement below my neck. I could not raise my hand to itch my face.’

‘I could no longer feed myself, take a shower on my own, shave, dress, do my hair, brush my teeth and much more.

‘I was now entirely dependent on others taking care of me so that I could have a decent quality of life. I felt hopeless and discouraged about my life.

‘Fully dependent on other is not how I wanted to live, especially for the rest of my life.

‘But now I love my life. I have accomplished more right now than I would have in my entire previous life.’

In the footage, Mr Collie’s parents Amber, 46, and Adron, 48, help him get out of bed and his mother helps him shower, brush his teeth, get dressed and style his hair.

Every movement looks difficult for the pair of them but they both appear to smile and laugh throughout, embracing in a loving hug at the end. 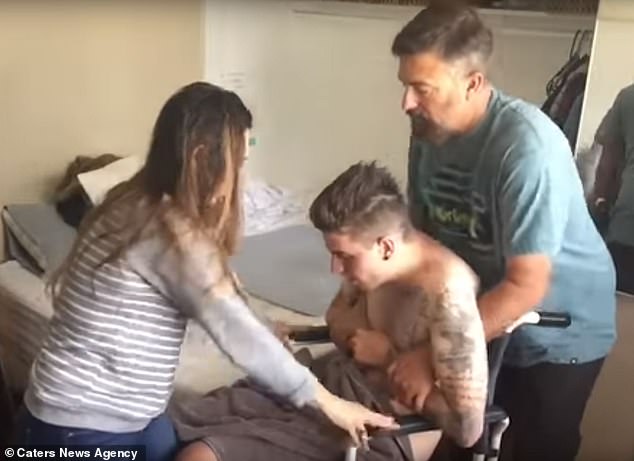 Mr Collie’s mother and his father, Adron, lift him out of bed in the morning into a wheelchair so he can go to the bathroom, brush his teeth and shower. The 24-year-old has regained some movement in his arms and legs since the accident but is too weak to lift himself 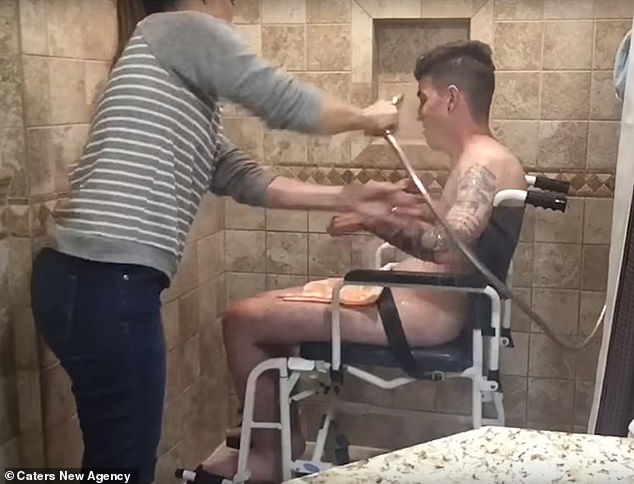 Mr Collie’s mother helps him shower in the intimate video which gives a behind-the-scenes look at the life of the 24-year-old, whose life was changed forever after a swimming accident eight years ago

WHAT IS A C-4 PARAPLEGIC?

A C-4 spinal cord injury is one of the most severe types of injuries to the spine.

It involves damage to the area around the fourth vetebra from the skull, and causes paralysis in the arms, legs and trunk.

Paralysis is caused by damage to the nerves, which are fibres carrying electrical signals from the brain to the muscles around the body and control everything movement and sensation.

When the nerves are damaged – either bruised, cut or completely severed – parts of the body stop working, and it can take years to recover, or they may never recover at all.

C-4 paraplegics need assistance with daily activities because, even if they regain some movement, they will likely be unable to carry out normal tasks without help.

Mr Collie lost all movement from his neck down after injuring his spine when he jumped into the ocean as a teenager.

He and his friends were running towards the sea and, when Mr Collie dived into an oncoming wave, hit a sandbar headfirst despite having his hands out in front of him.

He had dived into the sea ‘hundreds of times before’, Mr Collie said, but this time it went horribly wrong.

‘Instantly after the impact my whole body went numb and tingly similar to when your arm falls asleep,’ he said.

‘In a split second, I went from being able to move every muscle in my body to moving nothing.

‘I knew my friends would think I was messing around and by the time they realised something serious had happened, by then I would have already inhaled water.

‘But my friend ran over to me and flipped my body, so my face was out of the water.

‘He pulled my body out of the water and my friends who didn’t know the magnitude of the incident thought I was playing a prank on them. My arms just fell to the ground as if they were not a part of my body.’ 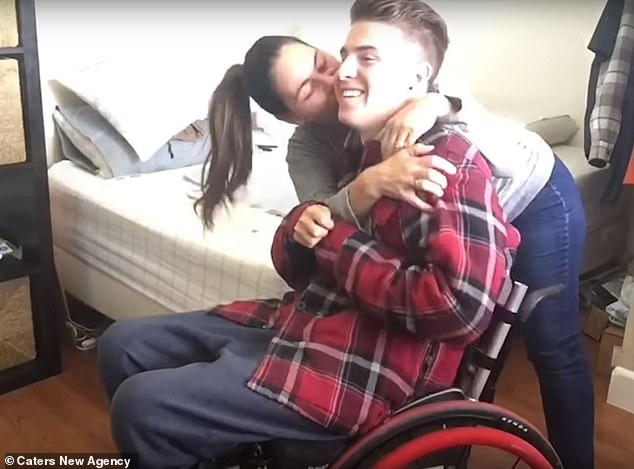 Mr Collie said that although being fully dependent on others for everything was not how he ever envisaged spending his life, he is happy and loves his life and his family 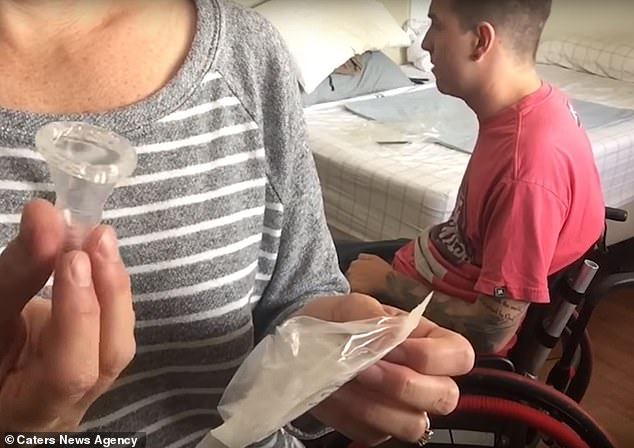 The video shows intimate aspects of Mr Collie’s life, including him having to attach a catheter (pictured) before he leaves the house in the morning

Mr Collie has now moved out of his parents’ house and lives with a carer.

He said the accident transformed him from a ‘typical’ selfish teenager into a man who loves and cares for his family.

Mr Collie said: ‘I have grown so much from this injury and it is the reason why I am the person I am today. It changed my heart and made me realise I want to help others.

‘Growing up, I did not have a good relationship with my family. I was the typical 15-year-old teenager that only cared about himself.

‘After my accident the relationship with my family did a full 180. This accident brought me closer to my siblings and parents.

‘This injury has matured me in ways I never would have if it didn’t happen.’