Touchscreen happy children are too weak to hold pencil

Toddlers are struggling to grip pencils as their excessive use of touchscreens leaves the muscles in their hands too weak, specialists have warned.

Paediatricians have joined orthopaedic therapist and handwriting experts to warn of children damaging their dexterity by overuse of touchscreen phones and tablets, leading to a lack of agility in their hand by the time they start school and are taught to write.

As children are using their hands less to hold paintbrushes, scissors, and crayons and aren’t using more traditional toys like playdough the muscles in their shoulder, elbow and wrist do not develop properly.

‘Children coming into school are being given a pencil but are increasingly not be able to hold it because they don’t have the fundamental movement skills.

‘It’s easier to give a child an iPad than encouraging them to do muscle-building play such as building blocks,’ said Sally Payne, of the Heart of England NHS Foundation Trust

‘They’re not developing the skills they need to grip and hold a pencil’ she told the Guardian.

The National Handwriting Association (NHA) also warned that the overuse of touchscreens is stifling muscle development of toddlers leading to worse handwriting skills.

A recent study found that 58 per cent of under twos had used a tablet of mobile phone.

Many nurseries have also installed interactive ‘smartboards’, as well as touch-screen computers to help children hone in their digital skills from an early age. 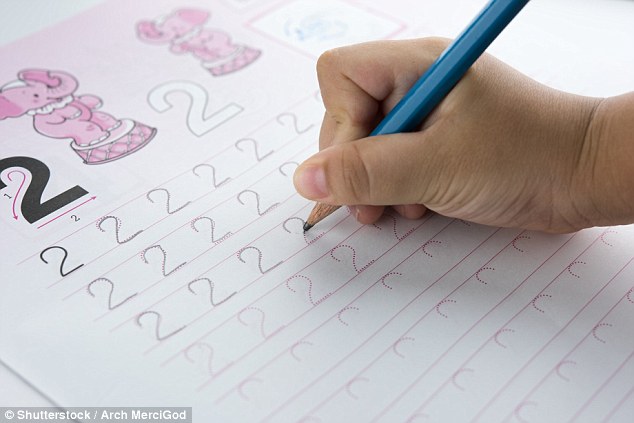 Mr Drew, who has led the school for almost 20 years and has advised the government on education, said children did not appear to be as active in the internet age.

He said the problem has become noticeable in the last two years and too many parents are giving their children electronic devices to play with instead of letting them run around.

Mellissa Prunty, a paediatric occupational therapist and vice-chair of the NHA said: ‘The risk is that we make too many assumptions about why a child isn’t able to write at the expected age and don’t intervene when there is a technology-related cause’.

The Association of Teachers and Lecturers warned in 2014 that there was an increase in the numbers of children unable to perform simple tasks such as using building blocks due to weak hands.

Karin Bishop, an assistant director at the Royal College of Occupational Therapists, added: ‘Whilst there are many positive aspects to the use of technology, there is growing evidence on the impact of more sedentary lifestyles and increasing virtual social interaction, as children spend more time indoors online and less time physically participating in active occupations.’