A Polish tourist who got lost while hill-walking in Montenegro accidentally started a devastating forest fire when he tried to signal for help.

The rambler lost his way near the coast in southern Montenegro, and called for help before lighting a small bonfire to alert authorities to his position.

However, the fire soon got out of control, and a huge blaze – seen in a video recorded by an eyewitness – is now threatening the popular tourist resorts of Susanj and Bar.

Accident: The tourist was walking in the hills near the seaside resorts of Susanj and Bar, in southern Montenegro, when he realised that he was lost and lit a bonfire to signal for help

Wildfires have raged across the Balkans, including Croatia, Serbia and Montenegro, in recent weeks due to a combination of high temperatures and a lack of rain.

The latest blaze was started on Tuesday, when the tinder-dry vegetation enabled the small bonfire to rapidly spread from the top of the hill where the tourist was walking and take hold in the surrounding forest.

He said: ‘I was informed that a Polish mountaineer who was lost in the hills, in order to signal where he was located, set fire to the forest and the fire immediately spread to a large part of the hill due to wind and dry vegetation. 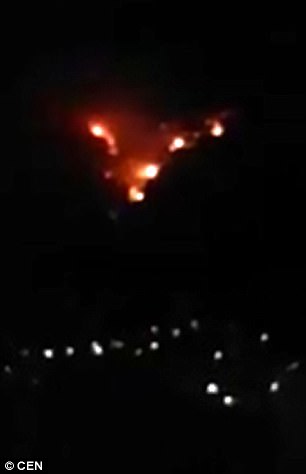 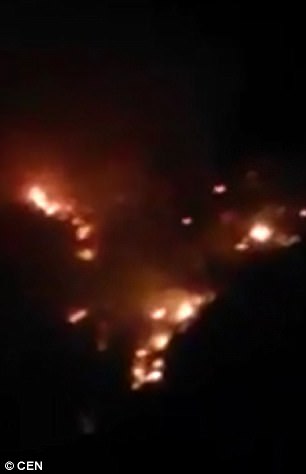 Out of control: However, the fire soon got out of control, and a huge blaze – seen in a video recorded by an eyewitness – is now ravaging the forests near the Montenegrin coast

‘The situation is extremely serious, because at this moment it all depends on the wind, it could not only endanger the upper parts of Susanj, but on the side of the hill is Sutomore, and on the other side is Zubac.’

Mr Cadzenovic added that he would seek immediate help from Croatian firefighting planes, as well as available Montenegrin police aircraft.

He said: ‘We immediately started making plans of action for tomorrow at dawn. At this moment, the fire is still far from the road, however, due to the possible development of the situation, we have to be most careful.’

The missing Polish tourist has not yet been found. It is believed that he used his mobile phone to ring for help and lit a fire in the hope that rescuers would see the smoke.

The fire has spread into a triangle of flame covering part of a hill and is clearly visible from practically all parts of Bar.

Susanj is famous for its beaches while Bar is an ancient city and port which is famously home to what is believed to be the world’s oldest olive tree which is between 2,000 and 2,500 years old.