Tourist is tied up and raped in a park in Rome

The mayor of Rome has labelled this month ‘a black September’ for Italy  after a tourist was tied up and raped in a park following a spate of other sex attacks.

A German woman was robbed before being bound and assaulted in the Villa Borghese park, in the north of Rome.

In the same 24-hour period, a doctor working alone on a night shift in a tiny clinic in Catania was reportedly raped for hours by a patient.

A German woman was robbed before being bound and assaulted in the Villa Borghese park , in the north of Rome

Italian officials have called for increased police patrols, video surveillance and tougher laws to punish perpetrators after a spate of rapes renewed attention on violence against women.

Rome mayor Virginia Raggi called for increased police patrols and video surveillance, declaring it had been ‘a black September for Italy.’

The anti-immigrant Northern League seized on the attacks to call for the chemical castration of rapists.

This week’s rapes followed a case in Florence where two American students said two Carabinieri paramilitary police officers raped them after offering them a ride home from a disco. 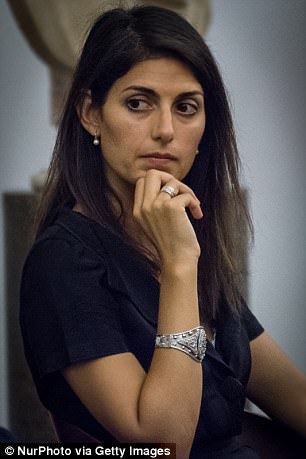 The officers have been suspended pending the investigation.

And in August, a Polish tourist was gang raped and her partner beaten during an attack in the beach resort of Rimini.

This allegedly carried otu by the same group of men who assaulted a Peruvian woman just a short time later, with four people later arrested.

Italian politicians and activists have long denounced a culture of violence against women in Italy that frequently erupts in domestic assaults – sometimes fatal – by jealous husbands and boyfriends.

In the recent rapes, the perpetrators were not believed to have been well known to the victims.

In the case of the Catania doctor, the town mayor said the suspect was known to law enforcement.

Health Minister Beatrice Lorenzin ordered all overnight health clinics to check their security provisions, after the doctor was apparently unable to call for help after her attacker disabled her phone line and emergency alarm.