Tourists are being warned they could face fines of up to £900 if they take pebbles from a certain Greek beach.

Lalaria Beach in Skiathos, which is only accessible by boat, is extremely popular with holidaymakers, who have been known to fill their pockets with unique pebbles as free souvenirs.

But officials on the Greek island are worried that too many of the stones have been taken leading to a dramatic change in the landscape of the shoreline in the past 10 years.

The pebble-filled Lalaria Beach on the Greek island of Skiathos. Tourists are being warned they could face fines of up to £900 if they take pebbles home with them

And now they have introduced fines of between £360 and £900 for people who take pebbles without permission.

It has been reported that signs have been placed around the Lalaria beach telling tourists: ‘Take pictures, not pebbles.’

Posters have also been given to boat operators and fishermen in the area so the message can be spread across Greece.

Thodoris Tzoumas, from the Cultural Association in Skiathos, told the Athenian-Macedonian News Agency: ‘The rounded white pebbles we call ‘lalaria’ (from the ancient word las which means stone) are created only in the specific area, which is accessible only by sea.

‘In recent years, we have undertaken, in co-operation with the Skiathos Port Authority, an awareness campaign for the protection of the beach.’

Earlier this month, it was also reported that a man who took some pebbles from a Cornish beauty spot – Crackington Haven – found himself being hunted down by officials who demanded them back. 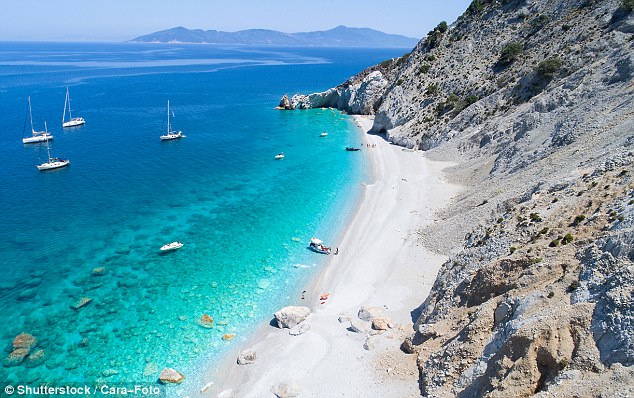 In the end he was forced to travel hundreds of miles to return them or face prosecution.

Visitors could be fined up to £1,000 because the removal of stones leaves the area exposed to erosion, St Gennys Parish Council said.

Critics, however, claim that signs put up to deter visitors from taking them spoil the beach and that the council’s approach is aggressive and heavy handed.