Some of Europe’s most cultural attractions are opening their doors to visitors once again as the continent creeps towards a return to normality following the coronavirus outbreak.

Dozens of nations have been forced into lockdown by the pandemic, and flight restrictions have had a huge impact on tourism across Europe.

The UK has seen significantly more positive cases and fatalities than its neighbours, but some of those countries are now also edging towards grim milestones.

France is rapidly approaching 30,000 deaths, having had more than 150,000 people test positive since the virus began to spread.

Figures elsewhere in the west of the continent, in places such as Austria, Belgium, Portugal and the Netherlands remain comparatively low.

As the number of new cases and deaths begins to plateau, many are taking steps to reopen some of their popular cultural hotspots – albeit, in many cases, with social distancing restrictions.

France’s Palace of Versailles, built in the 17th century by the ‘Sun King’ Louis XIV, throws its doors open to the public again today, but with little certainty over when tourists will return in larger numbers. 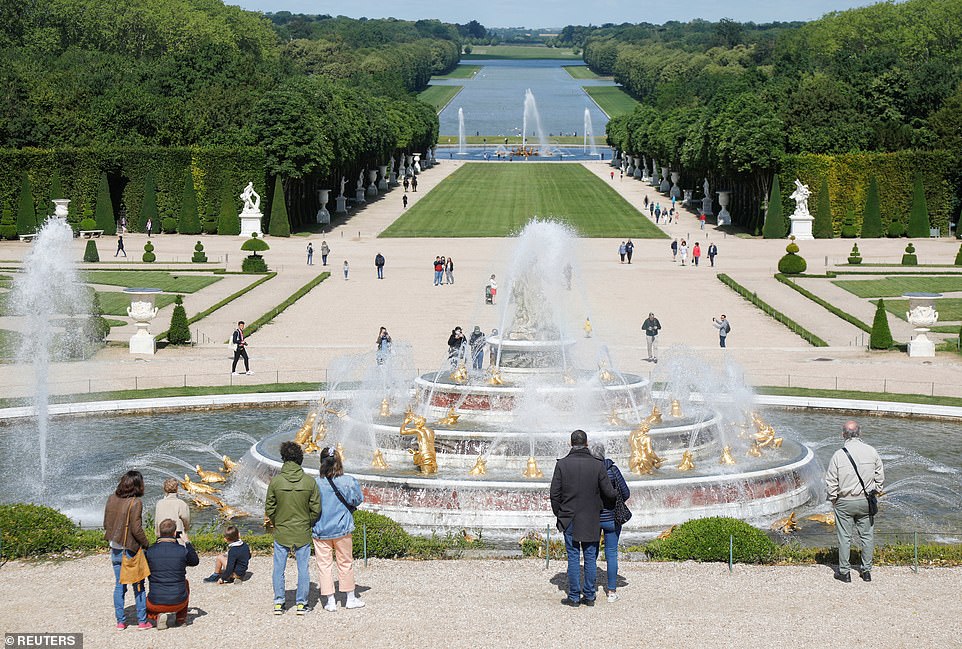 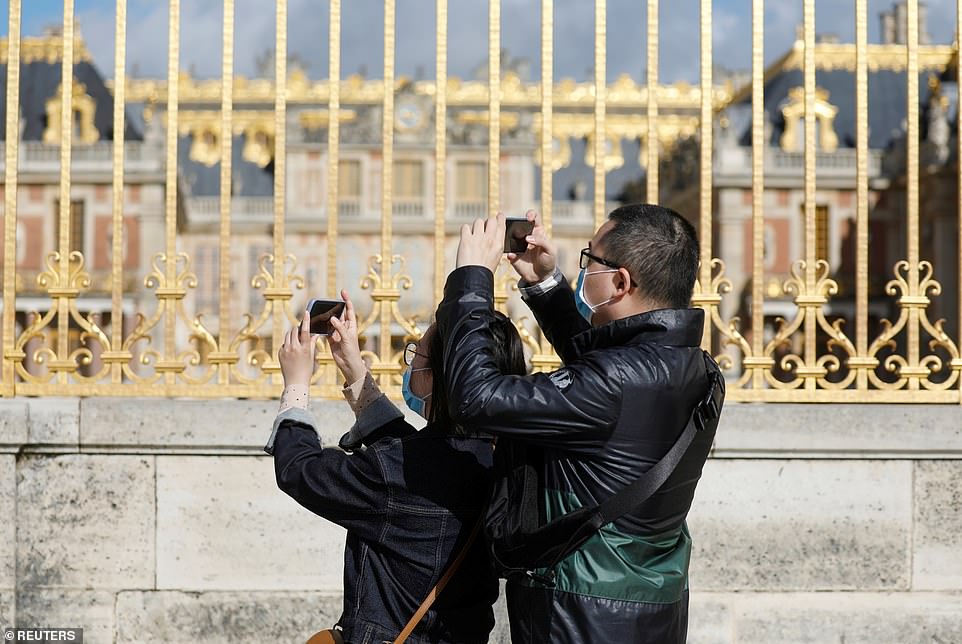 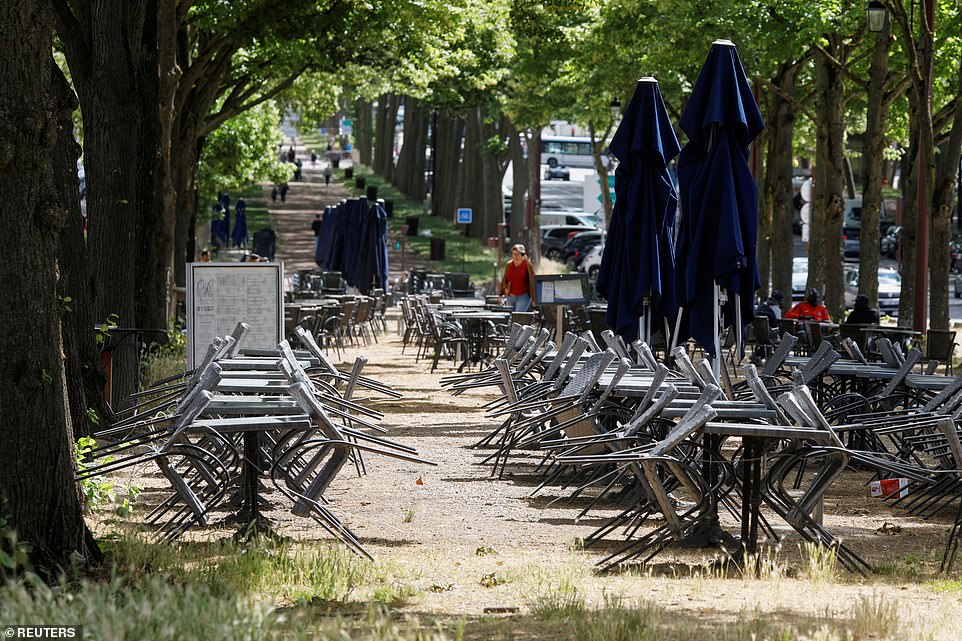 Empty chairs and tables of cafes and restaurants are pictured around the Chateau de Versailles today, despite it reopening 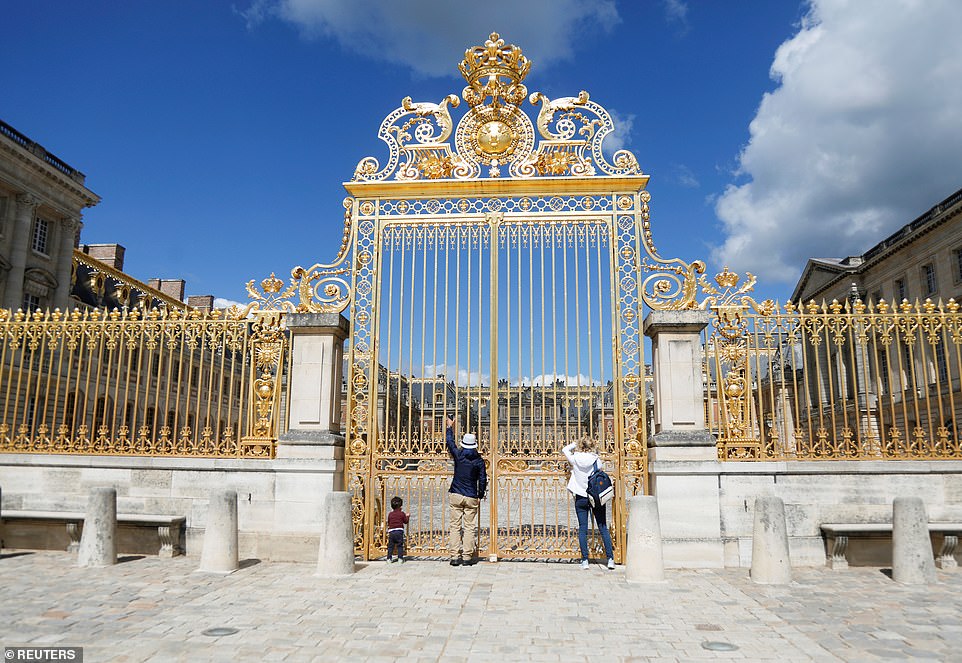 Visitors, including a young child, stand in the Cour d’honneur courtyard at the cultural landmark in France earlier today 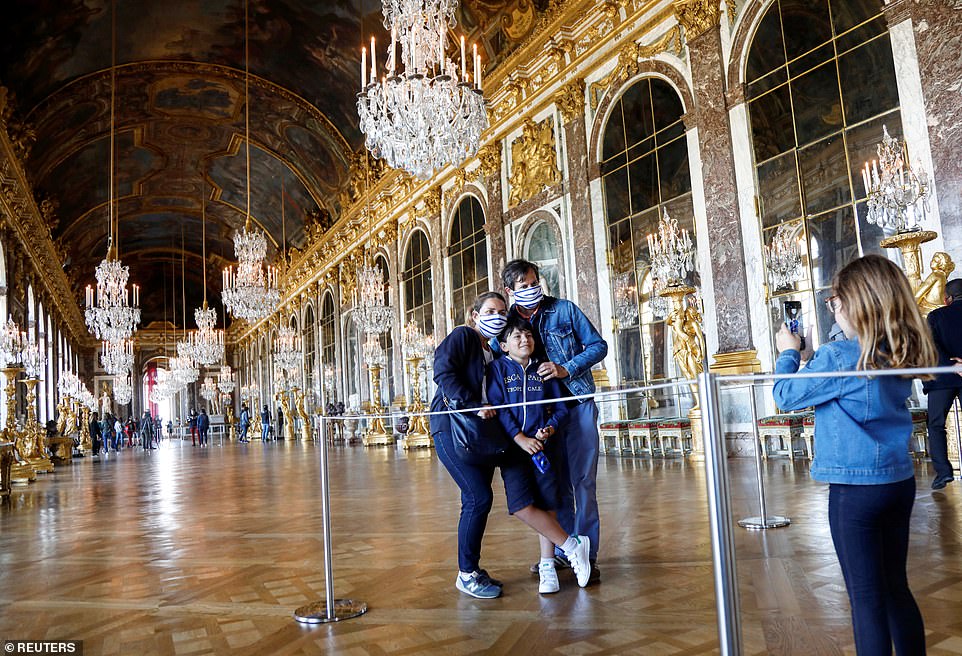 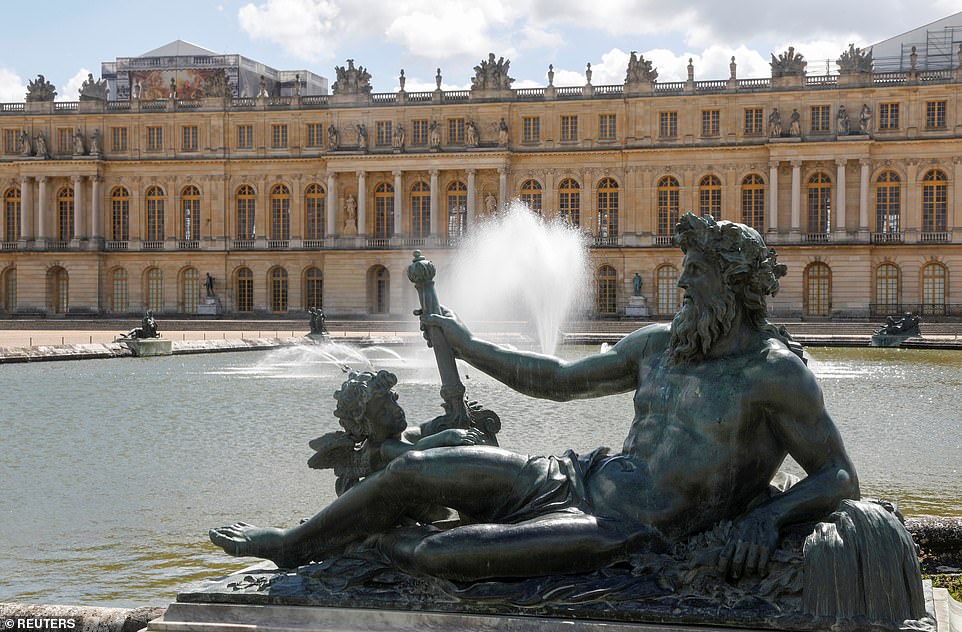 Louis XIV craved the palace, pictured today, as a symbol of France’s prominence as a European superpower and his perceived divine right to wield absolute power 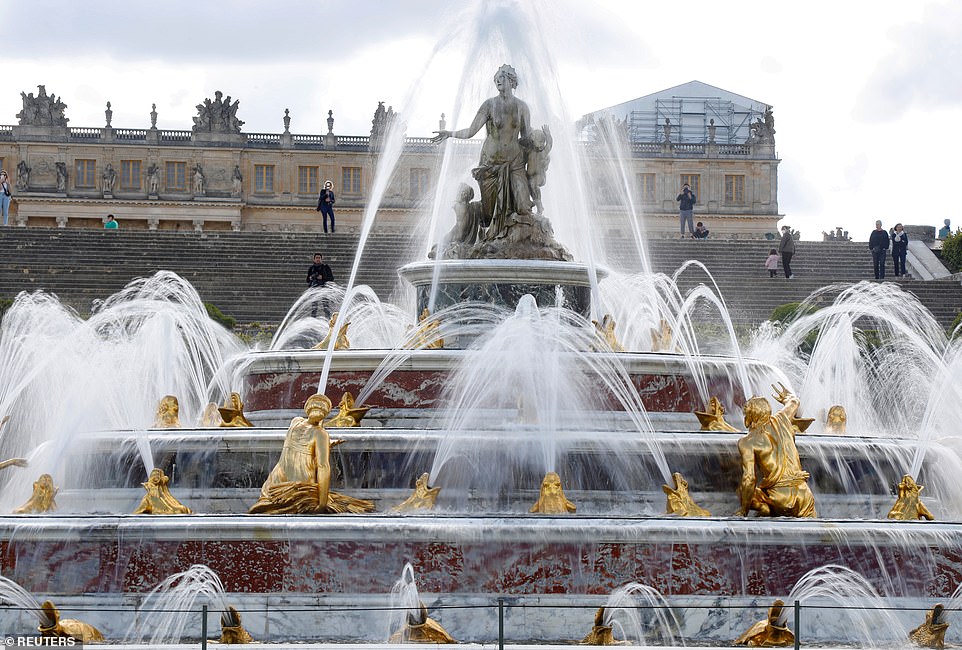 Workers yesterday dusted the Hall of Mirrors and polished its gilded statues ahead of the reopening, which requires visitors to wear face masks and follow a one-way route through the opulent 2,300-room complex.

The coronavirus crisis has dealt a heavy financial blow to the palace and France’s other leading cultural attractions.

Ticket sales to the eight million people who passed through the palace gates in 2019 made up 75 per cent of revenues. Four in every five visitors is foreign.

‘This financial model has been devastated. We have to start again,’ Catherine Pegard, who runs the palace, said.

Louis XIV craved the palace as a symbol of France’s prominence as a European superpower and his perceived divine right to wield absolute power.

It remained the principle royal residence until the French Revolution and the overthrow of the monarchy nearly eight decades after his death.

The palace is one of the most visited sites France, itself the world’s favourite tourist destination.

But as France emerges cautiously from lockdown – its borders remain closed to most outsiders – the palace anticipates only a fifth of the 20,000 visitors it used to host on peak days. Tickets must be bought in advance.

A roped walkway will guide visitors through the famed Hall of Mirrors, where Germany and the Allied Nations signed the treaty ending World War One, and the ornate King’s Grand Apartment.

‘We’ve cleaned the mirrors, dusted the chandeliers and the torches. Conditions are exceptional,’ Pegard said.

Elsewhere, Spanish visitors queued to enter the Prado museum in Madrid today, which reopened for 1,800 people for the first time since the outbreak.

The visitors were required to wear face masks and have their temperature taken before taking in what the museum called its ‘most iconic works’.

Meanwhile, the Vienna Philharmonic Orchestra performed in the Austrian capital’s Musikverein last night, although only 100 guests were allowed into the venue and were separated by empty seats to ensure social distancing.

In Switzerland, crowds queued up patiently to see the animals at Zoo Zurich which also reopened to the public today. 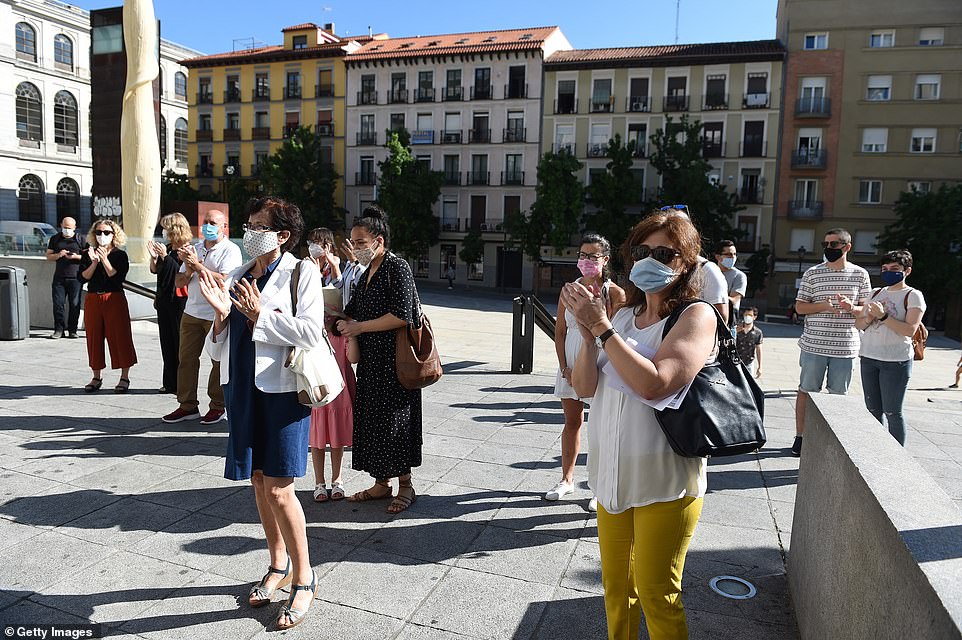 People in face masks applaud today as the Reina Sofia museum reopens its doors, after its closure in March due to the Covid-19 pandemic 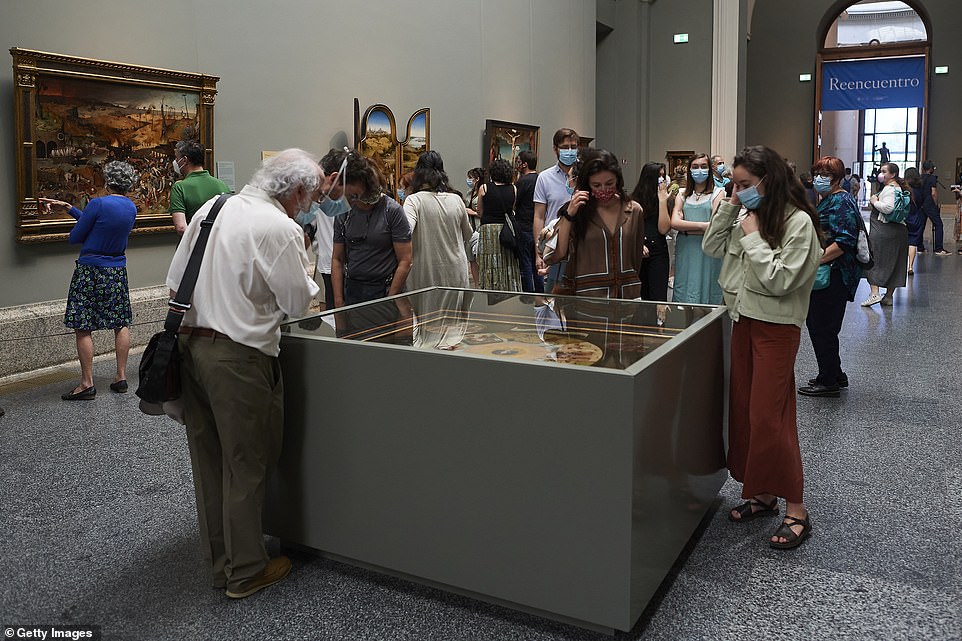 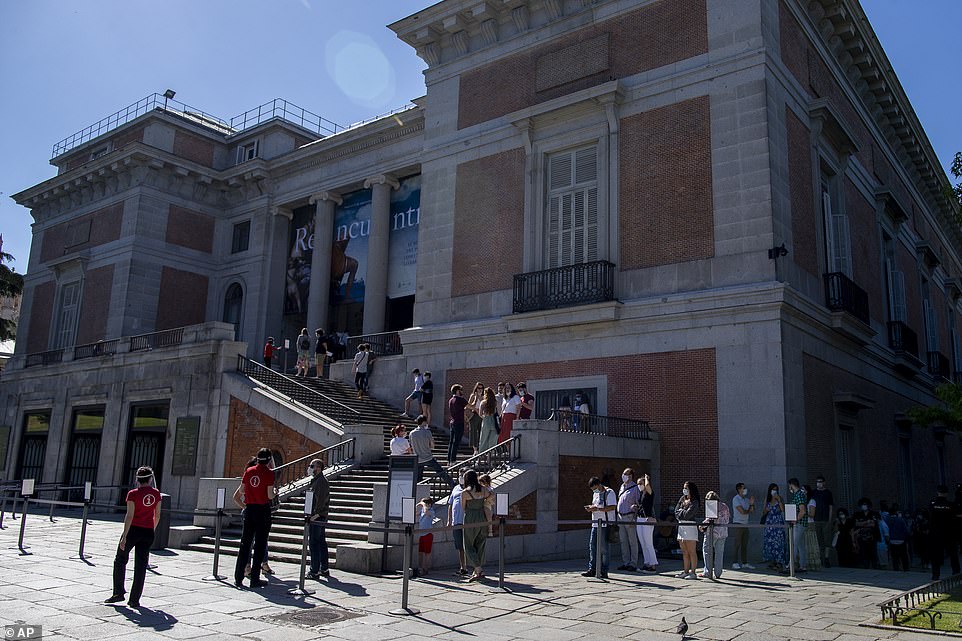 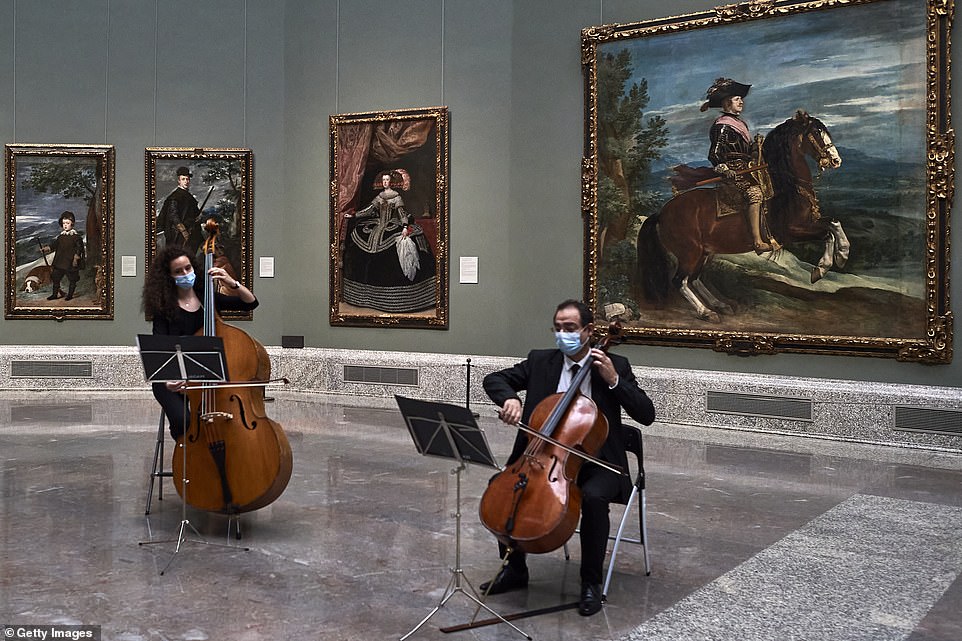 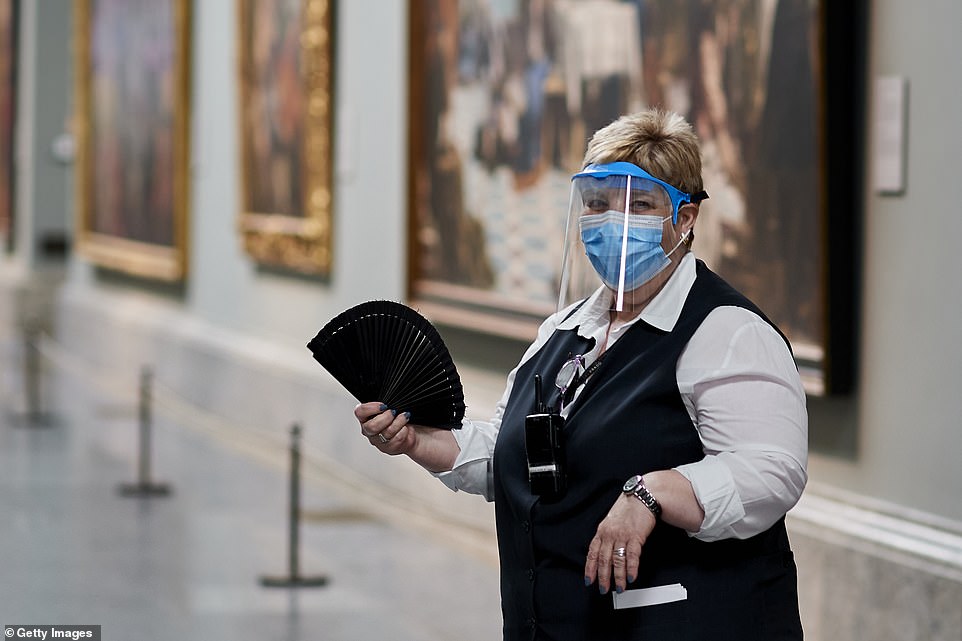 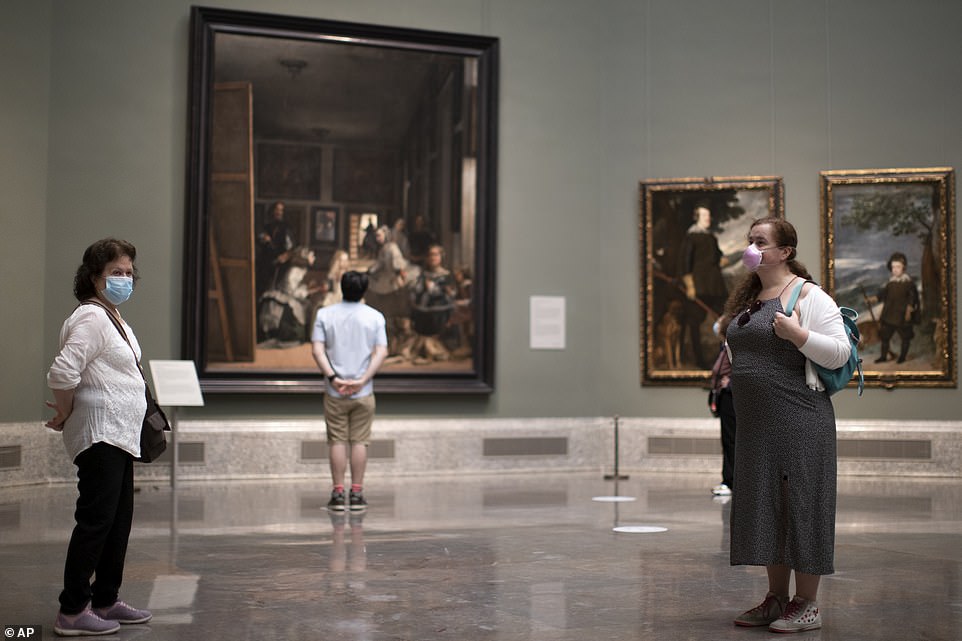 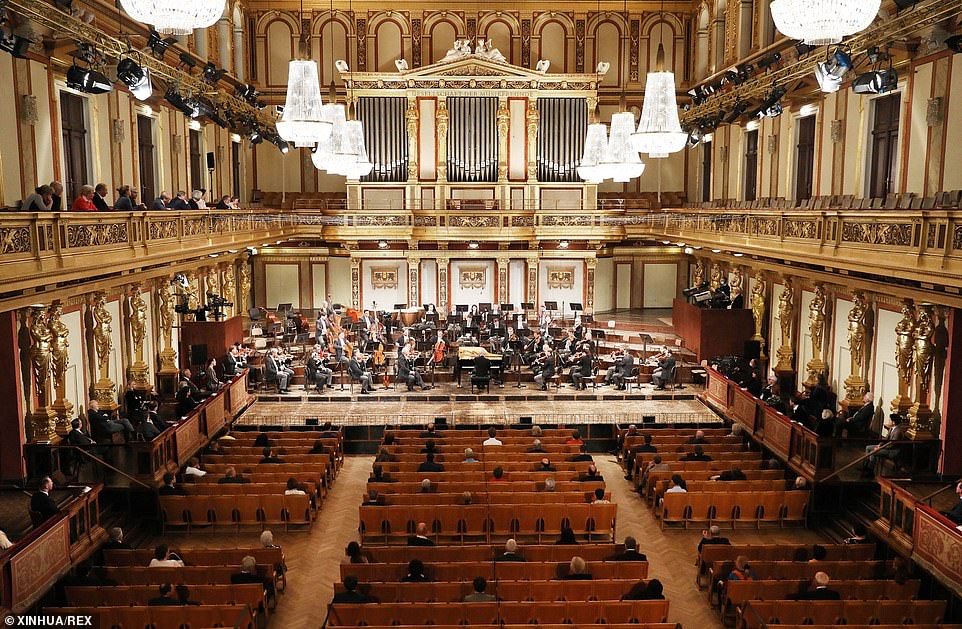 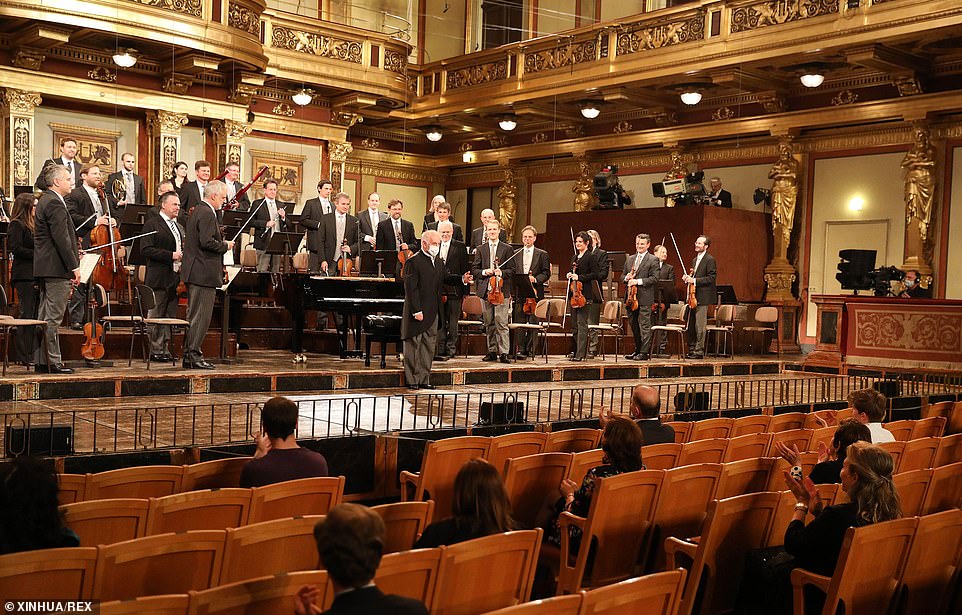 Some members of the orchestra wore face masks, pictured, after performing at the golden hall of Vienna’s Musikverein last night 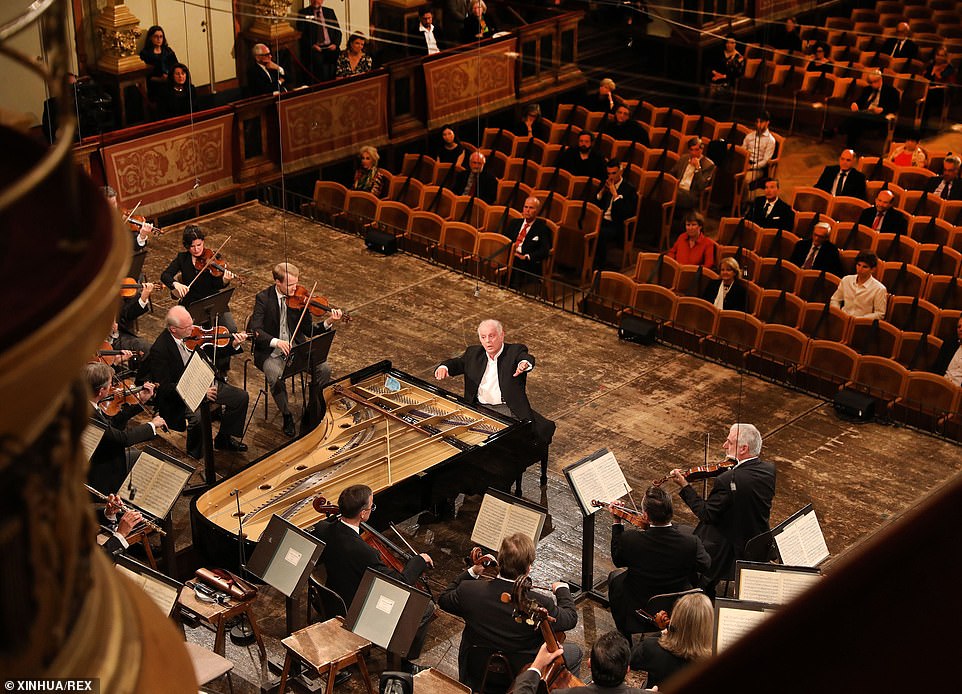 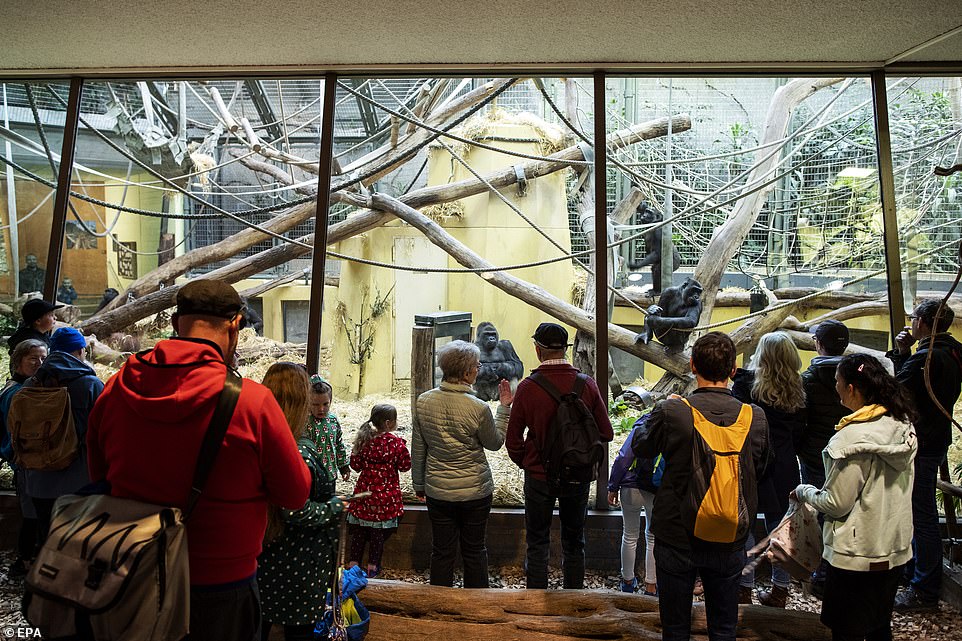 Visitors flocked to a zoo in Zurich, Switzerland today, pictured, which opened for the first time since the coronavirus outbreak 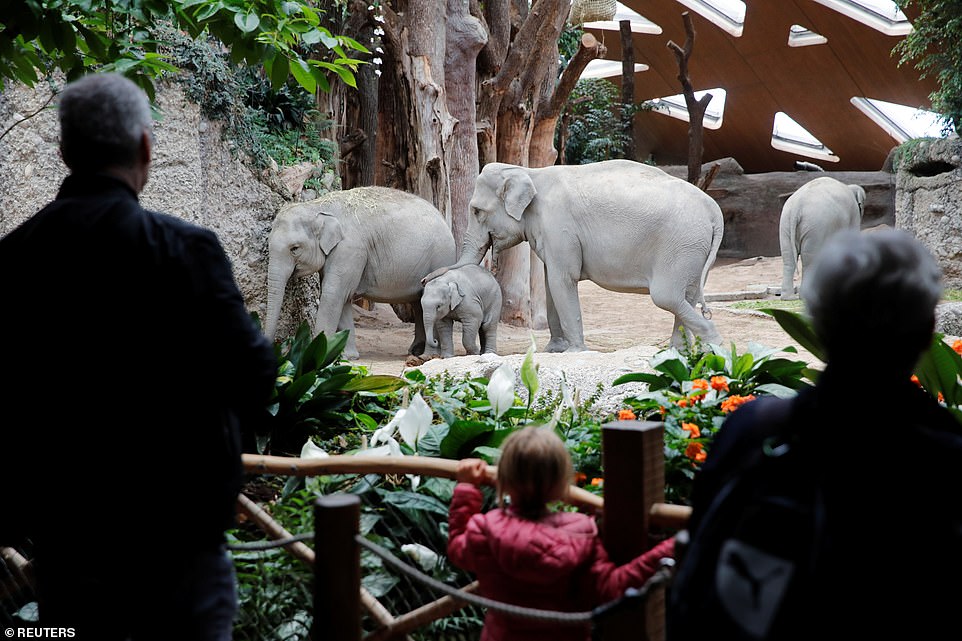 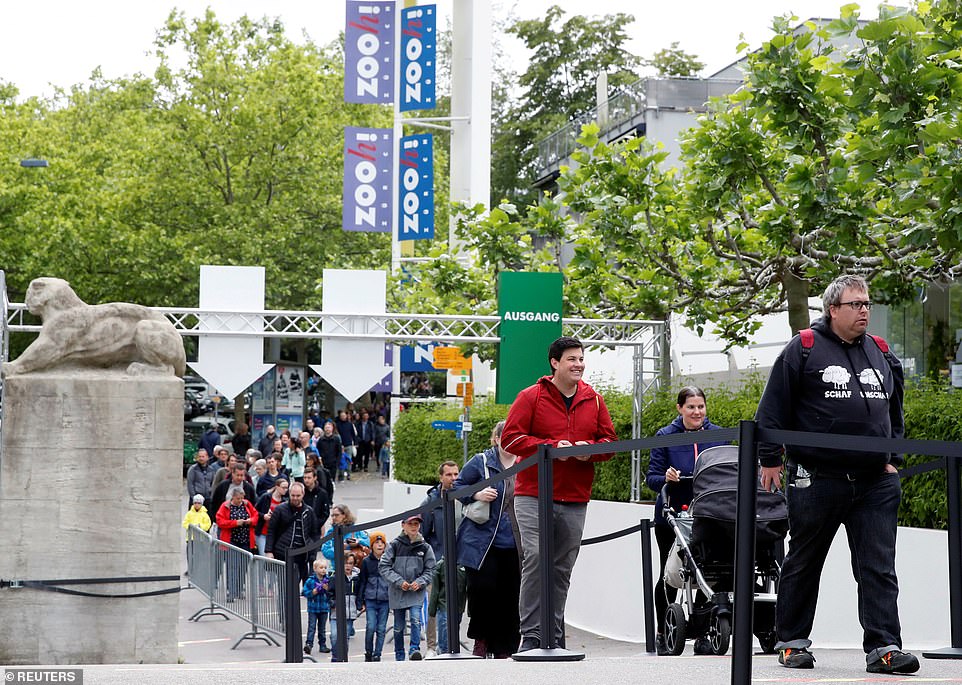