By Eve Buckland and Bryony Jewell For Mailonline

She is the TOWIE star who always puts on a glamorous display on social media.

And Amber Turner looked incredible as she flaunted her toned frame in a throwback snap from Dubai on Wednesday.

The blonde beauty, 27, wowed in a busty halterneck top which drew the eye to her ample cleavage and honed midriff.

Glow: Amber Turner looked incredible as she flaunted her toned frame in a throwback snap from Dubai on Wednesday

The star paired this with a black split skirt while boosting her height with stiletto sandals.

Her blonde tresses were styled sleek and straight while a rich palette of make-up enhanced her pretty features.

She captioned the snap: ‘I just wanna get dressed up & go for cocktails.’

Earlier this month Amber looked sensational as she flashed her washboard abs in a white crop top and bright blue leggings while working out at home in Essex on Saturday.

The star  also took to Instagram Stories to reflect on her past cosmetic treatments, admitting that she used to be ‘addicted’ to lip filler. 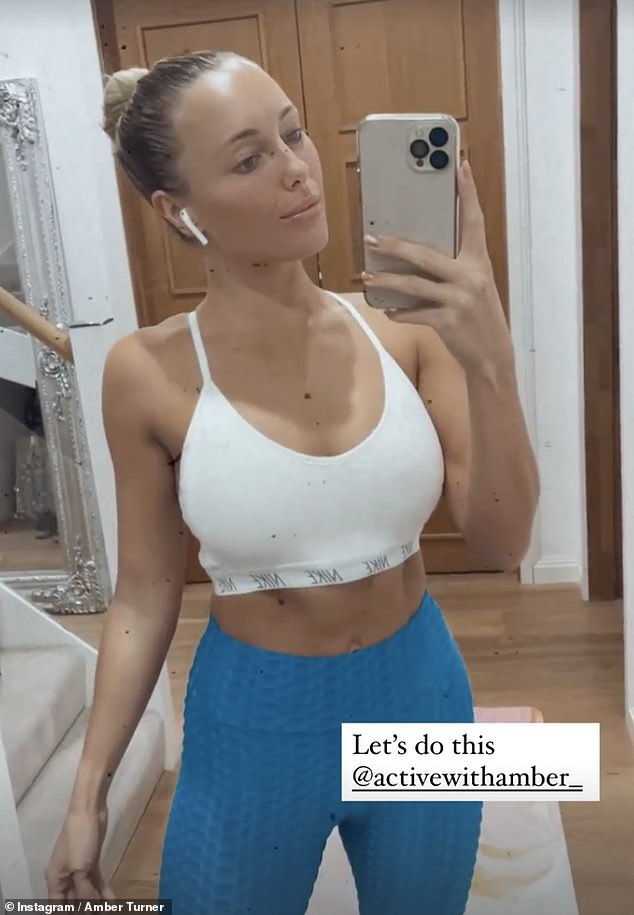 Looking good: Earlier this month Amber looked sensational as she flashed her washboard abs in a white crop top and bright blue leggings while working out at home in Essex on Saturday

Amber looked every inch the fitness expert as she posed up a storm in a pair of fitted leggings and her Nike sports top ahead of one of her own workouts.

She slicked her blonde locks back into a bun to ensure nothing would get in the way of her exercise and donned some AirPods to provide the tunes.

Ahead of getting her swear on, Amber reflected on her former lip filler days telling her 826K followers that she’s now gone more than a year without getting any.

Sharing a close up of her face, Amber penned: ‘Haven’t had my lips done since 19th Dec 2019! I swear I was addicted – anyone who knows me knows lip filler never lasted and I used to get like 1ml every 2/3 months lol! Feel like I prefer them like this tho!’ 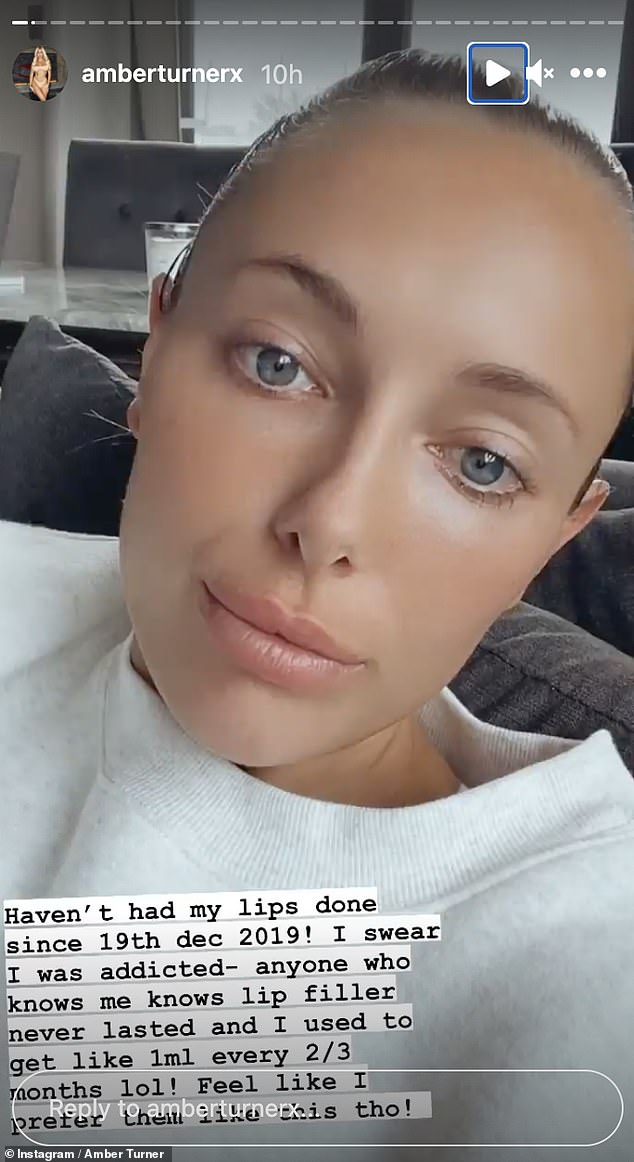 Changing her look: The TOWIE star also admitted that she used to be ‘addicted’ to lip filler

Amber has been sharing a selection of sizzling fitness snaps over recent weeks and recently flaunted her body overhaul as she posted an amazing before and after shot.

The blonde beauty posed in the same grey Calvin Klein lingerie set for the two images, which showed off the results of her gruelling hard work.

However it came after she hit out at trolls who accused her of being ‘damaging’ after she showed off her breakfast and lunch. 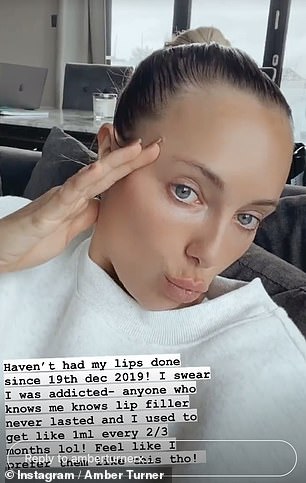 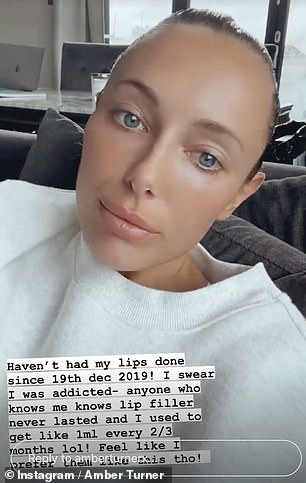 Stunning: She explained how it’s now been more than a year since she had any filler, adding that she prefers her current appearance (pictured on Saturday) 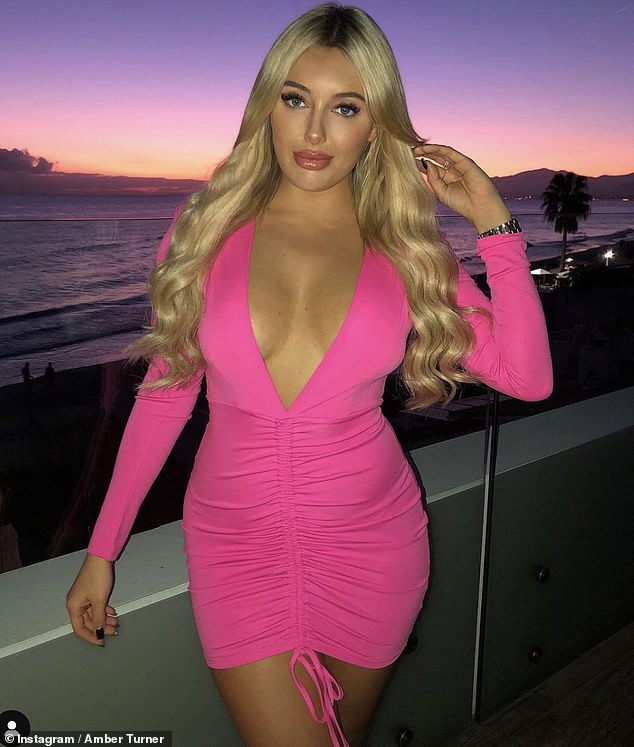 Throwback: Amber said she’s not had any filler since December 2019 (pictured that month) 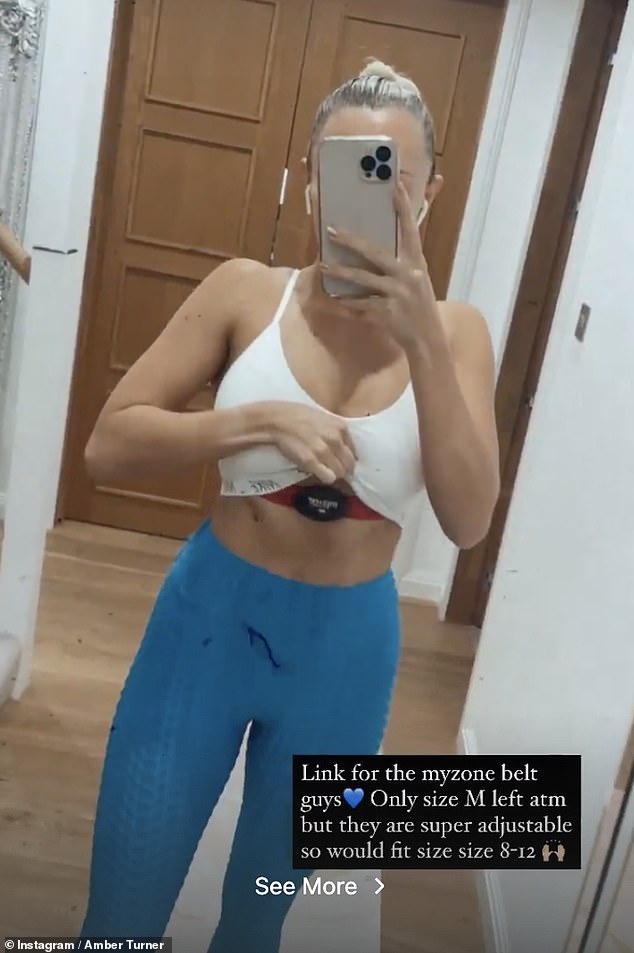 Toned: Amber recently returned home from a ‘business’ trip to Dubai with her boyfriend Dan Edgar and has been sharing regular updates of her workouts

The social media star shared a picture of her combined meal which comprised of five slices of red pepper, chicken breast and a kiwi smoothie with her fans.

She was left irked when she was inundated with ‘rude’ messages from Instagram users, who claimed she skipped meals and insisted she isn’t eating enough.

She wrote: ‘Ok so I don’t usually respond to people sending me rude messages but it’s actually really got on my nerves so here goes! 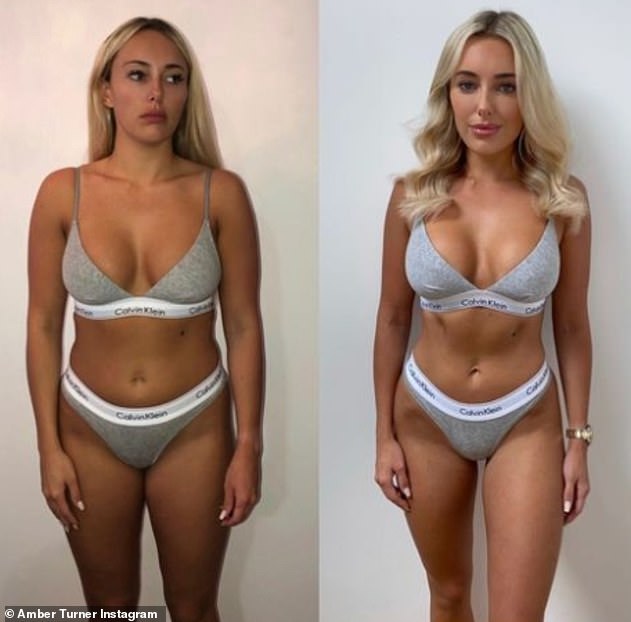 Hot stuff! The reality star flaunted the results of her body overhaul as she posted an amazing before and after shot last Monday

‘I used 180g of chicken and a large pepper. My plate was a big dinner plate which makes it look small. But I can assure you it’s not! When I said breakfast and lunch all in 1, I never meant to eat less/ skip a meal! I meant it literally.’

The reality star explained she would sometimes have a protein smoothie for breakfast, then workout and have lunch later.

She continued: ‘That’s only 3 hours 55mins after being awake. If I woke up at 7am and was eating chicken and a smoothie and 11.30am would you be messaging me abuse saying what I’m doing is “damaging” no!

‘It’s so pathetic and has actually really annoyed me! Leave me be!! And thanks to all the lovely people who message me saying they love my boring plain food.’ 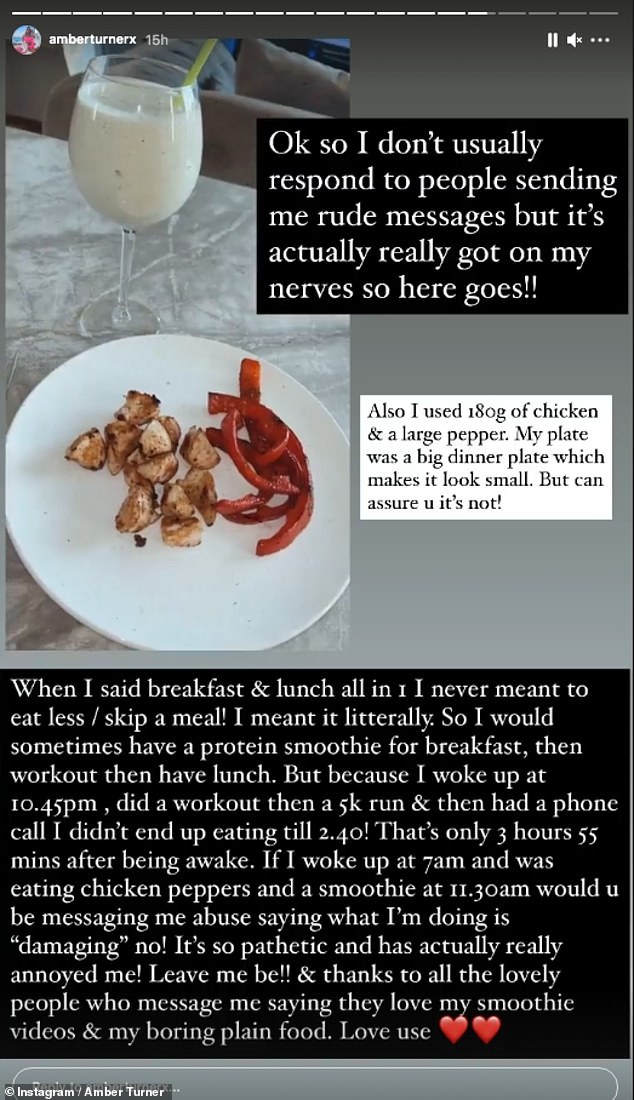 ‘Leave me be!’ Amber recently hit out at trolls who accused her of being ‘damaging’ after she showed off her breakfast and lunch