One of Britain’s biggest town centres has been so badly affected by shop closures that some women say they ‘can’t even find anywhere to buy a bra’.

The astonishing claim in Wigan follows the closure of shops including a Marks and Spencer, Debenhams, BHS, H&M and Next in recent years.

High streets up and down the country have been hit by a toxic combination of spiralling rents and business rates, internet competition – and claims of corporate greed leading to store closures.

Wigan’s major shopping centre, The Grand Arcade, only opened in 2007, is half empty, while a second centre is closed entirely, awaiting a £130m redevelopment

Wigan also suffers due to its close proximity to Manchester and Liverpool city centres and the out-of-town Trafford Centre.

Just one small ladies’ boutique remains in the Greater Manchester town, specialising in smart outerwear and party garments. The other option, Primark, is, locals say, ‘for the young ones’.

The major shopping centre, the Grand Arcade, opened in 2007, but is half empty, while a second centre is closed entirely, awaiting a £130million redevelopment.

The fate of the town – famed for pies, Northern Soul music and rugby league, and which has streets filled with historic buildings – was highlighted in a recent post on the Mumsnet social media site.

She added: ‘These have been replaced by pop-up eyebrow/lashes salons, fast food joints, pound shops, phone-unlocking shops, Cash Converter-type shops, Primark (its only remaining clothes store), Iceland. The rest is boarded up.’

The woman continued: ‘I can’t understand how it got so bad. Why did everything just die? It was previously so bl**dy alive’.

The post was commented on more than 400 times, with people sharing woes about high streets up and down the country and calling for action on parking charges, business rates and making internet retailers pay fair taxes.

In Wigan, Janet Dickinson, who runs Lady Designer Wear, the town centre’s last women’s boutique, said: ‘There are ladies coming in here saying they can’t even get a bra.’ 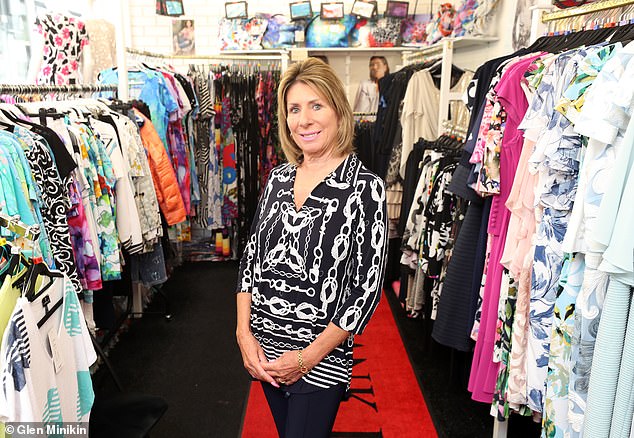 ‘Just for the young ones’: Lady Designer Wear owner Janet Dickinson (left) says the closures have taken a heavy toll on older shoppers

Primark, her customers tell her, is just ‘for the young ones’. She added: ‘The chains are all pulling out and we have no supermarket – those in the town centre all closed. We still have a lot of banks but they are doing limited hours.

‘The Post Office moved into WH Smith but that closed. Now it’s in a small unit and unless you knew it was there, you wouldn’t know where to find it.’

The 63-year-old, who has had her brightly-coloured shop in the Royal Arcade for 26 years, said she has survived thanks to online sales, adding: ‘I don’t know what the answer is. If they made parking free, it would attract more people but there needs to be something to come here for.’

Neil Pyke, 54, owner of Kath’s Haberdashery shop, said: ‘The town needs a lift. If it keeps on the way it’s going it will die on its feet.’

He was optimistic about redevelopment plans which have seen the closure of the Galleries shopping centre.

The centre and outdoor market – opened by Princess Diana in 1991 – are to be replaced with flats, restaurants, a hotel and cinema. Just four stalls remain at the market. He said: ‘Flats in town will mean more people shopping.’

Issues such as high business rates prompted the exodus of chains, several of which are now at Robin Park, next to the rugby and football stadium, he said.

He said some small restaurants do exist but the new developments could bring larger, upmarket ones and some chains. 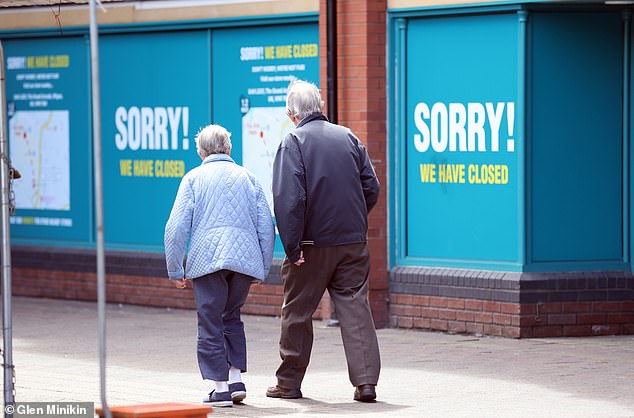 Competition: Wigan suffers due to its close proximity to Manchester and Liverpool city centres and the out-of-town Trafford Centre

Jeweller Bill Allan, who moved to the Victorian Makinson Arcade after losing his Manchester premises in the 1996 IRA bombing, defended the town, saying: ‘Although the chains have moved out there are still plenty of independent shops.

‘My big argument with the council is the lack of communication with businesses and there needs to be improvements for older shoppers. There’s nowhere to sit and no public toilets.’

He said: ‘People have avoided town centres like the plague and business rates and taxes have definitely been a factor. It makes me very sad.’

Anne Jennion, 73, said: ‘There’s nothing here now. The only shops are for young ones.’

Aidan Thatcher, Wigan Council’s director for growth and economy, said: ‘We are investing significantly in the redevelopment of The Galleries and the wider town centre.’

The council added it was making efforts to market the town, including at a national property conference last month, and provides free parking at weekends.

Meanwhile, a £1.3million Government-funded project will see King Street, home to the town’s Royal Court Theatre, bars and nightclubs, improved to make the most of its beautiful historic buildings.

Wigan’s Labour MP Lisa Nandy, shadow Levelling Up secretary, believes austerity is partly to blame, with the council having faced ‘the third worst cuts of any local authority in the country’.

She said: ‘We have amazing businesses, a good council and incredible people who have done amazing things in spite of all the Government has thrown at us, but we could do so much more with a Government that matched our ambition and was prepared to back us.’

But a spokesman for the Department for Levelling Up, Housing and Communities, said Wigan is receiving grants, including £16million for The Galleries scheme, and is eligible for the second round of grants from the Government’s £4.8billion Levelling Up fund.

High street businesses have a temporary 50 per cent cut in business rates this financial year, it said.

A spokesman added: ‘Our Levelling Up and Regeneration Bill, which is going through Parliament, will kickstart the regeneration of town centres in every corner of the UK, helping local leaders ensure empty properties and vacant shops are filled, providing new hubs for local businesses and community groups.’