Emotional reactions to infidelity are generally predictable. What happens in the bedroom after the discovery of an affair is not.

The impact of cheating on sex is always dramatic but can run from one extreme to another: no sex or more than you’ve ever had.

While no couple are the same and all reactions are normal, there are many ways sex is impacted when infidelity appears on the doorstep.

The most common, as you can imagine, is that…

The thought of having sex is unthinkable

Let me state the obvious: affairs are painful.

Emotional instability, sleeplessness, angry arguments, uncontrollable sobbing, extreme anger or intense sadness, feeling like you won’t survive the pain, confusion, bewilderment, hatred and fear of being left and alone – these are just some of the emotions people experience after the discovery of an affair.

Not surprisingly, for most, the idea of having sex is unthinkable. You can’t bear the thought of your partner touching you, let alone intimately.

‘I wanted to have sex with him but every time he touched me, I saw his hands touching her,’ one young woman told me. ‘She was in bed with us. I couldn’t do it – it caused me so much distress to even try. He did this to us and we were as tight as thieves. How could I ever have sex with him again?’ 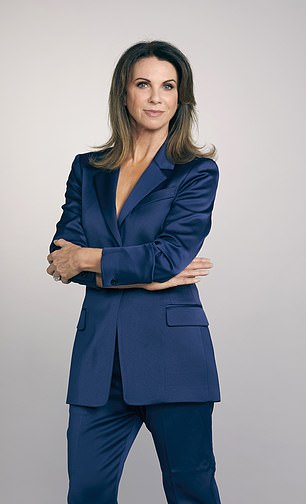 Tracey says that while the most common reaction is to withdraw sex from the cheating partner, some couples cling on tighter than ever before

Sex requires vulnerability. Why would you let yourself be vulnerable with someone who has hurt you so badly?

Besides, if you resume having sex again, your partner will think everything is OK and they’ve been forgiven. At the peak of our pain, we’d burn our partners at the stake if we could. Sex is withheld as punishment.

It all feels so unfair

‘We had problems but sex wasn’t one of them,’ a 31-year-old woman told me, after finding out her husband of five years had been cheating for over a year. ‘We were having loads of fun sex the whole time he was playing away. It made it worse: if that’s what happens when our sex is good, what the hell is going to happen when it’s not? What more could he want? It took months of counselling before I could hug or kiss him on the cheek. We’re together and have resumed having sex but it still feels tainted.’

It’s normal for sex to feel unsafe after infidelity: security and trust are gone and your sexual self-esteem is in shreds (If you were a great lover or had a perfect body, your partner wouldn’t have cheated, surely?).

There’s also a physical risk. If your partner didn’t practise safe sex, you could be exposed to an STI. Catching it would be the final nail in the coffin.

Whether you’ve been unfaithful or exposed a cheating partner, Tracey reveals how to move on after an affair

Every couple deals with an affair differently, but certain things help everyone.

IF THEY HAD THE AFFAIR

Don’t make any long-term decisions at the start. Don’t do anything that you can’t undo at this point.

It’s normal to feel overwhelmed with grief. You are grieving the end of a relationship you trusted and the rosy future you thought you had.

Others will judge but it’s up to YOU – and you only – whether to stay or leave. You’re not ‘weak’ if you don’t chuck them out. It takes more courage and backbone to stay.

Cover yourself with a blanket of love from friends and family and do things that give you joy.

Don’t ask for sordid details. It really doesn’t help. Skip the ‘I bet they were sexier/had a great body/better in bed than me’ and instead ask ‘investigative’ questions like ‘What did the affair mean to you?’.

Even if the affair wasn’t about sex, it feels like it’s about sex because sex is the most intimate thing you do with your partner. Sex can be the Achilles Heel of an otherwise strong relationship. Going forward, make sure yours is the best it can be.

At some point, sex has to become part of your relationship again or you will forever just be friends. Have brutally honest conversations about what you both want sexually and don’t be scared to criticise your old selves. This is a new relationship, make new rules!

Take baby steps. You will feel angry when you first become intimate. The ghost of the other person is there for both of you: time and patience are the only things that work to drive them out of your bed and your head.

Start by simply cuddling, progress from there. Don’t give up even if lots of sessions end with you storming off or in tears. The Sensate Focus program (search online for details) helps and don’t forget after-play, too. Cuddle, chat, lie there together. It’s just as important.

Don’t use the affair to win every argument. Even if you can and even though it’s bloody tempting, years and years later.

Recovery is not a straight line. One day you’ll think you’re through it, both laughing and swigging back wine like you used to, the next you remember, and are thrown back into the bitterness of day one of discovery with a force that knocks you over again.

IF YOU HAD THE AFFAIR

Admit that you caused all the pain. Because you really did. Even if you think your partner drove you to it, you must acknowledge the pain it’s caused.

Make your partner feel safe: you’re here with them now. You know you hurt them badly and you’re truly sorry.

The lying does as much damage as the cheating. Honesty is the basis of all good relationships. It takes years to rebuild trust, if indeed it can be. Apart from social lies, you cannot lie about anything from here on.

Honesty is essential but tact even more so. Answering, ‘Was he better than me in bed?’ with ‘Yes. Amazing actually. I’d always wondered what it was like to sleep with a man with a really large penis,’ is not going to help matters. Saying, ‘It was someone new. The novelty made it exciting’ is easier to stomach.

Healing comes from small, daily acts of kindness, rather than grand gestures. Making a cup of tea. Saying ‘I love you’.

Your partner shouldn’t have to ask for information or reassurance. If you cheated with someone from work, come home and immediately let them know if you had contact with the person. How you felt nothing, how they have nothing to worry about.

Show it hurt you, as well as them. Even if the affair was exciting, hurting someone you love is awful to witness – especially when you know you caused it.

You can have the best sex of your lives

But while lots of couples decamp to opposite sides of the house after cheating is discovered, others do the opposite and cling on tight.

‘My partner had a text affair with an old friend,’ a 42-year-old woman told me. ‘He got a little bit of attention from another woman and he thought it was OK to pursue it. I found out and it stopped. It did affect our sex life but in a better way. He desired me more, not less – it was the thought that he could have lost me. I felt confused at the time but I did feel desired which gave me my confidence back.’

Lots of couples find they have more sex with each other post affair than ever before – passionate, intense sex.

Even if you hate yourself for having wild, fantastic sex – you don’t want your partner to think you’ve forgiven them – it happens.

There are several reasons why.

First, you desperately want to connect because you’re terrified you’ll lose each other.

Second, primal ‘mate guarding’ kicks in: you want to lay claim to what’s yours.

Third, the affair creates distance between you – and distance fuels desire. It’s the close couples that experience desire problems. Who is this person? You thought you knew your partner, but you don’t. Desire is reborn because you’re effectively sleeping with a new person and our bodies love novelty.

We want what others want

You also see your partner through the other person’s eyes. When someone else wants what we have, things become far more attractive: you appreciate what you didn’t before.

‘I reacted in a primitive, animalistic way,’ one man confessed, after finding out his wife had been sleeping with a colleague for two years. ‘My wife was a placid woman, a little boring perhaps. Knowing she’d cheated, that she’d had the guts to do that, made her much sexier. We had wild sex for months after she told me. She couldn’t get enough and neither could I. There was also the element of ‘This is mine’. I wasn’t sure if she’d stopped the affair so having lusty, dirty sex with her was getting back at him. She left me for him but the sex in that end period was the best of our marriage.’

Some people find themselves being more adventurous than they’ve ever been, hoping better sex will stop future betrayals.

Truth is, great sex and lots of it won’t heal your relationship.

Repairing the damage from an affair must include working on all areas of your lives together. On the other hand, it’s certainly not going to cause any harm. Sex can be an emotional bridge.

Affairs signal the end or a new beginning

Infidelity can snuff out a pettering, on-its-last-legs marriage in one sentence (I’ve got something I have to tell you). It can also jolt a lacklustre, indifferent one to full attention with the same few words.

‘My wife had me on the shortest leash you could imagine,’ one man tells me. ‘She was pathologically jealous and would fly off the handle at anything. We had lots of brilliant sex when we met but after a while, she would only have sex when she felt secure – which was never. I lived like that for twelve years, not going anywhere or doing anything that might upset her, and then turned 50 and thought: I’m living my life before it’s over.

The affair was part of that. It was with a work colleague and didn’t last long but my wife found out and it turned us around. The thing she feared the most – me being unfaithful – happened and she survived. She finally relaxed and we’ve rediscovered each other. Our sex is even better than it was at the start.’

Good things can come out of affairs – and the person who often ends up benefiting is the deceived partner.

‘You think I didn’t want more?’, is the common, thunderous reaction of the wronged party, says a world expert on infidelity, therapist Esther Perel.

Once the affair is exposed, you no longer have to pretend you’re completely satisfied and happy either with mediocre sex or zero attention.

If your partner is in the dog house, you get to call the shots.

You need both love and sex

In the aftermath of an affair, couples have the most honest, open conversations they’ve had in decades.

You need love and sex to survive: lots of affairs happen because while love grows, sex is allowed to wither and die.

It might be rude, but infidelity can be a wakeup call that reminds you relationships need nurturing and attention. That your partner won’t just hang around if you only feed them crumbs. That sex is important and they aren’t immune to other people’s charms.

In short, it can sometimes provide the kick up the a*** both of you needed.

There’s more information on coping after an affair on Tracey’s blog at traceycox.com and on her podcast, SexTok. Listen wherever you listen to your podcasts.