She suffered heartache and betrayal on Married At First Sight last year, when her ‘husband’ Dean Wells plotted a secret ‘affair’ with co-star Davina Rankin.

And Tracey Jewel has now given her searingly honest opinion of the latest crop of singletons looking for love on Channel Nine’s social experiment.

In an exclusive chat with Daily Mail Australia, the 36-year-old author revealed which romances she thinks will end in disaster, which couples could go the distance and who is just a ‘rude b***h’.

She said what? In an exclusive chat with Daily Mail Australia, Tracey Jewel has dished which MAFS couples she thinks will SPLIT, who’s on the show for fame and who’s just a ‘rude b***h’

Tracey was unimpressed with hunky tradesmen Sam, 26, ditching Elizabeth, 27, before their honeymoon to attend the funeral of his ex-girlfriend’s mother.

She even suggested that Sam’s so-called ‘ex’ could actually still be his girlfriend and that he perhaps should have applied for Love Island instead of Married At First Sight.

Tracey added: ‘Poor Lizzie doesn’t even get a fair shot! Sam should have gone to Love Island not New Zealand in my opinion – and on this occasion I hope Lizzie does a husband swap!’ 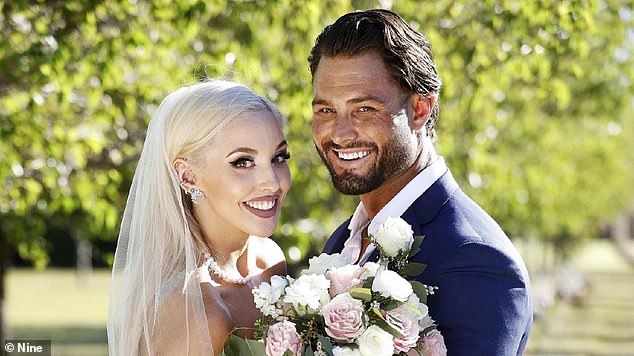 Claims: Tracey speculated that Sam’s ‘ex’ could actually still be his girlfriend and slammed him for ‘body-shaming’ Elizabeth – joking that she would eat all the KFC and Tims Tams around him to spite him

The mother-of-one also criticised Sam for ‘body-shaming’ Elizabeth, after he said she was ‘bigger’ than women he’d dated in the past.

‘Newsflash Sam: you ain’t that good looking! Funny how a guy body-shaming a girl and giving insincere apologies really makes someone so less attractive,’ Tracey said.

‘If I was matched with Sam I would be downing all the KFC and Tim Tams I could get to put up with him.’ 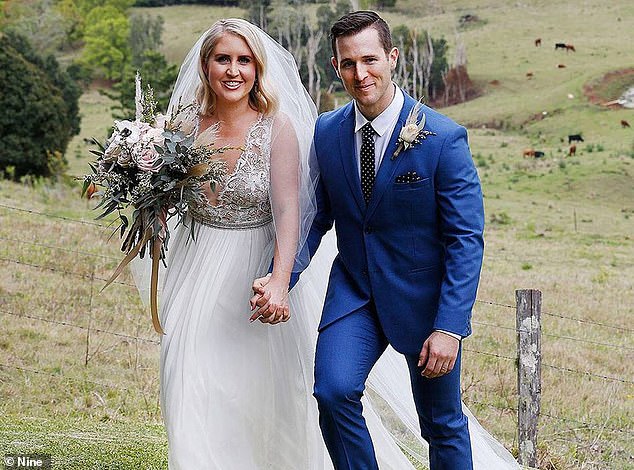 She said: ‘There’s nothing wrong with remaining a virgin until the age of 29 but sleeping with someone in an experiment in the first week… like Lizzie says, “I’m calling BS on that!”‘

Tracey believes the videographer may have lost his virginity far sooner than he claimed on the show, but added that there was ‘nothing wrong with living with your parents’. 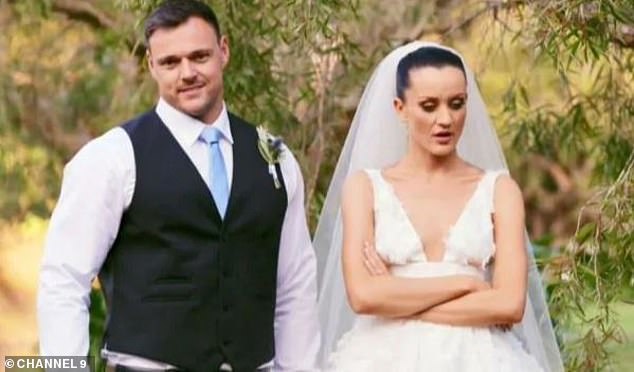 Not impressed: Tracey compared Ines to last year’s ‘villain’ Davina Rankin and branded her a ‘rude b***h’ after her foul-mouthed tirade to Bronson during a parasailing trip

Ines, 28, came under fire this week for yelling at former stripper Bronson, 34, to ‘shut the f**k up’ in a foul-mouthed tirade during a boat trip on their honeymoon.

And reflecting on the legal assistant’s meltdown, Tracey compared her to last year’s ‘villain’ Davina Rankin and branded her a ‘rude b***h’.

‘Oh dear God, is Ines the new Davina? I mean, everyone knows I didn’t have a lot of time for Davina,’ Tracey said.

‘I tried to talk sense into that woman but common sense didn’t prevail and Ines seems the same. Everyone has a past but there’s no need to be such a rude b***h.’

Tracey added that she thinks Ines has been put on the show purely to cause controversy and stir up trouble.

‘She should give the poor guy a chance, but it seems she was already a foot out the door before even walking down the aisle,’ she concluded. 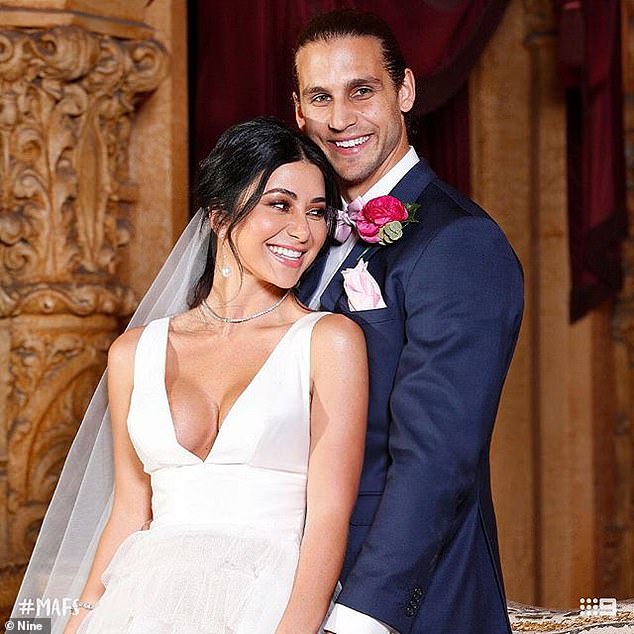 Sweet: Tracey said the couple are totally genuine – before admitting she hopes Martha’s numerous cosmetic improvements were done for her own self-esteem, not to fit in with the pressures of reality TV

Makeup artist Martha, 30, and PE teacher Michael, 27, have become fan favourites thanks to their sizzling chemistry – and Tracey thinks they are completely genuine.

‘I’m totally there for Martha and Michael,’ she said enthusiastically.

Tracey then addressed Martha’s numerous cosmetic enhancements, which include Botox, fillers, a nose job and a breast augmentation.

‘I think Michael reacted well to Martha opening up to what she has done,’ she said. ‘Cosmetic surgery is a personal choice that should be done because you want it, not for anyone else and definitely not for a show.’

Tracey admitted she went too far with her own fillers after succumbing to the pressures of being on reality television.

‘I went overboard thinking I needed to for TV and quickly regretted that watching myself back and got my filler reversed. I hope Martha is comfortable in her own skin and choices,’ she said. 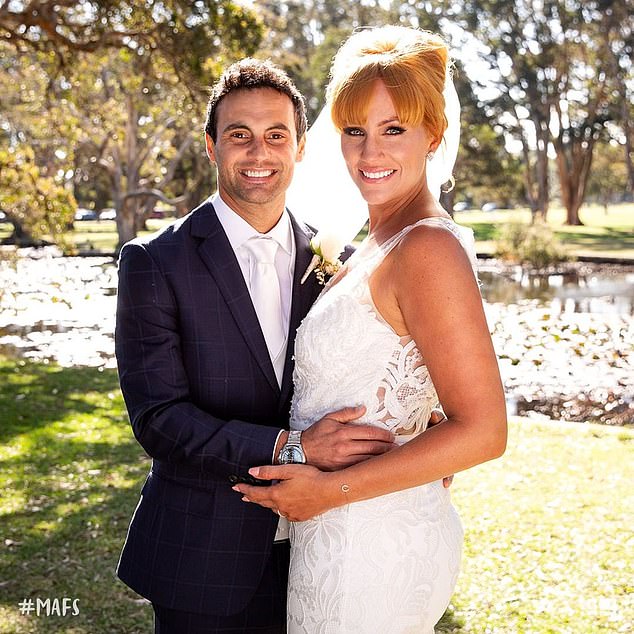 ‘There’s obviously a spark there’: Jules, 37, and Cameron, 34, can ‘last the distance out of all the couples, Tracey claimed

Jules, 37, and Cameron, 34, are this year’s version of Sarah Roza and Telv Williams, Tracey remarked.

‘It’s Sarah and Telv 2.0! I love these guys, there’s obviously a spark there,’ she added.

‘But that’s some heavy conversation for the honeymoon – I mean talking about babies? In front of the whole of Australia? It’s so personal, especially to pretty much a complete stranger.’

Tracey added cheekily: ‘If I did that with Dean, he’d have been running for the hills. I mean, he ran for the hills anyway!’

She predicted that having serious conversations early on will help them build a ‘really good foundation’, however.

‘I think it could make them grow closer and feel more connected. At least they’ve got a really good foundation to start their relationship with,’ she said.

‘I think Jules and Cam can last the distance out of all the couples. They look like the strongest.’ 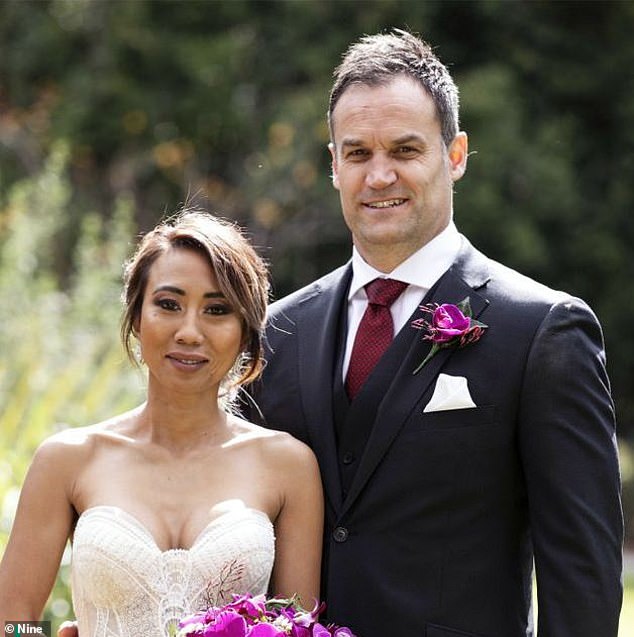 Too much? Discussing Ning’s stony behaviour, Tracey admitted: ‘I think Ning needs to lay off a bit. She came on really hard at the wedding and it’s only going to push him away’

As a single mother, Tracey said that she can relate to mother-of-three Ning, 33, and her struggle to open up about family to Mark, 41, so soon into the relationship.

‘I feel for Ning,’ Tracey admitted. ‘Being a single mother is really hard. I’m a single mother of one child, let alone three – that’s a lot to bring up in any relationship.

‘I brought it up with Dean on our wedding night that I had a child and he didn’t exactly react too well to that.’

She added that Mark, however, handled the bombshell ‘really well’.

Ning has been slammed by viewers after being openly unimpressed by her ex-army serviceman groom during their wedding, telling him coldly: ‘I’m just here for the food and the drinks.’

Discussing her stony behaviour, Tracey admitted: ‘I also think Ning needs to lay off a bit. She came on really hard at the wedding and it’s only going to push him away.

‘If you put up walls in this experiment you’re never going to be able to develop that connection and take things further.’ 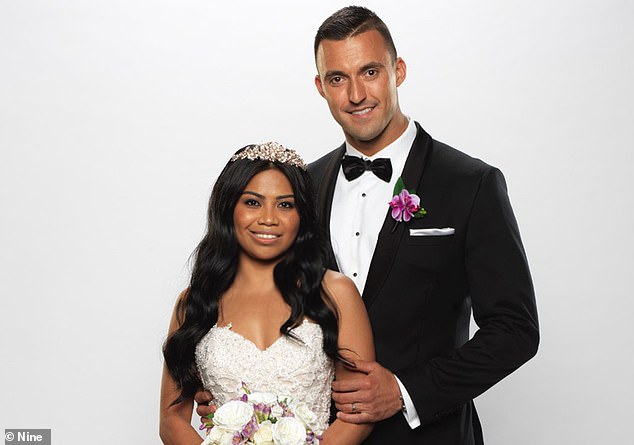 Remind you of anyone? Tracey compared Nic, 28, and Cyrell, 29, to last year’s Patrick Miller and Charlene Perera due to Cyrell’s ‘overbearing, possessive brother’

Discussing the couple’s longevity, Tracey added: ‘They seem to be getting along really well. I think it’s a slow burn.’

The motivational speaker added that Cyrell’s fiery personality isn’t so overbearing that it’s pushing Nic away.

‘Cyrell is a little rough around the edges but I think not too much to throw Nic off,’ she said.

‘I think she handled herself really well when Nic came up with her issues from the past.’ 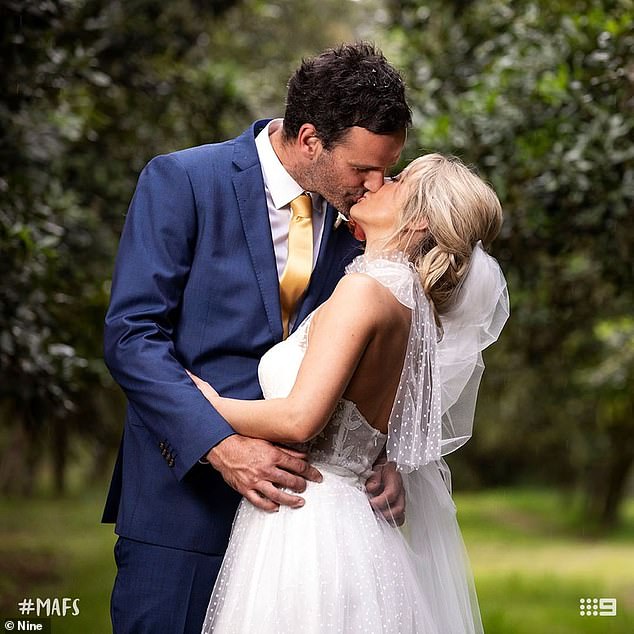 Sceptical: Part-time model Jessika, 26, is ‘fake’ and in the show to get ‘social media followers’ as opposed to finding lasting love with farmer Mick, Tracey claimed

Tracey claimed part-time model Jessika, 26, is ‘fake’ and in the show to get ‘social media followers’ as opposed to finding lasting love with farmer Mick.

‘What an interesting combination. This looks like a producer’s stitch up to me. I’m just calling it now she doesn’t even seem that interested in him,’ she claimed.

‘Mick’s obviously really trying and he seems really genuine. Yeah, he’s a bit rough around the edges, certainly not my cup of tea but I feel like she’s not even giving it a go and her fakeness is just rolling off the camera.’

Tracey added: ‘I think people are wizening up to reality TV and they can see who’s in there for social media followers and who’s authentic and looking for love.’

The reality star also claimed that Mick has sensed that Jessika could be there to boost her social media profile.

‘He’s right on the money – he called her out on it asking, “are you here for love, or are you here for Instagram likes?”and she got kind of defensive about it which makes me think maybe she’s chasing the fame,’ she said.

‘If that’s the case, maybe some couples swapping could go on. Jessika just smells of drama to me.’ 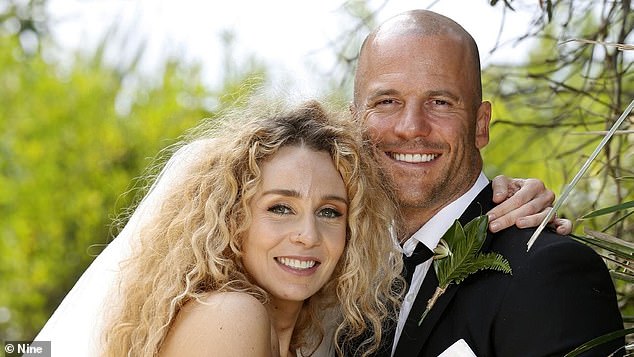 ‘I can just feel Heidi being gutted the way I was’: Jewel compared Heidi, 38, and electrician Mike, 44, to her own turbulent relationship with Dean Wells last year – claiming that Heidi is going to end up hurt

Jewel compared Heidi, 38, and electrician Mike, 44, to her own turbulent relationship with Dean Wells last year – claiming that Heidi is going to end up hurt.

‘I have to say it’s dean and Tracey 2.0. I can definitely see myself in Heidi, getting the rose-coloured glasses on and getting swept away with all the chemistry and feeling the butterflies. I can totally relate,’ she said.

‘And Mark is just like Dean, putting his foot in it, not realising what he’s saying, coming off the wrong way.’

Jewel predicted that their romance would end in heartbreak, remarking: ‘I can just feel Heidi being gutted the way I was.’

Commenting on this year’s series so far, the reality star anticipated that there will be plenty of couple-swapping and is ‘officially addicted’.

‘The producers have done a really good job. I can see there’s going to be some couple swapping, a lot of drama, hopefully some love and romantic gestures along the way,’ she said. 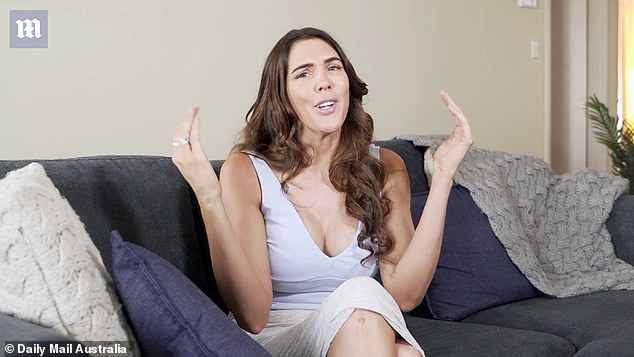 She’s hooked: Commenting on this year’s series so far, the reality star anticipated that there will be plenty of couple-swapping and is ‘officially addicted’