Track-and-trace staff have failed to reach half of people who have been in contact with Covid-19 patients in Blackburn – as the town hurtles towards a local lockdown.

Professor Dominic Harrison – public health director of Blackburn with Darwen Council – revealed the figures and warned of an ‘exponential growth’ of new infections if the system did not become more efficient.

Speaking to BBC Radio 4 he said the Lancashire area faces a ‘rising tide’ of infections.

‘The key issue here is that 40 per cent of people who are infected by someone with Covid-19 who goes for tests because they have symptoms, will be infected by them before they have those symptoms,’ he told the programme.

Track-and-trace staff have failed to reach half of people who have been in contact with Covid-19 patients in Blackburn – as the town hurtles towards a local lockdown. Pictured: a warning sign in Blackburn town centre

‘So, there’s a 48 hour window which is critical to get the contacts of the first case contacted, and if we don’t get them contacted, and if they don’t then get tested and self-isolated, and they then have symptoms, we do risk the spread progressing.’

It is not clear why the contacts provided were not able to be reached and the government said the NHS scheme had helped identify thousands of cases.

It was revealed earlier this week that Blackburn could be the next area to be plunged into local lockdown after a spike of coronavirus cases.

Civic chiefs imposed new restrictions – set to stay in place for ‘at least a month’ – in a bid to prevent such measures as those put in place in Leicester following a Covid-19 outbreak in the Midlands city last month. 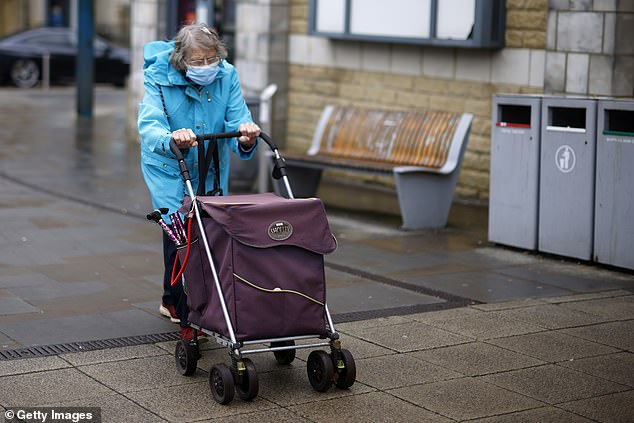 It was revealed earlier this week that Blackburn could be the next area to be plunged into local lockdown after a spike of coronavirus cases. Pictured: an elderly woman wears a face mask to do her shopping in Blackburn town centre this weekend

Blackburn with Darwen Council announced on Tuesday that only two people can now visit another person at home. Face coverings should be worn in enclosed public spaces and people are being encouraging people to swap handshakes for ‘elbow bumps’ to help reduce hand-to-hand contact.

Recent statistics from the government show that of the people in England who tested positive for Covid-19 between July 2 and 8, 17.1 per cent could not be reached by NHS track and trace and a further 4.1 per cent did not provide their phone number.

It said 71.1 per cent of the contacts provided were reached, but 21.8 per cent of those who originally tested positive said they had not been in close contact with anyone during the time frame.

Fewer than half of contacts were reached in Oldham, St Helens, Manchester and Rochdale, according to The Independent who saw a leaked report.

Professor Harrison has called for testing and tracing to be carried out at a local rather than national level, and for Public Health England to share more data with local authorities.

What rules have Blackburn with Darwen Council put in place?

These are the rules which Blackburn with Darwen Council announced on Tuesday:

He added that PHE had only started sharing data about the areas where new infections were being registered on 29 June.

He said: ‘That has made a great difference in three weeks for us in being able to identify what our local outbreak issue is.’

‘Had we had that data much earlier in this pandemic, I think we could have made progress much more rapidly.’

The Department for Health and Social Care said the scheme had so far helped test and isolate more than 180,000 cases.

It said: ‘The service is working closely with local authorities across England to help manage local outbreaks and data is shared daily.

‘The service relies on everyone playing their part – please book a test if you have symptoms, self-isolate and help us trace anyone you’ve been in contact with.’

The NHS test and trace scheme began on June 1 and Prime Minister Boris Johnson claimed it would be ‘world beating’.

It comes after a top civil servant admitted last night that the UK’s coronavirus test and trace system would not stop the feared second wave because it can only find a third of the people it needs.

Alex Cooper, who looks after two of the five pillars of the test process, said it could only identify 37 per cent of the total contacts it needed to be fully effective.

The senior official admitted in an industry briefing the number needed to be higher to make the system work properly.

He said: ‘We need to be finding roughly half of the the people that have got Covid so that we can keep R down if test and trace is going to work.’