‘That’s what ending lockdown is all about’: Tracy Grimshaw brings viewers to tears as lonely older Australians trapped in care homes are surprised with emotional family reunion on Freedom Day

Freedom Day finally arrived for long-suffering residents in NSW on Monday prompting droves of young people to head down to the pub or grab a table at their favourite restaurant.

But for elderly Australians living in aged care facilities who have been cruelly cut off from their families for 106 straight days, the reopening meant so much more.

It was a chance to finally hug their children and catch up after months of being completely alone, isolated from the ones they love most during the twilight years of their lives.

There were tears of joy when the doors of the Moran Aged Care facility in Sylvania, 20km south of Sydney’s CBD, opened in the morning as loved ones rushed inside to greet those they hold dear.

A Current Affair host Tracy Grimshaw said the emotional reunions are the most important part of exiting Covid lockdown.

WHAT ARE THE NEW RULES FOR VISITORS TO AGED CARE HOMES?

Lonely residents were not even allowed to mingle with each other due to their elevated risk of complications from Covid-19.

But from October 11, two fully vaccinated people are allowed to visit. The number of children under 12 that can visit is unlimited.

Restrictions are set to be eased even further when the state hits its 80 per cent vaccination target before October 25.

‘If you thought lockdown was tough, spare a thought for our seniors,’ she said.

‘They’ve been kept away from everyone they hold dear. No hugs and no kisses until now.

‘Restaurants and haircuts are very important but that is what getting out of lockdown is all about.’

Scott and his daughter Alicia were among many that turned up as the facility opened to visitors for the first time since June.

They went to surprise Scott’s mother Miriam who ‘was over the moon’. 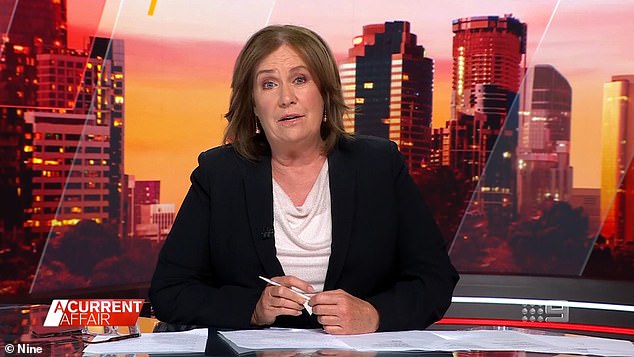 Another visitor said it’s been an extremely harrowing time for their family because of her mother’s worsening memory loss.

‘My mum’s memory is going so I think she’s starting to forget us over the last few months, so it’s really sad,’ she told the program.

‘We’ve brought all the photos and things to remind her,’ she said before bursting into tears. 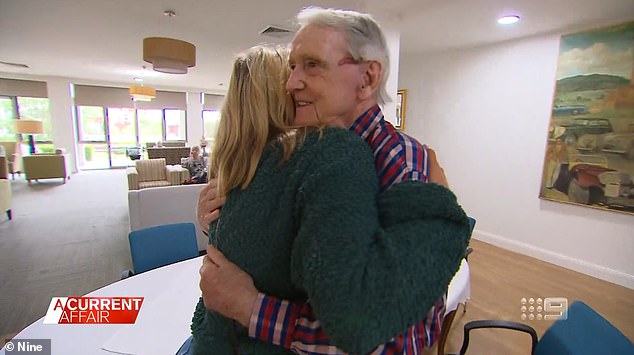 A woman named Catherine who was there to see her mum said the last four months have been miserable.

‘Over the past four months it’s been horrendous because our mum is deaf, so it’s been difficult to communicate over the phone,’ she said.

The visits will hopefully be first of many now that the state has soared past its 70 per cent vaccination target and is one track to surpass 90 per cent coverage before next year.

‘The value of a loved one coming in is incredible,’ resident Kevin said.