Trade deal with the US could make children fatter

The Royal College of Paediatrics and Child Health (RCPCH) said US food producers were hostile to many anti-obesity strategies in the UK, such as traffic light labels.

Prime Minister Theresa May and US President Donald Trump have talked up the prospects of a post-Brexit US-UK trade deal.

The Royal College of Paediatrics and Child Health (RCPCH) said US food producers were hostile to many anti-obesity strategies in the UK, such as traffic light labels (file image)

Reports suggest that at the same time as outlining trade talks with the US, the Government is preparing to U-turn on its maligned junk food tactics and start cracking down harder on advertising aimed at children.

Professor Russell Viner, the RCPCH president, told the Guardian: ‘We’re concerned by the evidence of US hostility in trade talks towards countries that want to set their own domestic agenda on reducing sugar intake, particularly the push [from the US] to keep traffic light labelling voluntary.

‘Children’s health outcomes are much worse in the US than in many other comparable countries, and we don’t want to import these along with the sugar.’

Sustain, the food charity, told the paper that a US government document on striking trade deals with other countries showed evidence of US ‘aggression’ towards countries it trades with having tougher food rules than apply in America.

Kath Dalmeny, Sustain’s chief executive, said: ‘The US record on trade is clear. They export corn syrup, processed junk food and sugar. And along with it obesity, diabetes and diet-related disease.

‘We’ve been told that No 10 is preparing to update its obesity strategy. Part of that must be to get us all eating more healthily.

‘But a sugary, junk-filled trade deal will drive a coach and horses through it all. We mustn’t sell off our children’s health in exchange for a trade deal with the US. Trade deals must put public health first.’ 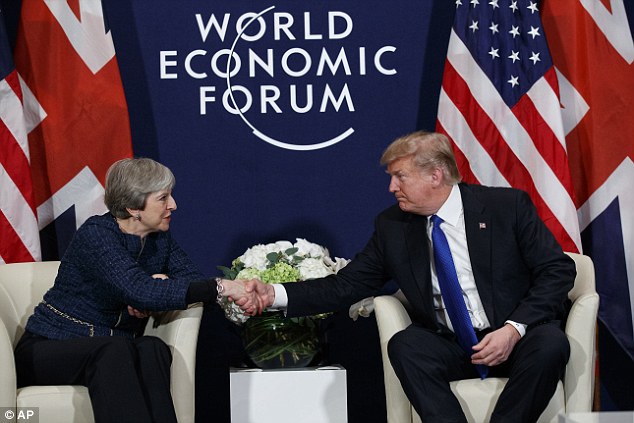 Last week a senior US congressman said Britain will be able to strike a trade deal with the US ‘as quickly as possible’ after we quit the EU.

George Holding, a Republican and chairman of the British-American parliamentary group, said America is ready to get ‘around the table’ and thrash out a deal.

But he warned if the UK stays in the customs union or highly aligned to EU rules after Brexit would be a ‘mistake’ and endanger the prospect of a swift deal with the US.

Mr Holding, who is married to a British woman and has a dog named after Winston Churchill, said: ‘Trade agreements take a long time, but the politics are very good for it.

‘I think as soon as you exit the EU … we will be able to be at the table and have something concluded as quickly as possible as far as trade agreements go.’

What has the US said about the prospect of a post Brexit trade deal, and how has the tone changed since Trump was elected? 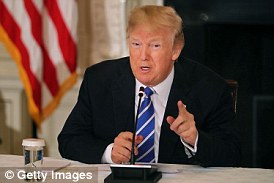 At the height of the EU referendum campaign the then US President warned the UK would be ‘at the back of the queue’ for a trade deal if we quit the EU.

His friendship with Nigel Farage encouraged Donald Trump to embrace the UK’s looming departure and talk up the prospects of a trade deal.

The powerful Republican speaker of the House of Representatives said the US stands ready to do a trade deal with the UK as soon as possible after Brexit.

Paul Ryan made the comment while on a trip to meet with Cabinet ministers in the UK.

The US President promised a ‘very big and exciting’ trade deal with the UK after Brexit, in a post on Twitter.