A recreation of a protective deity destroyed by Islamic State in Iraq now “haunts” Trafalgar Square – in the latest Fourth Plinth unveiling.

The sculpture, titled The Invisible Enemy Should Not Exist, has been made with 10,500 empty, Iraqi date syrup cans.

It is the work of US artist Michael Rakowitz, who has been attempting, since 2006, to remake more than 7,000 archaeological artefacts looted from the country of his ancestors. 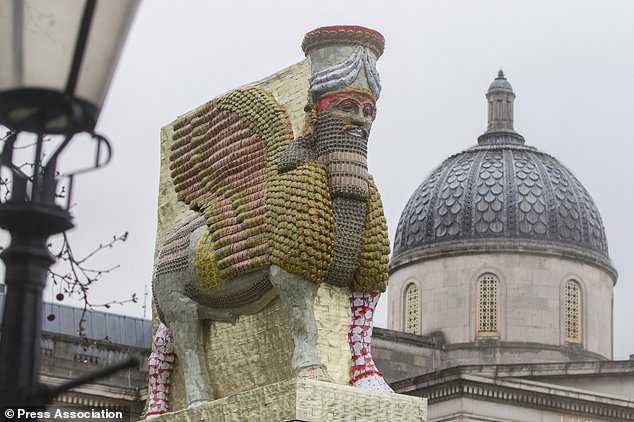 He has recreated Lamassu, a winged bull and protective deity which guarded the entrance to the Nergal Gate of Nineveh from 700BC, out of date syrup cans.

The deity was destroyed, along with other artefacts in the Mosul Museum, by terror group IS in 2015.

The cans are representative of a once-thriving industry “decimated” by war, said Rakowitz, who has Iraqi roots.

They represent “the human, economic and ecological disasters caused by the Iraq wars and their aftermath”, he added.

They are also designed to reflect the way that the reliefs at the base of Nelson’s Column in Trafalgar Square are made from salvaged cannons.

Rakowitz said the sculpture “allows an apparition to haunt Trafalgar Square at a time when we are witnessing a massive migration of people fleeing Iraq and Syria”.

“I see this work as a ghost of the original, and a placeholder for those human lives that cannot be reconstructed, that are still searching for sanctuary.”

The recreation “stands outside with its wings raised. It’s still performing its duty as guardian of Iraq’s past and present, facing south-east … hoping to return in the future.”

London Mayor Sadiq Khan said: “Michael’s work shows the power of art to bring to life politics, cultures and personal stories from around the world and across generations.”

The sculpture is the 12th to adorn the Fourth Plinth.

It will stay on display until 2020, when a sculpture of a whirl of cream topped with parasites, by British artist Heather Phillipson, will take its place.

Some of the most memorable Fourth Plinth sculptures over the years have included Marc Quinn’s sculpture of Alison Lapper, who was born with no arms, Yinka Shonibare’s scaled-down replica of HMS Victory, contained in a glass bottle, and Katharina Fritsch’s blue fibreglass sculpture of a cockerel.

Antony Gormley created One & Other in which people – including a man who posed naked – took it in turns to spend an hour on the plinth.