It’s PLINTH Philip! Trafalgar Square’s famous fourth podium is being sized-up for memorial statue of the Duke of Edinburgh to be built after his death

A state of Prince Philip may stand on the fourth plinth in Trafalgar Square, ending 20 years of modern art displays.

A proposed memorial statue is being considered for the Duke of Edinburgh with the iconic location in central London seen as the prime spot.

It would mean the statue would take up a place previously occupied by a giant blue cockerel, a large thumb and a naked man.

The memorial for Prince Philip, 98, will be commissioned after his death, according to The Sunday Times.

The plinth was originally intended to hold an equestrian statue of King William IV but remained bare for 150 years due to insufficient funds.

From 1998, it has displayed a rolling programme of temporary artworks and has become a much-loved, but sometimes controversial, modern art staple.

The current occupant is a recreation of a statue in Iraq of a lamassu, a winged bull, which was standing in Iraq from 700BC until 2015 when it was destroyed by ISIS. 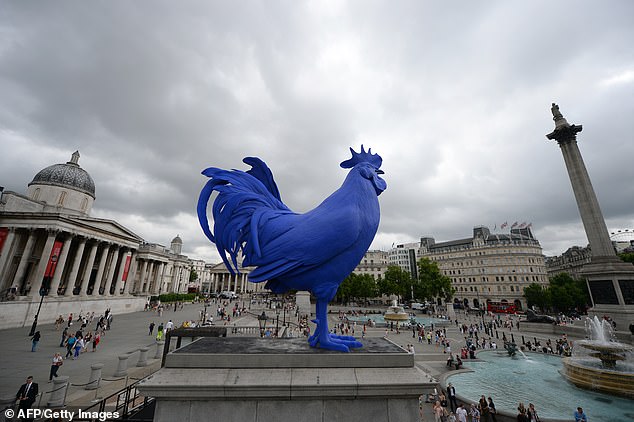 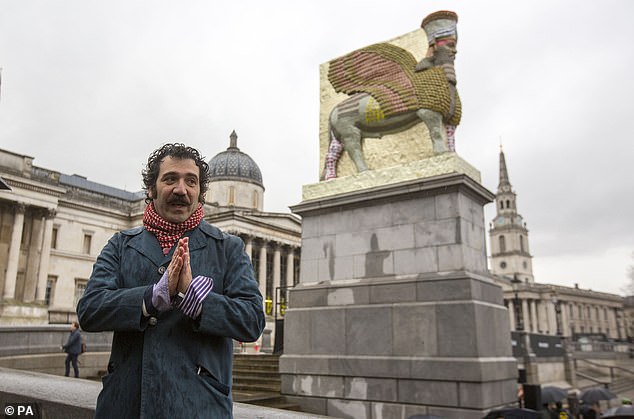 The current occupant is a recreation of a statue in Iraq of a lamassu, a winged bull, which was standing in Iraq from 700BC until 2015 when it was destroyed by ISIS, created by artist Michael Rakowitz

Created by artist Michael Rakowitz, it is titled ‘The Invisible Enemy Should Not Exist’ and is made from tin cans.

The Fourth Plinth Commission is led by the Mayor of London’s Culture Team but some of its choices have been less popular than others.

Anthony Gormley’s ‘One and Other’ famously rotated members of the public who were given an hour to do whatever they liked on the plinth.

But it was often hijacked by protesters and in one instance, a man shed his clothes before being asked to cover up by police. 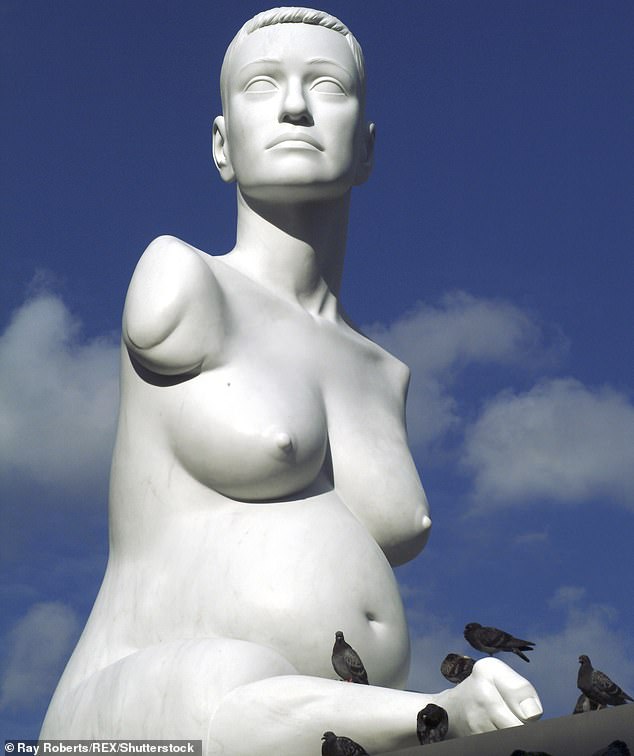 A source said of the proposed Prince Philip memorial: ‘A statue of the Queen on the fourth plinth was the original plan.

‘Several artists were approached by the palace to sound out whether they would submit designs when the time comes.

‘But in the past couple of years everyone has been made aware that it could also be for the Duke of Edinburgh.’

It is not yet clear what kind of statue is envisaged and Buckingham Palace has not commented on the plans.

But it could attract criticism due to the Duke’s many gaffes and comments which have been deemed offensive.