‘It’s a bit Keystone cops’: Traffic police are ridiculed for trying to catch speeding drivers on an EMPTY A-road with barely any traffic because of lockdown measures

Heavy-handed cops were spotted trying to catch speeding motorists – on an empty A-road.

The traffic police officers were seen just before midday on Monday with speed guns.

One onlooker said: ‘It was a bit Keystone Cops. It was total overkill, there was no one on the roads.’

The speed trap was in place on the A3 at Tibbet’s Corner, in Wimbledon, south London. The road which leads from the capital to the M25 was deserted due to coronavirus lockdown.

Elsewhere in the country, lockdown measures have seen police forces inundated with public tip-off calls about people breaching the Covid-19 social distancing rules every five minutes, according to a police chief in Derbyshire.

Forces have seen a noticeable increase in the number of calls warning them about those refusing to comply with the government’s lockdown guidelines, Derbyshire’s chief constable Peter Goodman told The Telegraph.

Meanwhile in West Yorkshire, chief constable John Robbins said he too had seen a rise in the number of calls his force were receiving from concerned residents alerting the police to those who were breaching the government’s restrictions

In order to manage the surge in public tip-offs, some forces in the country have created online services which allow users to enter the address of those flouting lockdown.

Last month, Humberside, West Midlands, Greater Manchester and Avon and Somerset Police announced that they had set up an online portal which would enable people to report the alleged breach after an increase in the number of non-emergency 101 calls left the police overstretched. 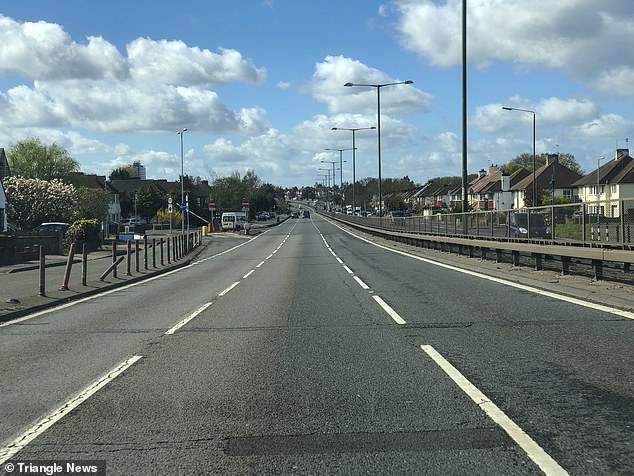 The speed trap was in place on the A3 at Tibbet’s Corner, in Wimbledon, south London

In March, Derbyshire Police used drones to film hill walkers in the Peak District and poured black water dye into the Blue Lagoon in Buxton to deter visitors at the beauty spot.

This weekend Britons across the nation continued to flout social distancing guidelines to flock to the country’s sun-soaked parks and beaches.

Despite government warnings, revellers were seen descending upon London’s Battersea Park and Greenwich park to embrace the warm weather.

Meanwhile in the capital’s Regent’s Park, officers were stopping those who had chosen to leave their homes and flout government rules.