Tragedy as boy, six, is killed after his friends ‘insert a compressor nozzle into his backside

Tragedy as boy, six, is killed after his friends ‘insert a compressor nozzle into his backside and pump his stomach full of air’ in India

A six-year-old boy has died in India after his friends put a compressor nozzle into his backside and pumped his abdomen full of air.

Kanha Yadav was playing with the group at his father’s factory in Madhya Pradesh’s Indore yesterday when the shocking incident happened.

His father Ramchandra said two of his son’s friends brought him home with a swollen stomach. 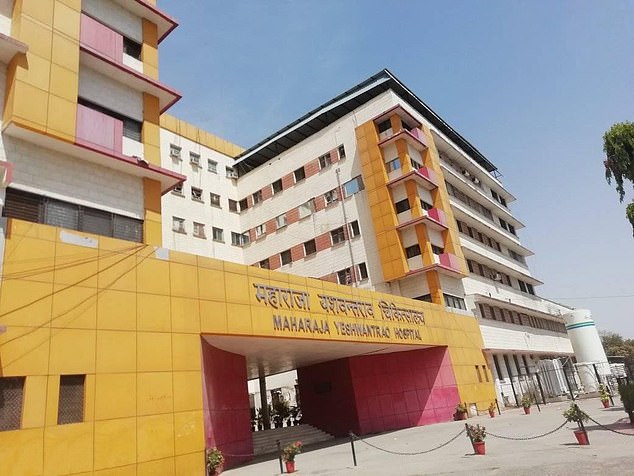 In a paper in the Journal of Medical Case Reports, doctors explained how air pressurised beyond a certain point ‘forms a column that acts like a solid body’.

A sudden inrush of air into the body can lead to injuries called barotrauma.

Barotrauma, although rare, occurs when the pressure inside a bodily tissue is higher than the area outside it, which causes it to burst.

Air pumped into the anus, for example, would travel straight into the bowel and inflate the organ like a balloon until it couldn’t withstand the pressure any more and ruptured.

If air was pumped in the same manner into the mouth it could have the same effect on the stomach or lungs.

‘Management ranges from repair or resection with proximal enterostomy, because multiple other injuries may perforate later and have a delayed presentation.’

Mr Yadav rushed Kanha to Maharaja Yeshwantrao (MY) hospital but he died.

Sanjay Shukla, the inspector at Bhanwar Kua police station, told NDTV: ‘The father of the deceased works in a factory in Palda industrial area and lives with his family on the premises.’

He added: ‘As per the initial investigation, we have come to know that the boy’s friends filled his abdomen with air by inserting an air compressor’s nozzle into his rectum when they were playing.’

His body was sent for post-mortem and an exact cause of death will follow.

In May, an Indian man’s colon burst after his ‘perverted’ friends put a compressed air pump into his anus and inflated it, a bizarre medical report revealed.

The 30-year-old was taken to hospital after the horrifying prank left him needing his entire bowel removed because of a ‘rectal blowout’, an injury caused by air pressure rising so high inside the rectum that it explodes.

Doctors reported it in a journal article alongside reports of two other men with similar injuries.

One had pressurised air sprayed into his backside in an alleged accident, while another suffered the agony at the hands of robbers whom he tried to stop.

The experts warned air can be as damaging and industrial machinery should be treated with care.

Doctors from the Maulana Azad Medical College in New Delhi and the All India Institute of Medical Sciences in Rishikesh wrote the report.

They said the men suffered high-pressure injuries which were normally ‘confined to battlefields’.