Tragedy as eight people die in a horrific head-on car crash – leaving a boy, nine, fighting for his life

At least eight people are believed to be dead and a young boy is fighting for life after a horrific head-on crash between two cars.

Two vehicles were travelling along State Highway One, south of Rotorua in New Zealand’s North Island, in opposite directions when they collided in wet conditions.

Authorities at the scene were unable to immediately confirm the death toll, but said there had been multiple deaths.

Emergency services rushed to the scene shortly before 10.30am local time on Sunday, while the serious crash unit arrived at midday.

Two vehicles were travelling along State Highway One (pictured), south of Rotorua in New Zealand’s North Island, in opposite directions when they collided in wet conditions

‘To describe the scene behind us as a complete tragedy is an understatement,’ Inspector Brent Crowe told reporters.

‘What we have is two vehicles travelling on State Highway One, mid morning, have come together, head-on collision in wet conditions.’

Inspector Crow said there was one person in one vehicle, while there was ‘quite a number’ in the other car.

‘As a result multiple persons are deceased in the vehicles, our main focus at the moment is to ensure we extract the deceased, look after the deceased and take care of the families,’ he said.

‘There will also be a thorough investigation as to why the crash has happened and that could take a considerable amount of time.’

A rescue helicopter pilot has told NZ media eight people died in the crash, involving an SUV and a van, and left a young boy with critical injuries.

The Disaster Victim Identification team (DVI) has been called in to assist with establishing details of the catastrophic crash. 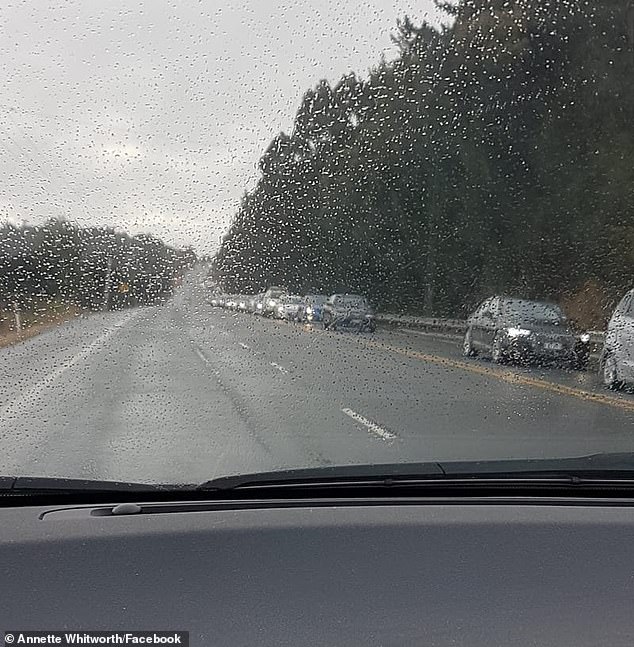 Inspector Crow said police believe one of the vehicles crossed to the incorrect side of the road on a ‘moderate left-hand bend’ while the road was wet.

He couldn’t confirm whether all people in both cars were wearing seat belts.

The nine-year-old boy has been transported from Tokoroa Hospital to Waikato Hospital in a critical condition.

Motorists are being urged to plan their journey and take into consideration delays on the main road as fire crews cordoned off the scene.