Tragedy as Japanese boy, 7, dies in hospital after near drowning at popular kids’ lagoon just hours into his family holiday

By Alex Chapman and Sahar Mourad For Daily Mail Australia

A Japanese boy has died in hospital after a near drowning at a kids’ lagoon in Cairns.

The boy’s family landed on Saturday morning, heading straight from the airport to the Cairns Esplanade Lagoon for a swim.

Bystanders alerted the authorities when the boy, who was seven, failed to resurface after a swim.

He was pulled from the water at around 3.50pm where paramedics and lifeguards performed CPR on him.

The boy was rushed to Cairns Hospital where he was put on life support.

The seven-year-old was taken to Cairns Hospital in a critical condition after being pulled out of the water by lifeguards at Cairns Esplanade Lagoon about 4.15pm on Saturday (stock)

He remained in a critical condition overnight, before being taken off life support and pronounced dead at about midday Sunday.

Police are preparing a report for the coroner.

The consular were notified to support the family during the difficult period.

‘It’s a tragic circumstance for them on what should be an enjoyable time in the festive season,’ District Duty Officer Senior Sergeant Duane Amos told The Cairns Post. 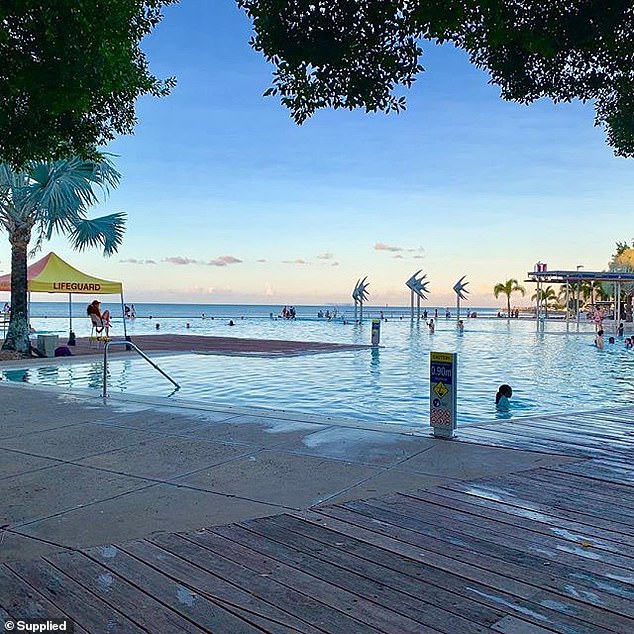 A short time after the horrific incident, a man on a Buck’s party was captured diving into the water as part of the prank (stock)

He warned families to keep and eye on their children during the holiday period when they’re out swimming.

He also urged those who don’t know how to swim to keep out of the water.

The Cairns Esplanade Lagoon is located on the foreshore and features a 4,800metre swimming pool.

The pool – which is large enough to accommodate 1,000 swimmers – is scrupulously monitored by lifeguards.

According to Lifesaving Australia, as at 22 December 2018, there have been 23 drowning deaths reported in Australia this summer.