A family has described their race against time to find a cure for their two-year-old son suffering from a rare fatal disease dubbed ‘Parkinson’s mixed with Alzheimer’s for kids’.

Deborah and Antoine Vauclare told the New York Post in an exclusive interview that they knew something was wrong with Léo from age one.

He was having trouble waking and balancing and, soon enough, his speech regressed and he reverted to crawling.

After months of doctors’ vists and various tests, Léo was diagnosed with Infantile Neuroaxonal Dystrophy, which causes muscle weakness, uncontrolled rapid eye movement, and a loss of vision, speech and cognitive skills.

It is referred to as a childhood disease because most patients never reach adulthood. There is no treatment once symptoms appear or cure. 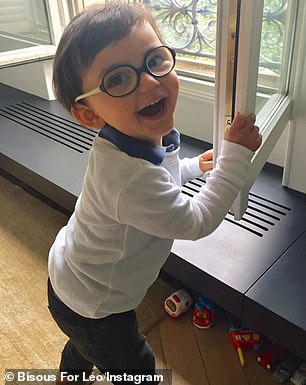 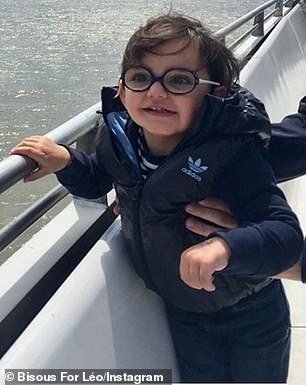 There were signs from age one that Léo (left and right) was developing more slowly compared to his peers. He was delayed in walking – eventually reverting to crawling – and his speech regressed

Deborah, who is from New York, told the Post she met native Frenchman Antoine in 2010 after she moved to Paris to accept an internship at his architectural firm.

They eventually married and their son Léo was born in April 2016.

Neither knew they were carrying a copy of a nonworking gene that leads to the debilitating disease.

Léo stopped hitting developmental milestones at around age one when he was delayed in learning how to walk.

‘We thought he would walk by his first birthday but it wasn’t until 14 months that he started to take his first steps alone,’ Deborah told the Post.

‘He would take five or six steps, then he’d fall. When he was still doing that at 18 months, we were concerned.’

Léo’s pediatrician diagnosed him with global developmental delay, which is when a child takes longer to reach certain development milestones than other children their age.

But then Léo stopped speaking and reverted to crawling. In April, Antoine and Deborah visited a geneticist who performed blood tests

INAD is caused by a mutation in the PLA2G6 gene, which provides instruction to make an enzyme that helps break down iron and certain fats known as  phospholipids. 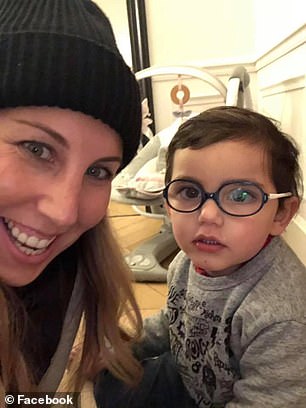 INAD is a rare, genetic condition in which the body is unable to break down certain fats and iron that keep cell membranes intact and functioning properly. Pictured: Léo diagnosed with a family friend

Symptoms usually appear between six and 18 months old. Children will be delayed hitting developmental milestones including crawling and speaking and, in some cases, lose skills already acquired.

According to the Genetic Home Reference, children with INAD have muscles that are first weak and then become stiff.

Eventually the child loses the ability to see, speak and think cognitively. Death usually occurs between ages five and 10.

INAD has no cure and there is no treatment to stop the progression of symptoms.

The National Organization for Rare Disorders estimates that it occurs in about one to two children per million.

At the time, Deborah was seven months’ pregnant with the couple’s second child, Eva, and doctors told them there was a 25 percent chance she would develop the disease.

‘It’s just crazy to think that I went all the way to France and found someone that I fell in love with, and we were both carriers of this rare genetic mutation,’ Deborah told the Post.

However, the Vauclares were horrified as they researched INAD and learned of its devastating effects. 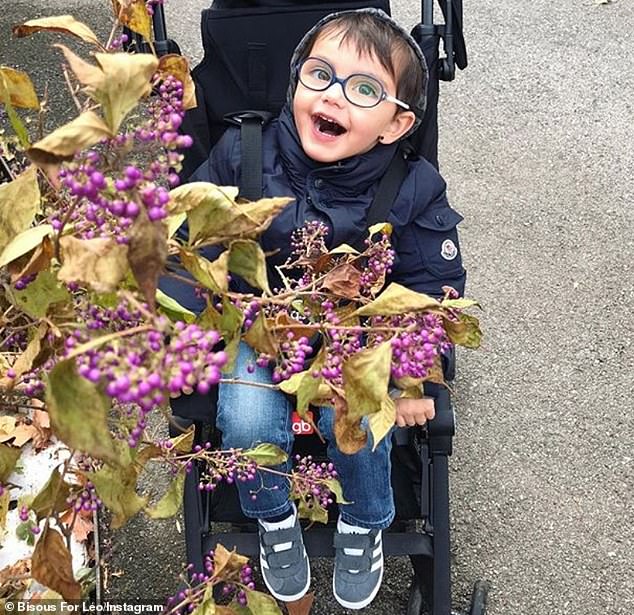 There is currently no treatment or cure. Over time, Léo (pictured) will lose his speech, vision and cognitive skills. Death usually occurs between ages five and 10 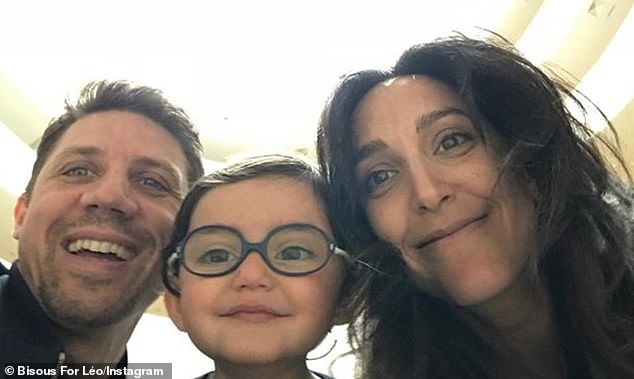 This month, Léo was enrolled in a clinical trial at a New Jersey hospital to receive a medication that could delay the onset of his symptoms. Pictured: Léo with parents Antoine and Deborah

The couple soon started a campaign called Bisous For Léo (Kisses For Léo) to raise funds for research for INAD treatments and cures.

They also joined the INADcure Foundation, a US-based nonprofit that works to raise awareness and money for research.

Antoine and Deborah were put into contact with doctors who are developing clinical trials involving gene editing and enzyme therapy replacement.

Earlier this month, Léo was enrolled in a clinical trial at Goryeb Children’s Hospital in Morristown, New Jersey.

He’s receiving a drug known as RT0001, which, doctors told The Post, will regulate Léo’s iron buildup if successful.

‘We’re trying to push the urgency to these scientists, doctors and researchers because we are on a time crunch,’ Deborah told the newspaper. ‘Otherwise, Léo is not going to live.’