The sobering stories of the Victoria Cross heroes whose lives ended in tragedy or disgrace are told in a new book.

They were the bravest of the brave, earning the highest award for gallantry for acts of unrivalled heroism on the front line.

But receiving the accolade did not bring these men contentment, happiness or lasting fame.

In fact, their reputations were tarnished by incidents often out of their control and in some cases they were shunned by society. 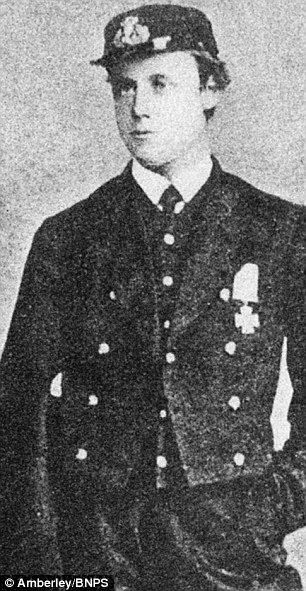 Midshipman Duncan Boyes carried the Queens Colour through barrage of enemy fire during the Shimonoseki campaigns in Japan (left). But a court martial left him depressed and in anguish and in 1871, he jumped out of a hotel window in Dunedin, New Zealand 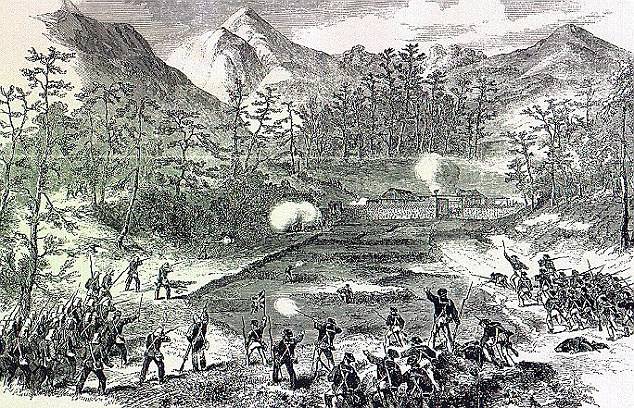 Author Brian Izzard has highlighted the plight of 27 Victoria Cross holders who befell ignominy in later life in his book Glory And Dishonour including one of the heroes of the remarkable rearguard at Rorke’s Drift where 150 British soldiers held off 4,000 enemy warriors.

He also sheds new light on the tragic tale of a gallant midshipman who was awarded the Victoria Cross aged just 17 but couldn’t cope with the shame of being stripped of it for a few misdemeanours and jumped from a hotel window to his death four years later.

Cheltenham-born Midshipman Duncan Boyes carried the Queen’s Colour through withering Japanese fire as he led a squadron of British, French, Dutch and American ships at Shimonoseki in September 1864.

They landed to destroy enemy guns and blow up ammunition but a large Japanese force hidden in thick bush launched a surprise counter attack.

Afterwards it was found six musket balls had peppered the colour. 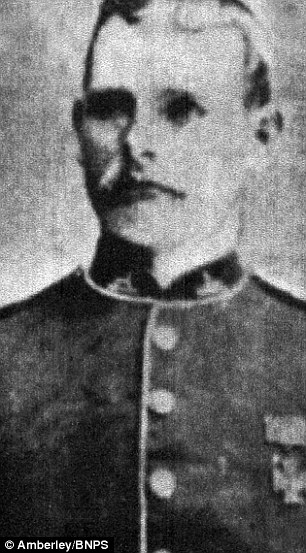 Robert Jones, who took part in the defence of Rorke’s Drift, was plagued with nightmares and tragically turned a gun on himself when he went out to shoot crows

Seven seamen were killed and another 26 were wounded in the offensive.

Commander John Moresby recorded: ‘They were met by hot fire from the parapet of a ditch in front of the battery and from the top of an eight foot wall protecting the palisade.

‘Our men never checked, and rushing on swarmed over the wall and won the stockade, the enemy disappearing into the bush.’

Boyes’ naval career ended abruptly in February 1867 when while serving on the HMS Cadmus he was court-martialled for breaking into the naval yard in Bermuda with a friend at night after a run ashore.

The pair, who may have been drunk, had been turned away from the main gate because they did not have passes.

Admiralty papers have revealed Boyes was warned several times about being drunk and being impertinent to a commander.

There is no record of Boyes being a problem before receiving the Victoria Cross, so his fall from grace suggests he found it hard to cope with his role of young hero.

The punishment left him shattered and severe depression and heavy drinking took over.

In 1871, he jumped out of a hotel window in Dunedin, New Zealand.

Welshman Private Robert Jones, of the 2nd Battalion, 24th Regiment of Foot, took part in the defence of Rorke’s Drift in January 1879 during the Zulu War. 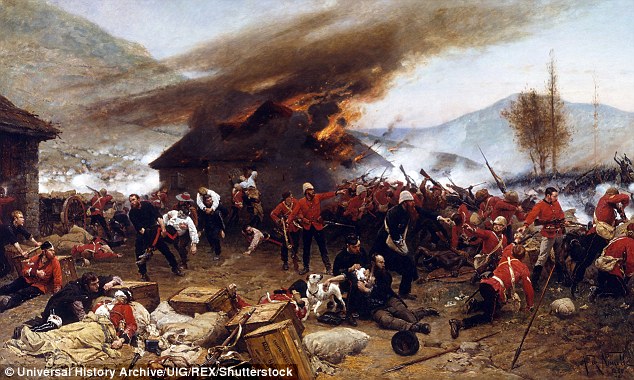 When Private Robert Jones went to carry the seventh man, who was delirious and refusing to be helped, to safety he found him in his bed being stabbed by the Zulus in the defence of Rorke’s Drift 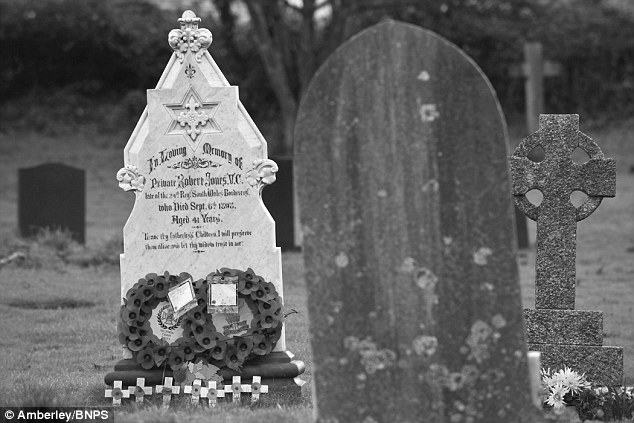 The 21 year old was one of just two soldiers posted in a room of a hospital whose wall had been destroyed tasked with stopping any marauding Zulus from getting through.

They kept up a steady fire against enormous odds and saved six out of the seven patients in the room.

When Jones went to carry the seventh man, who was delirious and refusing to be helped, to safety he found him in his bed being stabbed by the Zulus.

Jones suffered four spear wounds, was struck by a bullet and had minor burns. 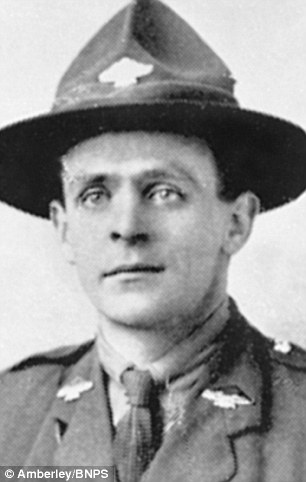 Sgt Paul Grant led a platoon at Bancourt, northern France in 1918. Almost 40 years later, he was turfed out of reception for Victoria Cross holders after slapping Lady Mountbatten’s bottom

After his discharge, he settled in Herefordshire where he became a farm labourer but was plagued with recurring nightmares following his desperate hand-to-hand combat with Zulus.

He borrowed his employer’s shotgun to go crow shooting and shot himself in the head aged 41 in 1898.

A verdict of suicide while being insane was passed and he was denied a proper burial by the church who turned his grave in the opposite direction to others at the cemetery.

Sergeant Paul Grant, of the 1st Battalion, Wellington Regiment, led a platoon with the near-suicidal aim of silencing a line of five machine gun posts which were proving ‘a serious obstacle’ at Bancourt in northern France on September 1, 1918.

Despite withering fire, the platoon advanced and when they were 20 yards away Sgt Grant rushed forward and attacked the centre post.

Grant’s citation read: ‘Throughout the whole operation on this and the two previous days Sergeant Grant displayed coolness, determination and valour of the highest order, and set a splendid example to all.’ 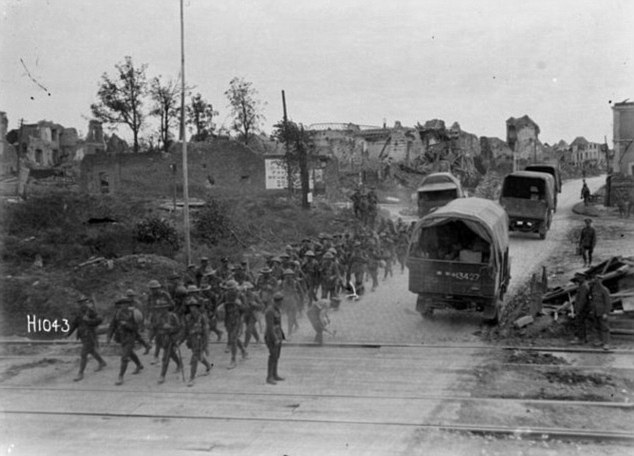 Despite withering fire, Sgt Grant’s platoon advanced and when they were 20 yards away Sgt Grant rushed forward and attacked the centre post

Almost 40 years later, Grant stumbled towards a reception for Victoria Cross holders in London hosted by Lord and Lady Mountbatten.

Clearly drunk, he went up to Lady Mountbatten and slapped her on ‘the bum’.

After a handshake with a surprised Lord Mountbatten he went to the bar, threw down some money and fell over a table. 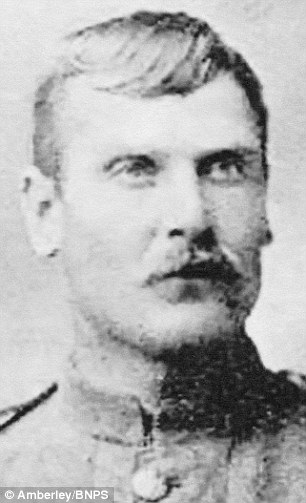 George Ravenhill received the Victoria Cross during the Second Boer War. He would later be jailed for stealing some metal worth six shillings

According to one report, the 66 year old was ‘discreetly removed from the function’. Another suggested he was ‘frogmarched’ out.

Birmingham-born Private George Ravenhill, of the 2nd Battalion, Royal Scots Fusiliers, received the Victoria Cross after his heroics at the river crossing of Colenso in the Second Boer War in 1899.

Despite being shot in the shoulder, Pte Ravenhill made several dashes into a relentless Boer barrage to salvage lost guns, returning with one of them.

After leaving the army, he was so short of money to feed his family he was forced to give up three of his children to foster care, never to see them again.

He was jailed for stealing some metal worth six shillings.

Ravenhill told the court he believed he was entitled to an army pension of £50 a year but the authorities had failed to pay it and this is why he committed the theft.

Two other Victoria Cross holders to fall foul of the law were Frederick Corbett who stole goods and embezzled money and Michael Murphy who stole oats and hay at a barracks. Both were jailed. 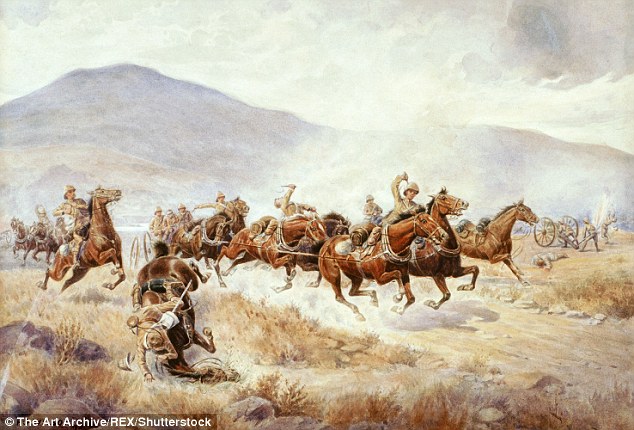 Despite being shot in the shoulder, Pte Ravenhill made several dashes into a relentless Boer barrage to salvage lost guns, returning with one of them

Mr Izzard, 70, a former journalist from Brighton, Sussex, said: ‘There are a lot of books about Victoria Cross heroes but they all seem to follow the same pattern of boys’ own stuff.

‘But for some of the men who were awarded the Victoria Cross it did prove harder to wear the medal than to win it.

‘Glory and Dishonour takes an unusual path, exploring sympathetically the lives of 27 men who received the Victoria Cross but fell from grace. 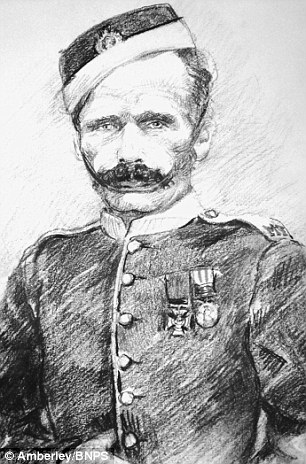 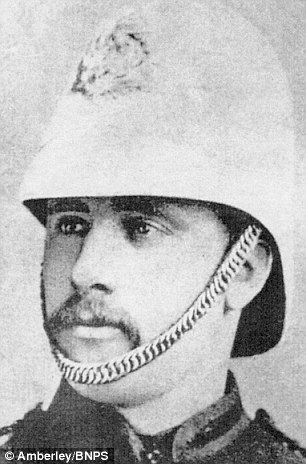 Two other Victoria Cross holders to fall foul of the law were Frederick Corbett (right) who stole goods and embezzled money and Michael Murphy (left) who stole oats and hay at a barracks. Both were jailed

‘They are very moving stories and one that stood out for me was George Ravenhill who ended up not being able to feed his family and having to give up three of his children to foster care.

‘Today there is treatment for what is commonly known as post-traumatic stress disorder. In Victorian times there was no such help.

‘Nothing, however, can detract from the courage of these men.’