The newly-available drug emicizumab, brand name Hemlibra, mimics a clotting protein that is missing in haemophilia A sufferers

A ‘trailblazing’ new treatment that prevents life-threatening bleeds in severe haemophiliacs will be available on NHS England.

Haemophilia A is one of the most well-known clotting disorders, with around 1,800 people in the UK having a severe form of the disease.

It occurs when a genetic mutation ‘deletes’ a specific protein that causes blood to clot. This can leave sufferers at risk of bleeding to death every time they have a small cut or graze.

Up until now, many patients had to have clotting drugs administered directly into a vein in their chest via a central venous access device every few days.

But the newly-available drug emicizumab, which mimics the missing protein, can be injected under the skin as little as every two weeks.

Hameophilia A occurs when the blood-clotting protein factor VIII is present at insufficient amounts in the blood.

It is defined as mild, moderate or severe depending on the amount of factor VIII.

Emicizumab, brand name Hemlibra, will be available to those with the severe form of the condition.

Haemophilia is a rare condition that affects the blood’s ability to clot. It’s usually inherited and most people who have it are male.

Normally, when you cut yourself, substances in the blood known as clotting factors combine with blood cells called platelets to make the blood sticky. This makes the bleeding stop eventually.

People with haemophilia don’t have as many clotting factors as there should be in the blood. This means they bleed for longer than usual.

There are several different types of haemophilia. The following two are the most common:

There’s no cure for haemophilia, but treatment usually allows a person with the condition to enjoy a good quality of life.

Genetically engineered clotting factor medicines are used to prevent and treat prolonged bleeding. These medicines are given as an injection.

For some, ‘man-made’ factor VIII can be given into a central venous access device at home. This is often surgically placed under the skin.

However, others have to administer the drug directly into a vein.

In contrast, Hemlibra can be given weekly or once a fortnight.

People with less extreme hameophilia A who do not respond to other treatments have been able to access the drug in England, Scotland and Wales since last year.

‘As a parent, I know cuts and scrapes happen to kids all the time but for many families these routine accidents can be distressing and life-threatening.

‘So this new treatment will change lives and lift a weight from thousands of parents.’

The Haemophilia Society chief executive Liz Carroll added: ‘This decision is fantastic news for our community.

‘Current treatments can require intravenous infusions multiple times a week which can place a significant burden on people with haemophilia and their carers.

‘This decision will mean people will have the opportunity to have treatment less frequently without intravenous access, which will enable many to live their lives more freely.’

BOY, TWO, WITH HAEMOPHILIA A BEGS ‘MUMMY DON’T HURT ME’ AS SHE IS FORCED TO INJECT HIM WITH CLOTTING DRUGS EVERY FEW DAYS 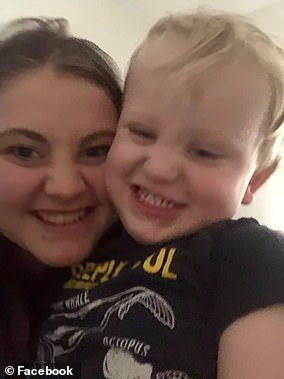 Christopher Stevens (pictured with his mother Christy) has severe haemophilia A

A two-year-old boy with haemophilia A is at risk of bleeding to death every time he bumps his head.

Christopher Stevens’ doctors recommend he stays on existing treatments for now but may switch him to Hemlibra when he is older.

His mother Christy, 22, told the BBC: ‘He has literally got no factor VIII in his body until we provide it to him.’

Factor VIII is a clotting protein.

Haemophilia A is classified as mild, moderate or severe depending on the amount of factor VIII in a patient’s blood.

Christy, of Surrey, added: ‘He is quite an active boy, so he bumps his head quite often and obviously there’s always the chance of brain bleeds, and bleeds anywhere really, without that factor VIII.

‘Sometimes he’ll say to me, ‘”Mummy, don’t hurt me”, when I’m doing his injection and that just kills you as a parent.’