There’s no doubt that when it comes to photography, freight train driver Dylan Nardini is on the right track.

The 47-year-old was recently crowned Scottish Landscape Photographer of the Year thanks to breathtaking shots that he took of a well-weathered tree on the Isle of Arran, snowfall in the village of Leadhills and fallen foliage in a country park in South Lanarkshire.

Nardini believes he developed his passion for the landscape while driving freight trains around the country for DB Cargo, for which he has worked for 28 years. He said: ‘Knowing that the judges have seen something pleasing in my work is so flattering and has given me a huge boost in what has been a very tough year for so many.’

The 2021 edition of Scottish Landscape Photographer of the Year, now in its seventh year, attracted over 3,000 entries from across the globe. In addition to the overall award, the contest handed out gongs in several categories – landscape, seascape, treescapes, urban and your vision.

Competition founder Stuart Low said: ‘It’s humbling to receive so many entries, considering how difficult things have been for everyone. It’s also been quite emotional for everyone involved in the judging.

‘Whilst we relaxed things to allow photographers to enter classic images from their archives, others adapted to the challenges of the restrictions and captured beauty on their doorsteps, and I’m sure that will touch many people’s hearts.’ Scroll down to see some of the incredible winning and commended images from the competition…

One of the stunning shots by freight train driver Dylan Nardini that helped him scoop the 2021 title of Scottish Landscape Photographer of the Year. He captured this mesmerising scene on the Isle of Arran. He explained: ‘April showers quickly moved in from the west while early morning light brought welcome warmth to a well-weathered tree, which had been shaped by the prevailing winds that batter the north coast of the island’ 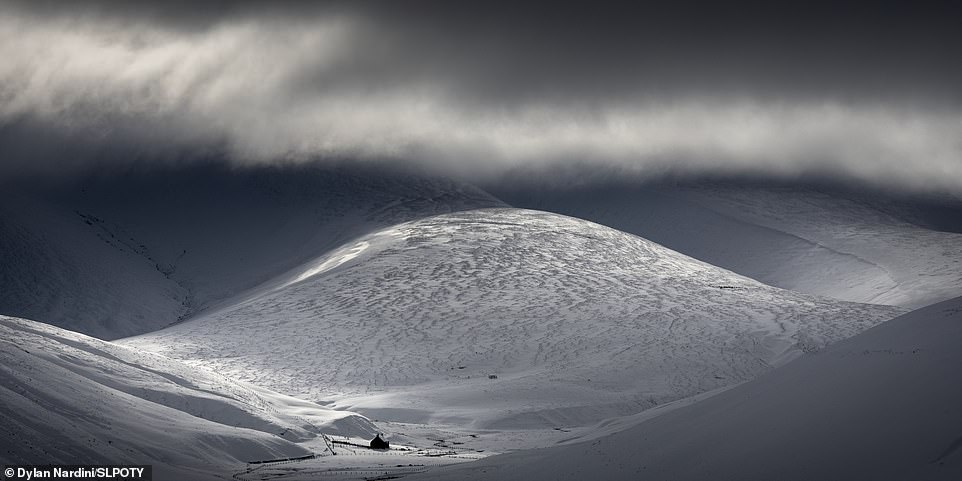 Another incredible shot from Nardini’s portfolio. He snapped it after snowfall in February 2020 in the village of Leadhills in the Southern Uplands in South Lanarkshire. He said: ‘The village had been lacking in light until a sudden brief thinning of the thick flat cloud allowed small piercing beams to pepper the textured snow-covered hills of the Southern Uplands and the deserted old shepherd’s bothy nestled at their foot’ 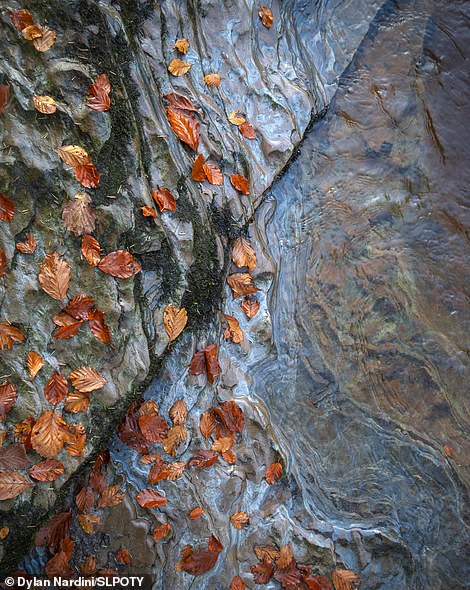 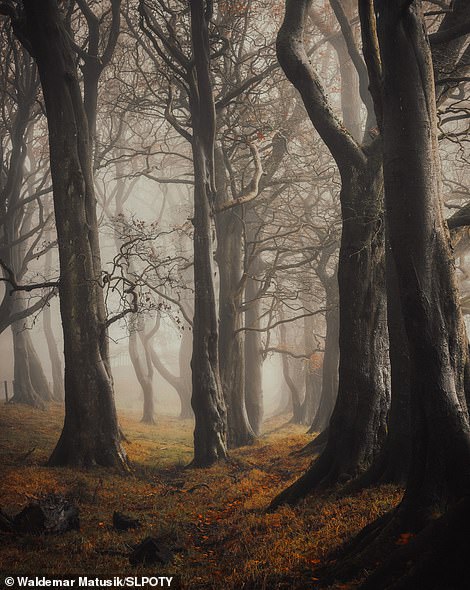 LEFT: Nardini snapped this fascinating photo of Avon Water at Chatelherault Country Park in South Lanarkshire in November 2020 and included it in his portfolio. He said: ‘Most of the leaves on the steep gorge had fallen and had speckled the cold blue rock on the banks of the Avon Water, which merges with the River Clyde. The beautiful contrast of colour and wet rock helped lift the spirits of a local walk at what was about to be the beginning of a long and draining lockdown-restricted winter.’ RIGHT: The winner of the treescapes category was Waldemar Matusik with this amazing image he snapped in woods in Bathgate, West Lothian. He explained: ‘There were misty and atmospheric weather conditions for a week or so, which is perfect for woodland photography. I went to my favourite local woods and used a telephoto lens to increase the depth of field and create space between the trees as they faded into the gloom. The thick fog was beautiful, which boosted the magic of the place’ 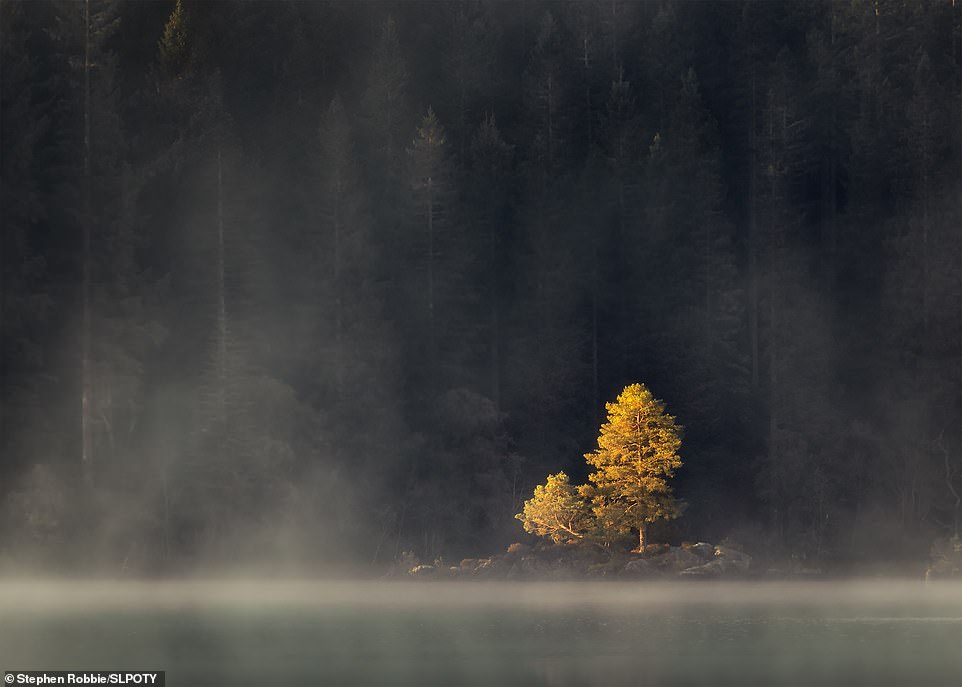 Stephen Robbie was named the competition’s overall runner-up with his portfolio of three pictures. One of them is this stunning image of Loch Ard in the Trossachs. He explained: ‘As the thick autumnal mist finally lifted on a still morning, a single tree on an isolated islet caught the first light from the sun breaking over the surrounding hills’ 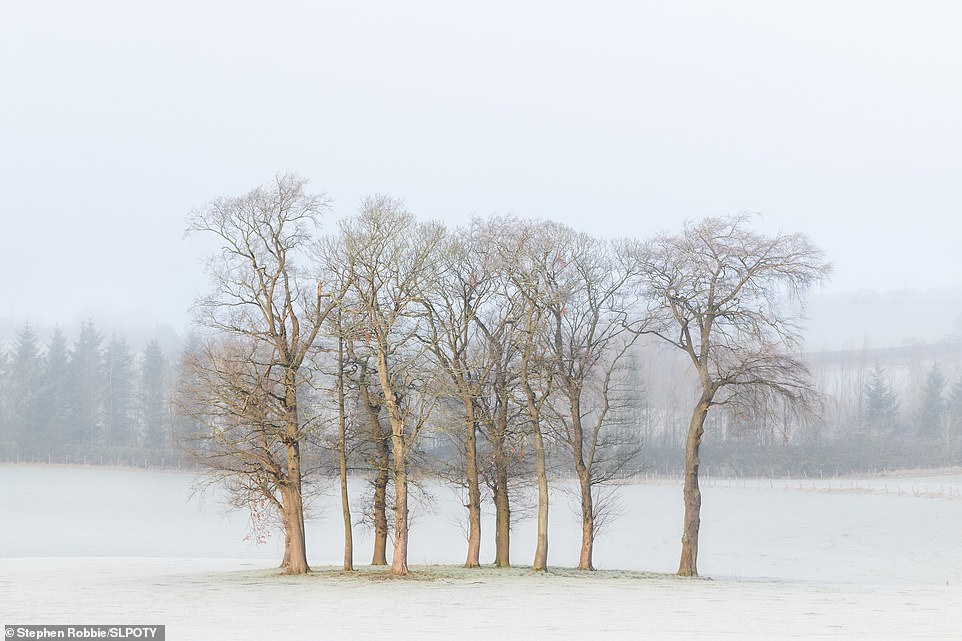 Another beautiful image by Robbie. It shows a ‘family of trees, isolated and huddling together to keep each other company on a chilly and atmospheric winter’s morning’. He snapped the photo in Muiravonside Country Park in Falkirk 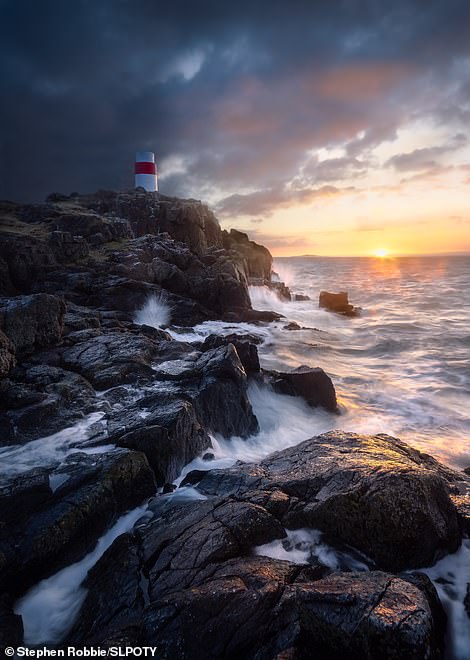 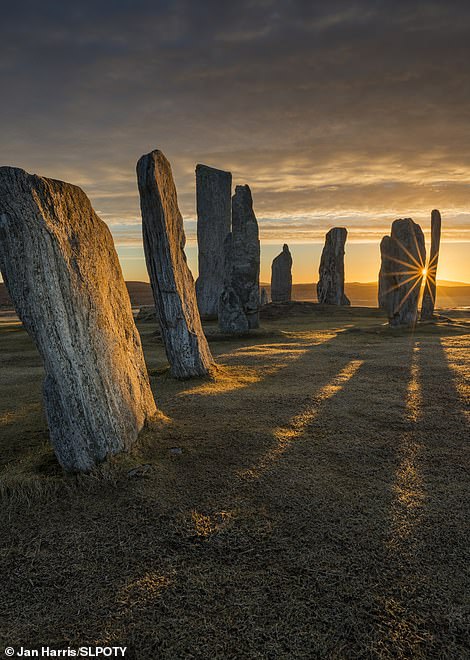 LEFT: Robbie’s third shot, which shows the Ha Lighthouse in Aberdour, Fife. He said: ‘In February 2020, the conditions combined for an image that had been visualised for some time. This was created on my final photography trip before the March 2020 lockdown.’ RIGHT: This superb shot of the Callanish Standing Stones on the Isle of Lewis was taken on a frosty March morning by Jan Harris. She was highly commended in the ‘your vision’ category 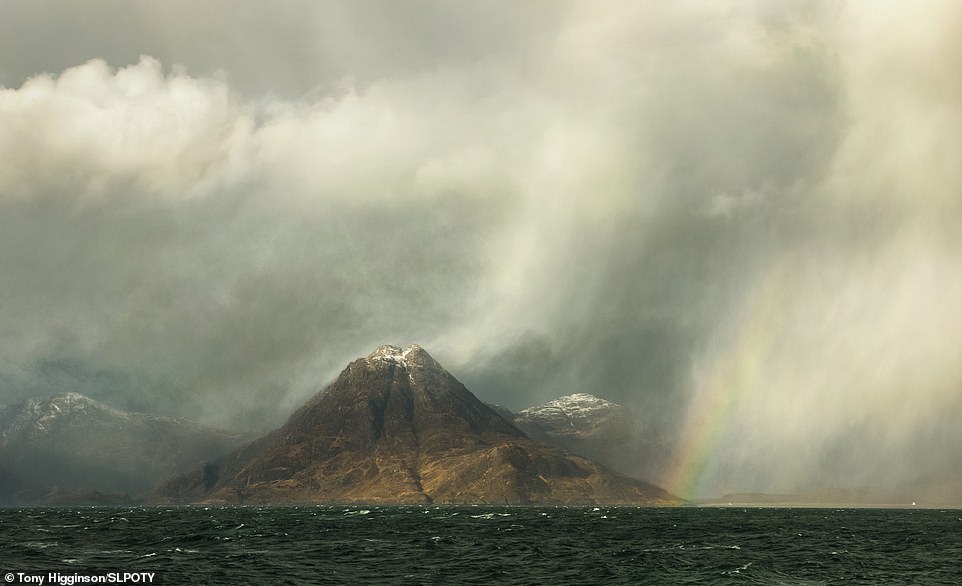 Tony Higginson scooped the top prize in the seascape category thanks to this jaw-dropping picture he took in the village of Elgol on the Isle of Skye during Storm Ciara in February 2020. He explained: ‘As a hailstorm blew over the Cullin mountains, I got lucky when the sun briefly appeared and illuminated the scene, adding that extra magic’ 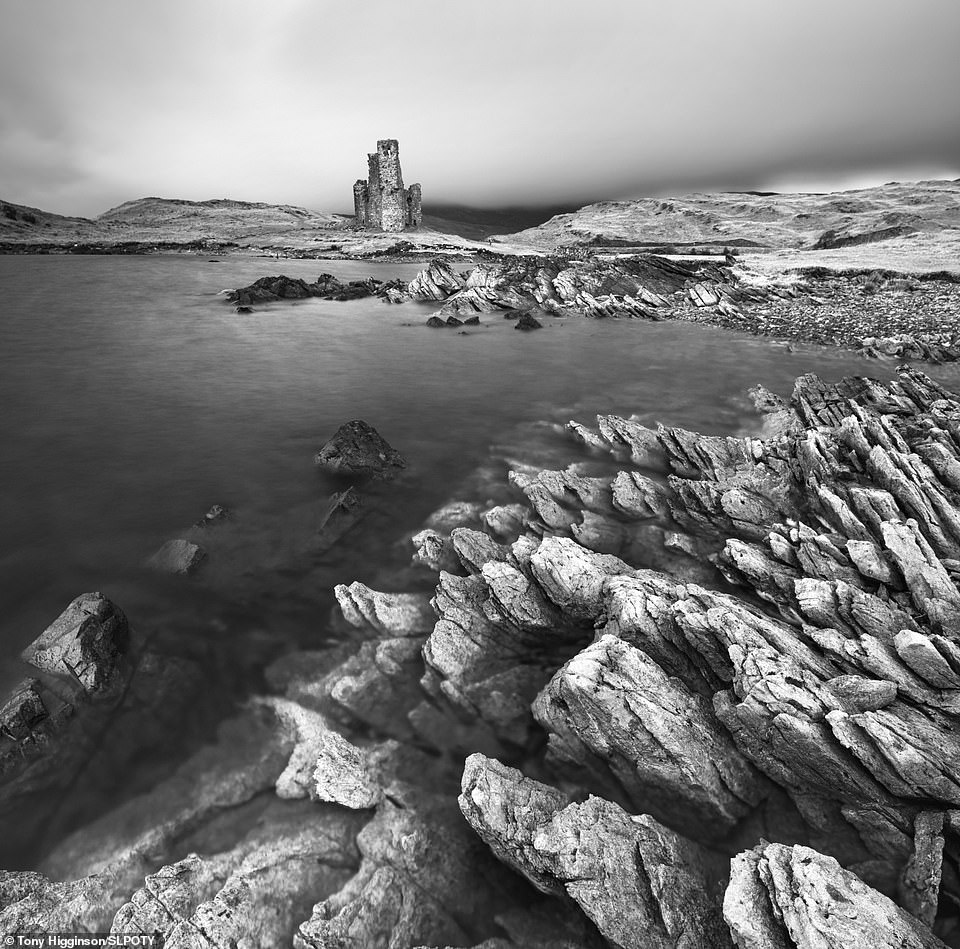 This incredible shot  – another by Higginson – was commended in the landscape category. It shows Ardvreck Castle on the shores of Loch Assynt in Sutherland in the Scottish Highlands. He said: ‘After spending some time photographing the details of the foreground rocks, I decided to include them in this larger composition using a long exposure’ 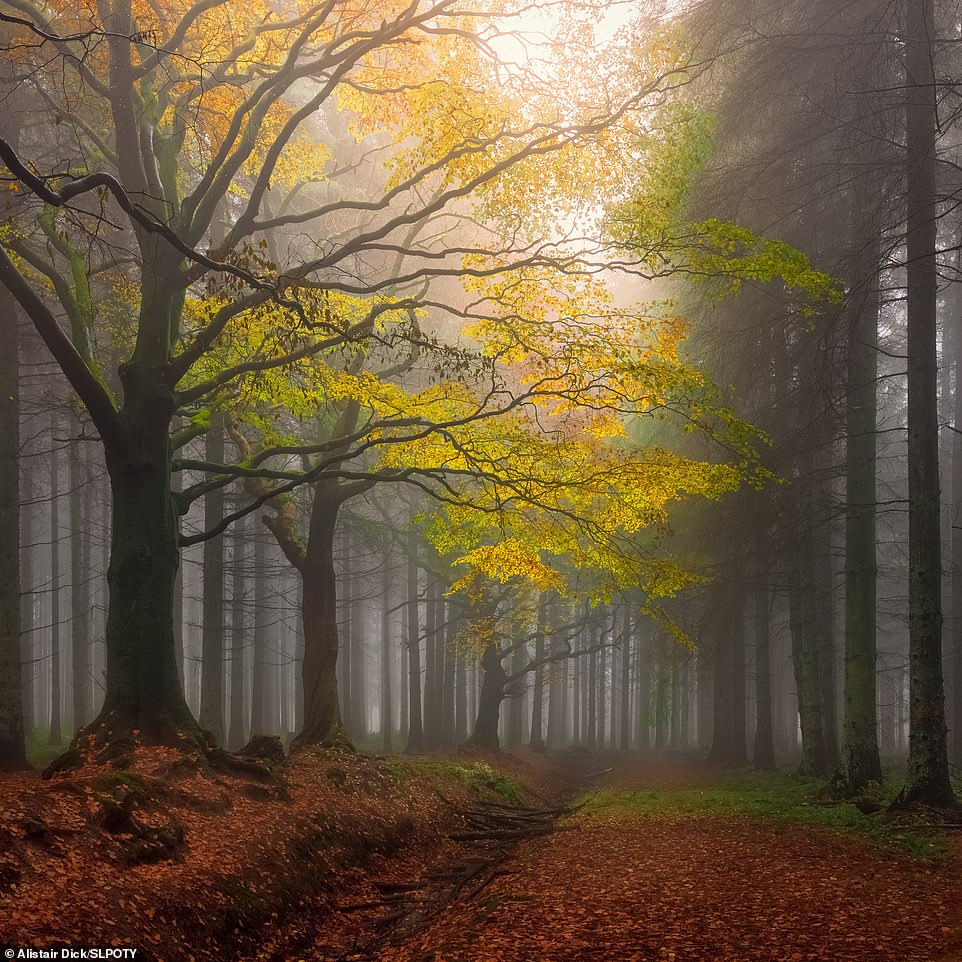 Alastair Dick claimed the runner-up spot in the treescapes category with this beautiful image he took in Beecraigs Country Park near Linlithgow. The photographer explained: ‘On a foggy late autumn morning, as time wore on, the light tried its best to break through the tree canopy, illuminating the gloriously coloured leaves when viewed from ground level’ 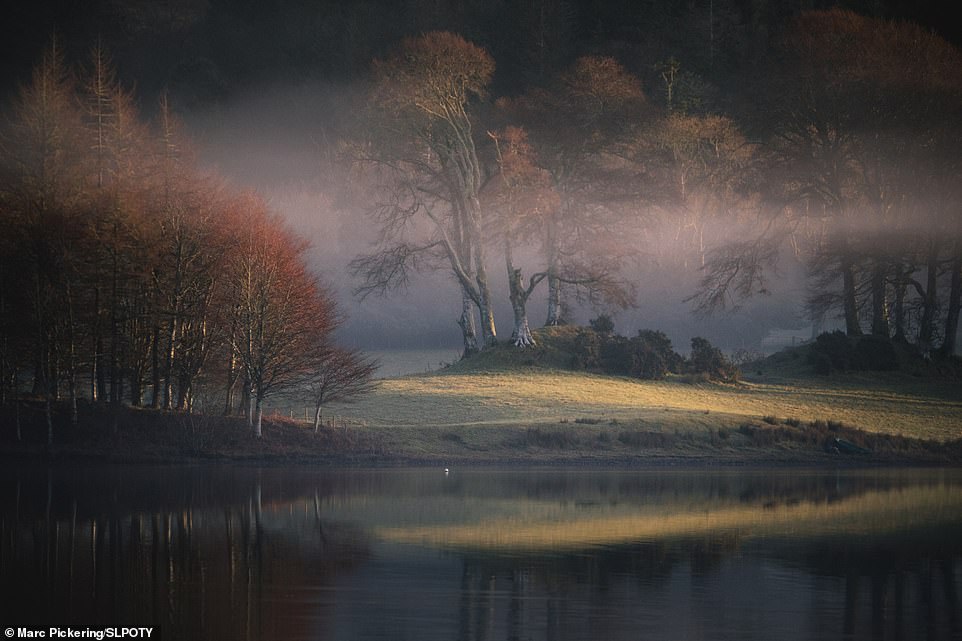 Marc Pickering scooped the top accolade in the landscape category with this serene scene. It shows the first light breaking through a low-lying mist over Loch Erdeline in Argyll. He said the light ‘created a beautiful scene as it illuminated the frosty ground’ 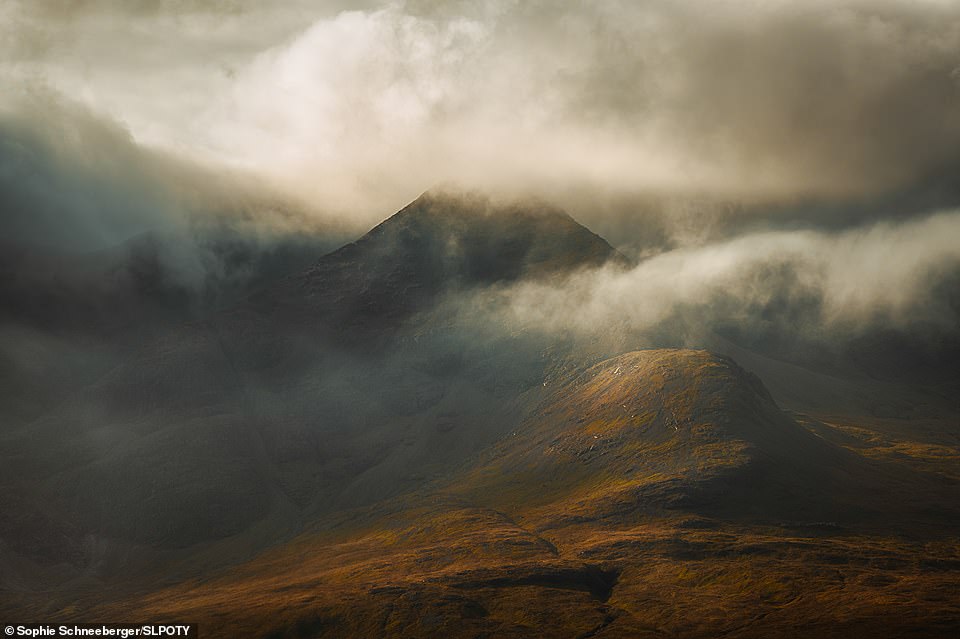 Taking second place in the landscape category was Sophie Schneeberger with this stunning image of the 3,162ft (964m) Sgurr nan Gillean mountain on the Isle of Skye. Sophie said: ‘Looking towards Sligachan, Sgurr nan Gillean revealed itself beneath these beautiful, glowing clouds. The scene lasted only a few seconds before the clouds obscured the mountain once more’ 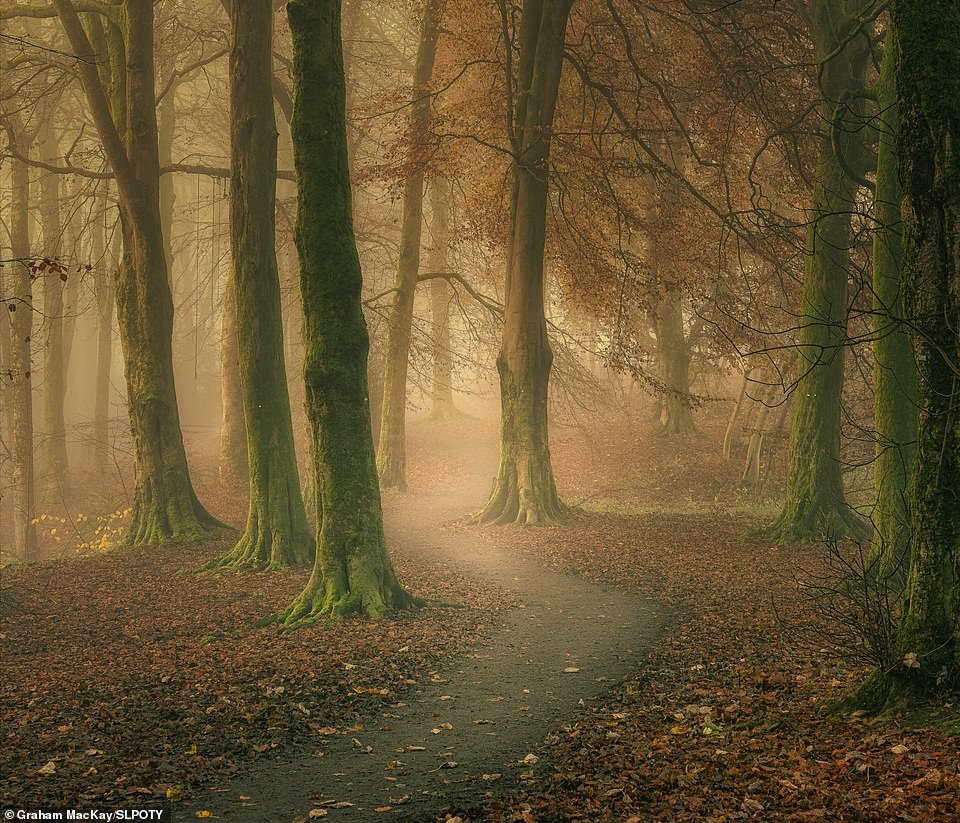 Graham MacKay captured this beautiful scene while walking through his local woods in Eaglesham, Glasgow. He points out how the early morning mist hanging in the air and the autumn leaves outline the path that leads through the trees. The image was highly commended in the treescapes category 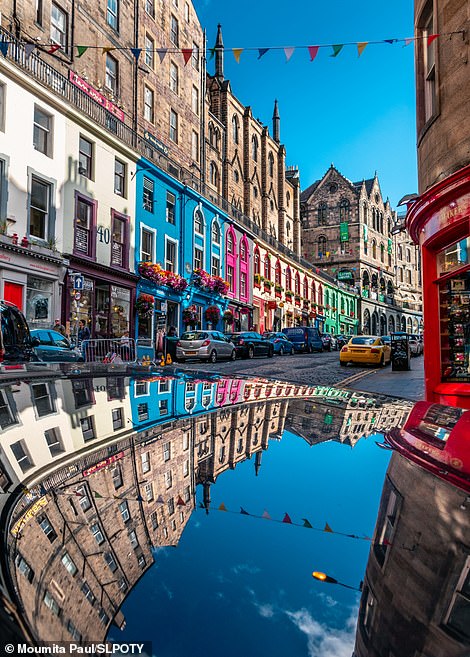 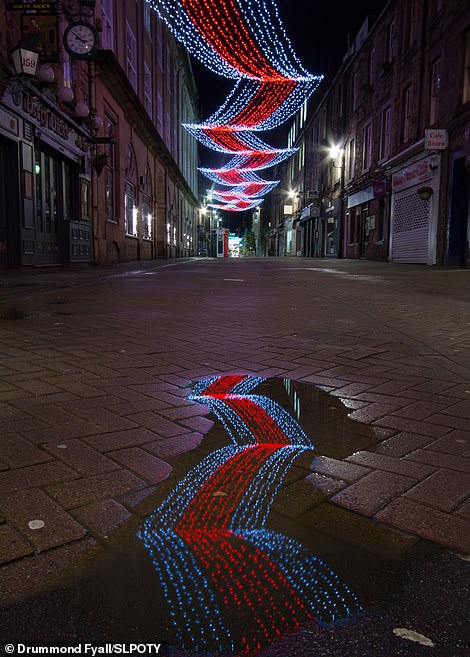 LEFT: The winner of the urban category was Moumita Paul with this amazing image of the reflection of colourful houses on a car roof on Edinburgh’s famous Victoria Street. RIGHT: Photographer Drummond Fyall was runner-up in the urban category with this haunting shot of Edinburgh’s Rose Street, which he called ‘Locked Down Christmas’. He said: ‘Lockdown meant the usually busy Rose Street was eerily quiet in the run-up to Christmas. The puddle was ideally placed to take advantage of the lights above’ 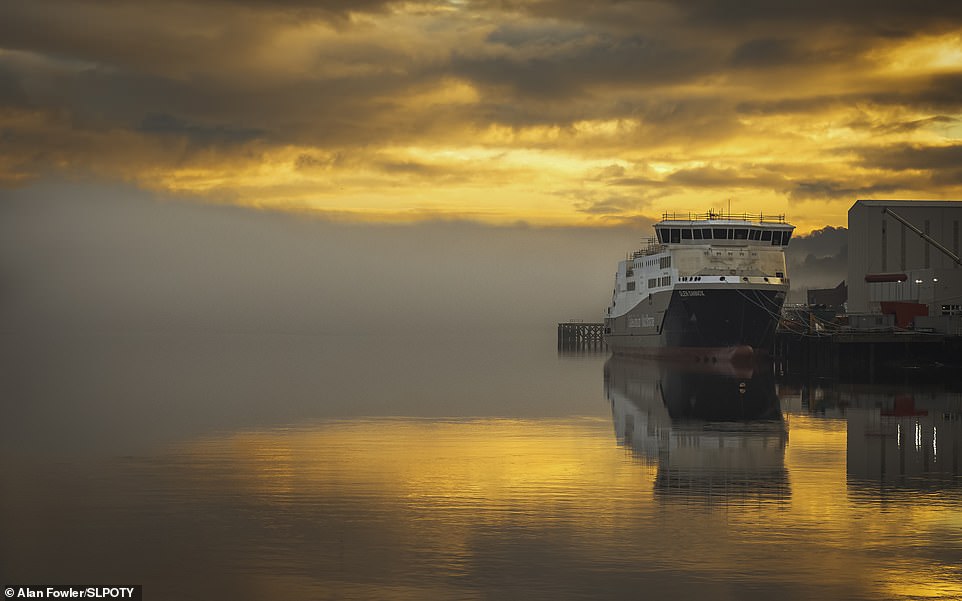 Philip Durkin took the runner-up spot in the seascape category with this mesmerising shot taken during ‘blue hour’ on the Isle of Harris. He explained it was taken from Bagh Steinigidh beach and visible is the island of Taransay – and ‘the hills beyond’