Commuters are facing long delays in Melbourne after train drivers were stood down for the second day in a row.

Drivers are refusing to drive trains on the new stretch of track work – in Frankston, Cranbourne and Pakenham lines – as they feel they have had inadequate training.

The matter was taken to the Fair Work Commission last week but it may take days to be resolved.

Several trainlines were experiencing delays or cancellations on Thursday as a result of the dispute.

The Belgrave, Cranbourne and Sunbury train lines were delayed because of ‘a driver resourcing issue’, Metro Trains said.

The Frankston, Pakenham and Werribee lines were also experiencing delays.

The Rail, Tram and Bus Union said the drivers were given an animated safety demonstration before being expected to drive on the new track, but many wanted a run-through without passengers first.

When their request was refused, they were stood down. More than 40 services were stopped on Tuesday due to shortages.

‘You’ve got a lot of drivers who are inexperienced (and) they are the ones who have requested the training,’ he told the Herald Sun.

A spokesman for Metro Trains said: ‘While we can’t comment on legal proceedings, we never compromise on safety and have plans in place to ensure services resume when the works are complete’. 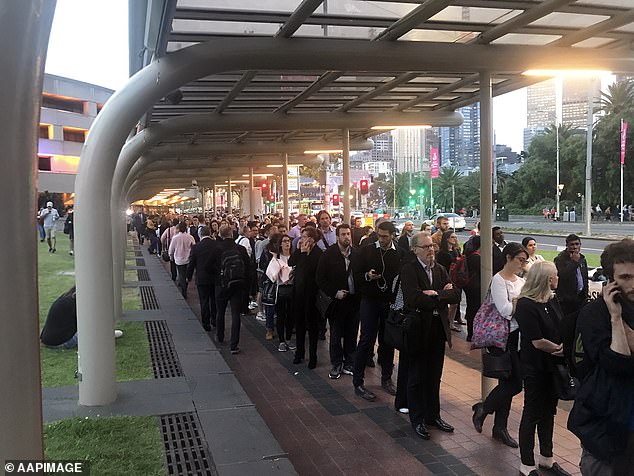 ‘We have seen construction companies work around the clock to return services earlier. Unfortunately with the action that is occurring today, this is absolutely the union putting passengers last.’

Commuters will also be hindered by striking tram drivers on Thursday.

Between 10am and 2pm the tram drivers will walk off the job over a pay dispute.