Police have released shocking footage showing a man going loco on a train.

Drunk Mark Abraham brought terror to the railway when he kicked out, stripped off, grabbed other passengers and turned the air blue during a rampage.

Abraham, aged 26, appeared before Blackfriars Crown Court for sentencing after he pleaded guilty at a previous hearing.

A bare-chested thug threatened passengers during  a journey on November 2, 2016 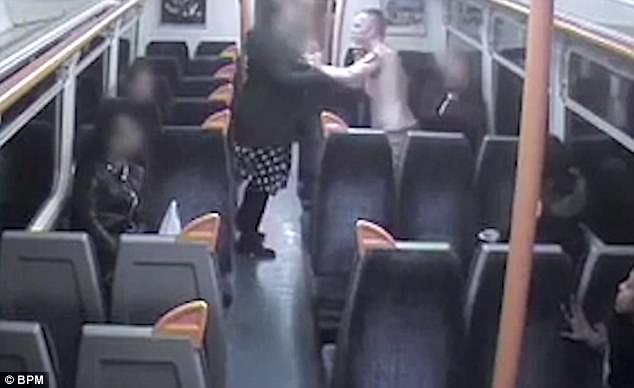 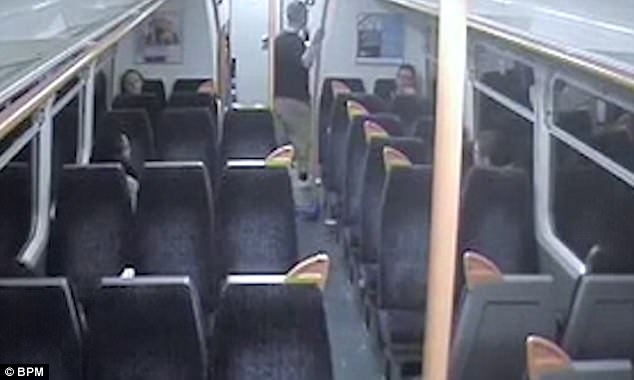 He was sentenced to 20 months in prison and ordered to pay a £140 victim surcharge.

The incident happened on board a service on Wednesday November 2,  2016. At approximately 8.30pm the emergency cord was pulled on the train, automatically applying the brakes.

The guard went to investigate and spotted Abraham; he was at the door to the driver’s cab kicking and swearing. As the guard approached Abraham, he saw that he had smashed a bottle of vodka on the floor and held in his hand a piece of glass.

British Transport Police said Abraham then approached the guard, threatening him with the glass and pushing him. The guard received a cut to his hand. At this point, police had been called by the train driver.

In the meantime, Abraham sat opposite a passenger. Thinking the passenger was laughing at him, Abraham then launched at him, shaking him violently and threatening to kill him. He then slapped the passenger.

Abraham then turned to a female passenger who he thought was laughing at him. He took off his shoe and threw it, narrowly missing her.

He then shouted at the train guard to open the doors to the train, which he was unable to do. The man then pushed the guard against the door and then threw punches at him.

Investigating officer, Detective Constable Ross McAlpine, said of the incident on the line between Gillingham and London Victoria: ‘In his drunken state, Abraham subjected passengers to a terrifying ordeal. He went from carriage to carriage, attacking and threatening innocent people.

‘Fortunately, our officers were able to quickly board the train and were able to detain him. We will never tolerate violence and will work hard to ensure that suspects are quickly detained and brought before the courts.

‘I would like to thank and applaud the bravery of the train guard and passengers on the train that evening. Knowing full well how dangerously Abraham was acting, they challenged his behaviour and may have prevented the incident from becoming more serious. ‘