At 19, Jasmine Valentic was right on track to fulfilling her dream of becoming a nurse.

The teenager from Wellington, New Zealand, had always wanted to help others and was in the middle of her second year at university, juggling hospital placements and study for her written exams with evening gym classes and weekend lunches with her friends.

So when she noticed a pea-sized lump on the side of her neck one morning in October 2019, she assumed she was developing swollen glands from the stress of her busy schedule and saw a doctor who confirmed she was simply ‘run down’.

But as weeks passed, the lump grew bigger and Jasmine to experience ‘extreme’ chest pains, inexplicable exhaustion and an irritating rash all over her body.

Trainee nurse Jasmine Valentic in her home in Wellington, New Zealand, on Wednesday, April 15, 2020, three months after being diagnosed with stage 2B Hodgkin’s lymphoma at just 19

By the end of November, she had lost 10 kilos in the space of a month.

She sought a second opinion from another doctor who ordered scans, blood tests and a biopsy of the lump which had already swelled to the size of an egg.

On January 21, 2020, two months shy of her 20th birthday, Jasmine was diagnosed with stage 2B Hodgkin’s lymphoma, a preliminary form of blood cancer that has spread to multiple lymph nodes but not to other organs in the body. 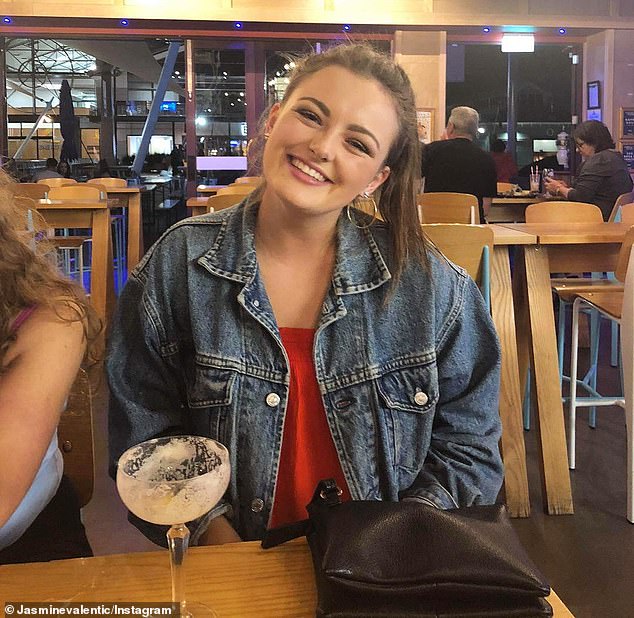 Ms Valentic at a restaurant with friends in April 2018, during her first year of nursing school

‘I was crushed when I found out, I sobbed. I just remember the words “I have cancer” repeating in my head,’ she told Daily Mail Australia.

Jasmine was heartbroken when she was forced to defer her third and final year of nursing school to start treatment, calling it ‘the hardest decision’ she had to make.

She is one of just 75 New Zealanders diagnosed with Hodgkin’s lymphoma every year.

Symptoms of lymphoma are easily confused with those of relatively harmless common viruses, which makes diagnosis difficult and often leads to long delays in detecting the disease.

Tiredness, fever, rashes and painless swelling of lymph nodes in the neck, armpit or groin are all telltale signs of Hodgkin’s, which are similar to the symptoms of mild respiratory infections and common colds. 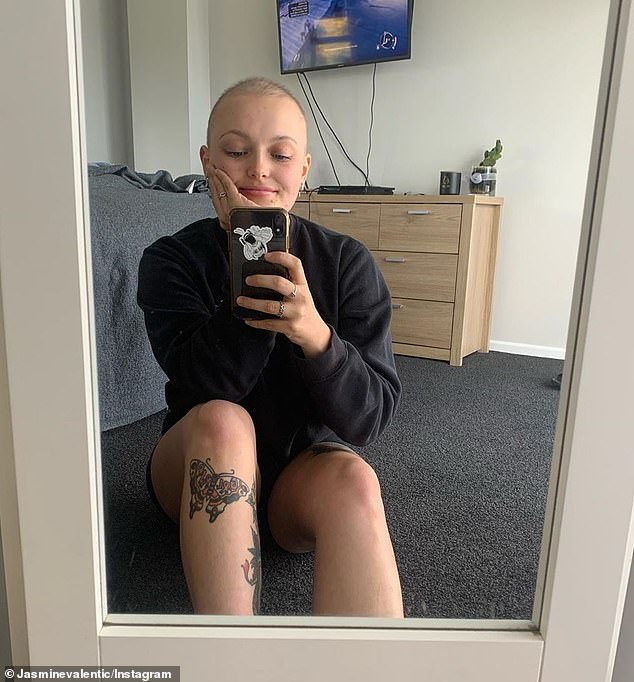 Now 20, the caring student nurse has four sessions of chemotherapy left to complete, with doctors confident that treatment will eliminate all traces of the disease. She is pictured on April 15, 2020.

If detected early, the chance of successful treatment and long-term survival improves dramatically, which means early intervention can be the difference between life and death.

Jasmine is one of the lucky ones whose cancer was caught before developing to stage four, by which point the disease has spread to the bones, lungs and liver, making it more difficult to eradicate.

Once the biopsy confirmed the lump to be cancerous, doctors immediately started her on a six month course of AVBD chemotherapy, a combination treatment for early stage lymphoma administered through a drip into a vein. 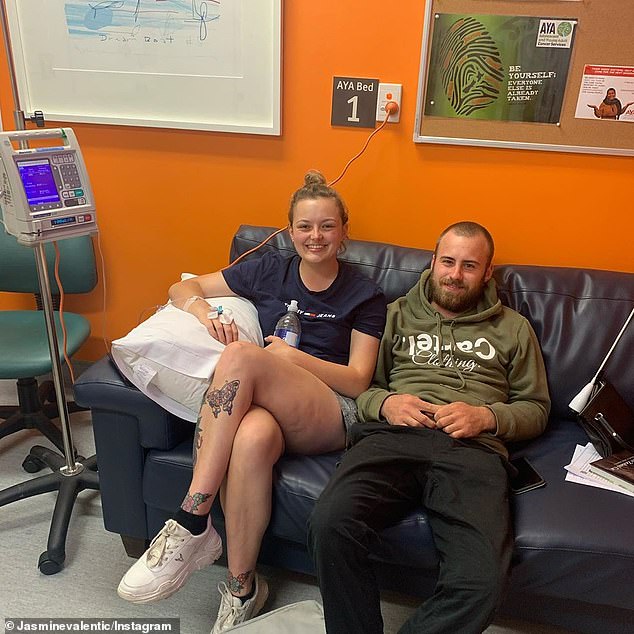 Ms Valentic accompanied by boyfriend Sam at her first round of chemo on Valentine’s Day, February 14, 2020 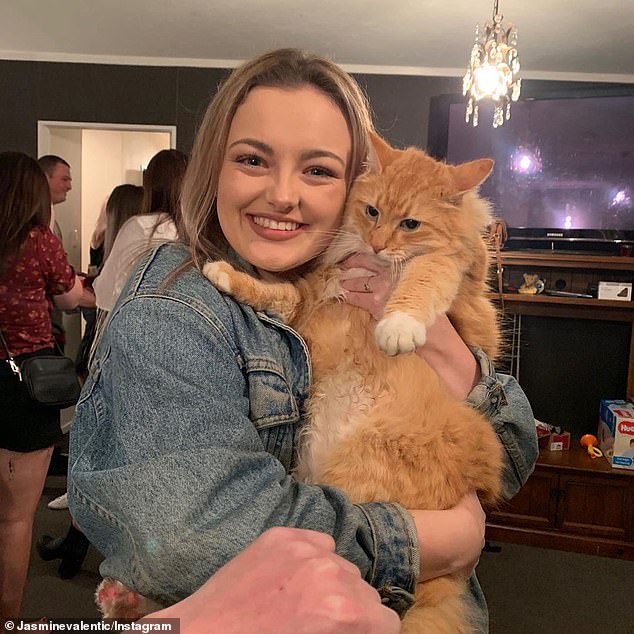 ‘I just don’t look or feel like myself. It’s hard to comes to terms with the new me,’ she said

Hodgkin or Hodgkin’s lymphoma is a cancer of the lymphatic system, part of the immune system, that begins in white blood cells called lymphocytes.

It is one of two main groups of lymphoma, the other being non-Hodgkin lymphoma.

Hodgkin’s lymphoma differs from non-Hodgkin lymphoma because of the presence of a particular cancer cell, the Reed-Sternberg cell.

The disease begins in a lymph node, usually in the neck, and spreads through the lymphatic system from one group of lymph nodes to another if left untreated.

The cause of Hodgkin’s lymphoma remains unclear, but risk factors include family history – with those who have a parent or sibling who has had Hodgkin slightly likelier to develop the disease – certain viruses, including glandular fever and HIV, and a compromised immune system, weakened by autoimmune conditions or lengthy periods taking immunosuppressant drugs.

Roughly 650 Australians and just 75 New Zealanders are diagnosed with Hodgkin’s lymphoma every year.

The disease most commonly develops between the ages of 15 and 29, and in older people over the age of 70.

She now battles constant nausea, lethargy and bloating, side effects of the cocktail of drugs doctors are confident will rid her body of all traces of cancer.

‘I just don’t look or feel like myself. It’s hard to comes to terms with the new me,’ she said.

Despite enduring such a frightening ordeal before reaching her 20s, Jasmine’s prognosis is good and her future looks bright with four sessions of chemo left to complete.

She is grateful for the lessons cancer has taught her, and hopes the experience will help her to become a brilliant nurse, her dream since childhood.

She urges others to understand their bodies and follow gut feelings about their health, no matter how young they may be.